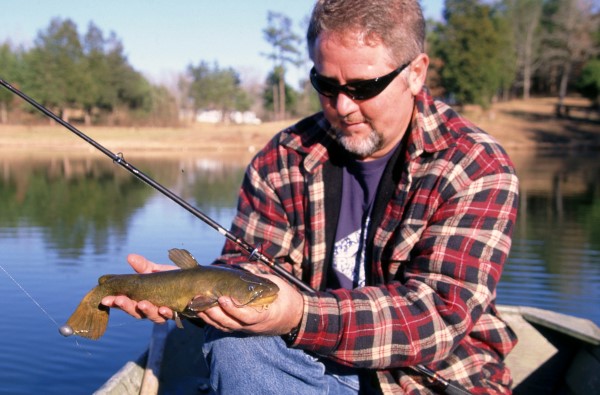 The bite may be better than you imagined, even on the coldest days.

I have a clear memory of the first time I fished for catfish in winter.

I was about 12 or 13 years old and going a bit stir crazy after being cooped up in the house for most of Christmas break. An unusually heavy snowstorm in Arkansas had made it difficult to do much outdoors besides build a snowman or make snow cream.

One of my wise old uncles suggested a good way to burn off some of my youthful energy: go fishing in a pond on his rural farm, just a two-mile walk from my home.

“Lots of folks don’t know it,” he said, “but this is one of the best times of year to catch a mess of nice channel cats or bullheads. Take some chicken liver for bait, cast your rig into the deepest water along the levee and then hold on tight to your rod and reel. If you hit the right spot in that deep water, you’ll get a bite almost immediately. And where you catch one cat, there will usually be a dozen or more stacked up like cordwood. Go try it and see.”

I didn’t have to be told twice. I put on some heavy coveralls, a wool toboggan and some gloves. Then I grabbed a rod and reel from the shed and a box of chicken livers from my grandmother’s refrigerator. After a short hike, I found myself standing in snow on the bank of my uncle’s pond, casting to the big cats that lurked therein, but never really expecting to catch one.

“If it’s eating-size cats you’re after, head straight for the nearest farm pond.”

To my surprise, my uncle hadn’t embellished his story like he often did. I baited my hook with big bloody chunk of liver, cast it into deep water by the dam and, before it hit bottom, a channel cat grabbed it and made a strong run. I set the hook hard with an upward sweep of the rod and soon pulled the croaking channel cat—a fat 5-pounder—up on the bank.

For the next two hours (before I got too cold and my teeth started chattering), I hauled in one catfish after another. I’d caught plenty of cats before, including quite a few big ones, but never as many as I caught that afternoon. During my short time fishing, I strung up a total of 20 channel cats and bullheads I proudly showed my uncle upon returning to town.

I didn’t know it then but that winter pond-fishing excursion would be the start of a fun tradition for me and my fishing buddy Alex Hinson. We had just finished a morning rabbit hunt on property owned by Alex’s neighbor, and as we walked past the neighbor’s farm pond on the way back to Alex’s house, Alex told me his friend had allowed him to stock some catfish in the pond.

“They’ve been in there three or four years now,” he said, “and some of them are getting pretty big on the catfish chow I’ve been feeding them. When spring rolls around, let’s see if we can catch some.”

“Heck, let’s don’t wait till spring,” I said. “Let’s go buy some bait and try to catch some this afternoon.”

Blues & Flatheads?
Will other catfish species bite in winter? Yes. Like channel cats and bullheads, blue catfish also remain active this season. Most follow schools of shad and herring, their favorite foods, so they can be tough to pinpoint in their river and lake homes. But peg a school this season, and you can enjoy fish-a-minute fun that may produce some giants.
Flatheads seldom fall to winter anglers in cold latitudes. Frigid water slows their motors to a purr, and studies indicate little winter feeding.

And so, within the hour, we found ourselves sitting in a johnboat over a deep hole in the pond, dropping liver-baited hooks into the murky depths. Before each bait touched down, a sassy channel cat or bullhead would have it. Alex caught a 5-pound channel cat, then its twin. I caught several over 3, plus a 2-pound yellow bullhead. Fifteen cats fell prey to our tactics.

Every year since then, during the Christmas or President’s Day holidays, we’ve made it a point to catch a few more of those good-eating winter cats. And it’s rare we don’t land a dozen or more on each of those trips.

Many novice anglers still labor under the false impression that catfish don’t bite in winter. That’s not true. Take channel cats and bullheads, for instance. The experiences I outlined above show the exciting potential for catching these fighters during cold months. Even more amazing is the fact that both species are now common targets for ice fishermen in northern states. Despite popular misconceptions, they don’t lie in the mud and sulk when it’s cold. They actively hunt food and bite readily even when lakes and rivers are frozen.

If it’s eating-size cats you’re after, head straight for the nearest farm pond. Many are stocked with channel cats and/or bullheads, and despite what you may have thought, winter is the best season for catching them in these environs. You can expect good action December through February, in the far North, in the Deep South, and all points between. Expect the best pond catfishing, however, when the water temperature is between 40 and 55 degrees.

Start by asking the pond owner to point out the deepest hole in the pond. During cold weather, that’s where most cats in the pond will congregate.

Fish from a boat if you can, lowering a bait straight down into the hole. My typical rig consists of a 5/0 Daiichi octopus hook, with a couple of split shot crimped on the line a foot above. When it reaches the bottom, I turn the reel handle a few cranks so the bait is a foot or so above the substrate where cats can better detect it. When bank fishing, I use a 1-ounce Rubbercor sinker instead of split shot and add a small cigar-shaped crappie cork on the line between the hook and sinker to float the bait just off the bottom.

In my experience, fresh chicken liver is hard to beat for bait. Cats quickly zero in on the scent and taste of poultry blood dissolving from the tissue. Some anglers prefer frozen livers, because they stay on the hook better, but fresh liver has more cat-attracting qualities. I weave my hook through each piece of liver several times, then put my reel in freespool and let the bait sink straight to the bottom. When bank fishing, a gentle lob keeps the liver from flying off on most casts.

Don’t sit in one spot too long. If a cat is nearby, you’ll have a bite before 15 minutes passes. If you don’t, move a short distance and try again.

If luck is with you and the catfish are biting, the action may end abruptly after you’ve caught a few fish. Once again, it’s time to move and try another location.

When you’re fishing for cats in winter, it pays to keep moving anyway, just so you can keep warm. This is not a sport for anglers who detest the cold. You’ll get chilly out there, even when you’re wearing the proper clothing. Your teeth will chatter, and your hands and feet will feel like popsicles.

Nice thing is, when the cats start biting, that frigid feeling disappears. Nothing in the world warms you quicker than battling a rod-bending cat.