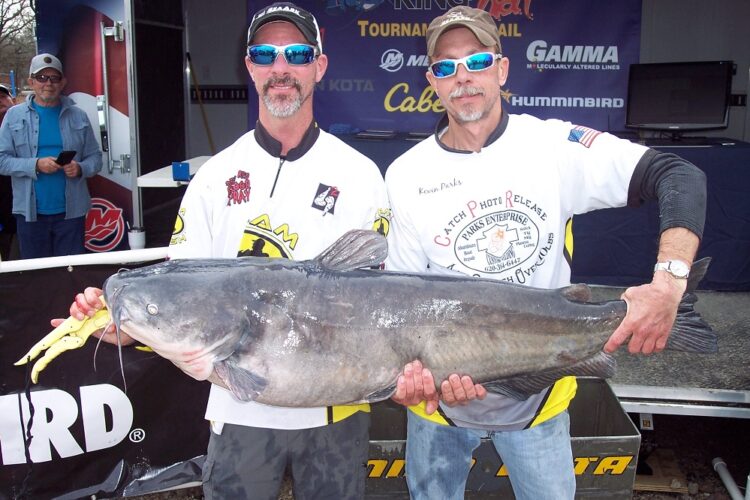 Anglers battled wind and rain and unsettled prefishing to test their catfishing skills on Lake Tawakoni at W. Tawakoni, Texas. The weather has been up and down for a month, making it difficult to pattern the fish.

Tournament day was peppered with rain until noon. The rain cleared as anglers endured a muddy weigh-in with winds at 5 – 10 mph. The muddy conditions around the boat ramp required King Kat officials to move the weigh-in site up on a hillside where it was not as muddy. A good crowd of catfish enthusiasts joined the weigh-in proceedings at West Tawakoni City Park.

Texas law allows catfish anglers to bring in two cats over 34 inches, so contestants were hoping for 4 fish over 34 and one good under to make up their 5 fish limit. A lot of big fish came to the scales. Only live fish were weighed in, and all fish were released immediately after being weighed.

Kevin Parks of LeRoy, Kansas and Ryan Gnagy of Tecumseh, Kansas took first place honors with a weight of 181.26 pounds. Their efforts earned them $4,500.00, plus an additional $300 Driftmaster Bonus for using Driftmaster Rod Holders on their boat.

Parks and Gnagy fished north of the Two Mile Bridge. They targeted flats in 20 feet of water, pulling planer boards to catch their fish.

As with most anglers on Tawakoni, they used shad for bait. Both anglers agreed, that their larger fish wanted large shad heads. They also agreed they would be back next year.

A pair of Texans grabbed the second-place spot. Steve Jones of Dallas, Texas and Travis Brown of Sanger, Texas, weighed in the second best total weight of 167.52 pounds. They earned $2,300.00, plus an additional $980 for Big Fish.

Jones and Brown also fished north of the Two Mile Bridge. They targeted creek channels in 16 – 40 feet of water. They landed 8 fish on the day using shad for bait. Their biggest fish, and big fish for the tournament pulled the scales to 63.6 pounds. Jones stated that the fish had been scattered due to the crazy weather in the area.

Third place went to the team of Marty and Roger Gerloff. They ended the day with 164.30 pounds in only 4 fish, and earned $1,600.00. The Missouri team fished the south end of the lake in 45 feet of water targeting ledges.

“We anchor fished all day,” reported Marty. “We used our Lowrance Carbon 12 to mark big fish before setting up. We would give them 30 minutes and move on if they didn’t bite. Our first fish came at 10:30 am. We caught two fish around noon and then we caught our last fish at 2:30. It was our biggest fish at 53 pounds.”

“We used cut gizzard shad all day,” continued Marty. We caught three fish on big shad fillets and other fish came on a big shad head. It was very windy starting off the morning and rained on and off until noon.”

In fourth place was Justin Cook of New Franklin, Missouri and Jason Shaw of Hallsville, Missouri. Their total weight of 153.92 pounds earned them a check for $1,000.00.

Cook and Shaw joined other anglers that fished north of the Two Mile Bridge. Their fish came from flats above creek channels in structure. They were fishing in 25 feet of water using shad for bait. The team landed 14 fish for the day.

Justin, who has won the Tawakoni tournament before, suggested the weather made it tougher in 2018. He said it was difficult to prefish due to the weather.

Another Texas team, David and Daniel Hanson, claimed fifth place with a total weight of 141.80 pounds. Their bag earned them $700.00.

The team targeted fish in very shallow water. They used shad in 2 – 4 feet of water. They caught more than 30 fish using a homemade shallow water pole. David stated that there had been a shad kill which pushed the fish shallow to feed.

“As always Lake Tawakoni is a favorite on the King Kat trail,” stated tournament director Jeremy Coe. “Not only do the anglers like it, but the staff does too. We always look forward to coming to town. It’s not the biggest place compared to other stops, but we think of this city as family. From the anglers standpoint, Lake Tawakoni is in the top catfish fisheries in the United States! We look forward to returning in 2018!”

There are a couple of important changes to the schedule for 2018. The number of tournaments has gone up to 20 and instead of two Classics, there will be only one. This year’s Classic Championship will be held September 14 & 15, 2018 on the Ohio River at Jeffersonville, Indiana. The total purse at the classic will be $110,000. First place will be a $50,00 boat rig.

Also, the points division this year will be worth $20,000! First place, based on the most points in the anglers best 5 finishes, will determine who wins $10,000. The other half of the $20,000 will be distributed among the next 9 places.