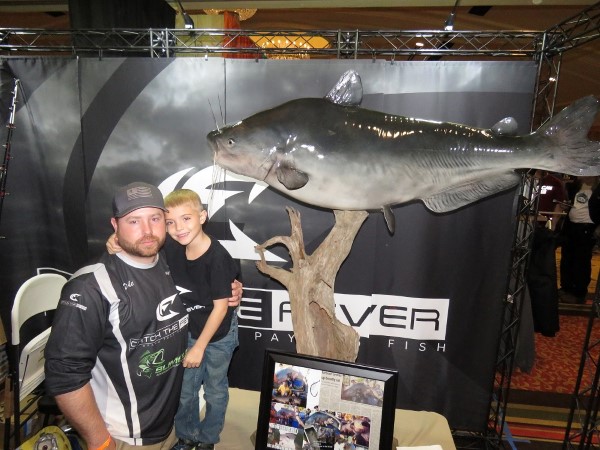 Hooker’s Terminal Tackle Mad Catter hooks were the beginning of a dream come true for owner, operator, and janitor, James N. Arwood. He had been wanting to  make his own custom hooks for years. In December of 2015, he started with several top selling fishing hooks and began studying them from the perspective of making them better.

After countless hours of thought, and bending hooks by hand and pliers, he came up with a design that is a blend of a circle and a Kahle hook. His design became known as Mad Catter Hooks.

After being tested on the water, Mad Catter Hooks were quickly accepted by numerous catfish anglers and Arwood’s dream was becoming a reality.

His hooks feature a super wide gap for large baits used by catfish anglers. They have a backset tip like a circle hook for self-setting and a two-position offset that functions as a traditional setting hook. The hook eye is backset for snelling. His Mad Catter Hooks offered the catfish world the best of both worlds.

One of the first users of Arwood’s design was Dale Russel Lowe, Jr. In 2016 Lowe put the hook to the test when he caught a 141-pound blue cat on the Mad Catter. He was fishing the Icebowl Tournament on John H. Kerr Reservoir (Buggs Island Lake).

“I love that the Mad Catter is a dual action hook,” praised Lowe. “I like to lock the rod down and let the fish hook itself when I’m fishing for blues. When live baiting for flatheads I turn the clicker on and set the hook the old fashion way without having to change hooks. The Mad Catter is the only hook I’ve used since November 2016.”

Visit the Hooker Terminal Tackle’s website at www.hookersterminaltackle.com to view their full line of catfish gear. Given their 100 percent, no questions asked, money back guarantee, what do you have to lose?