Why We Catfish: A Guest Editorial by Dieter Melhorn 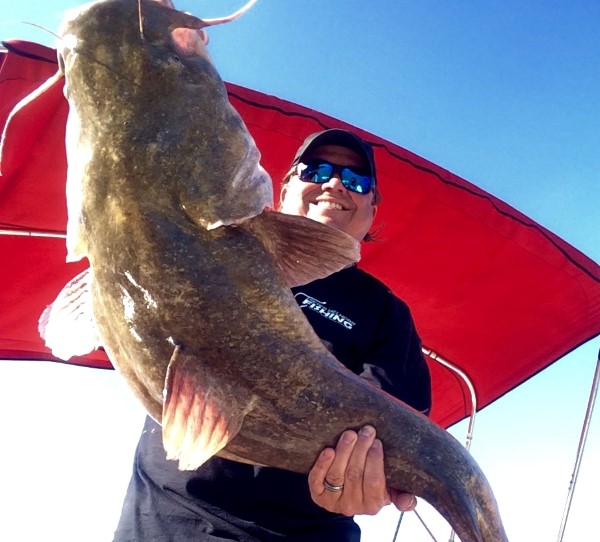 Catfish are my real passion.

Growing up in Gaston County North Carolina, a blue collar textile community in the south, my first experiences fishing were along the banks of the Catawba River. The mill my parents worked for owned a piece of property where the workers were allowed to go fishing, picnic and camp. On the weekends we would go fish there at night.

Sitting on the sandy shore, a Coleman gas lantern burning, and listening to country music on a battery powered a.m. radio, these trips are imprinted in my mind. Every trip was an adventure in pursuit of that elusive monster catfish that was rumored to lurk in the waters. Even then, back in the 70’s, we had heard the stories of the diver that worked on the bridge, seeing a catfish so big in the murky depths that he vowed he would never dive again!

My father passed away right before I turned ten years-old, but the trips we shared along those river banks are still with me. I wish we had more time together so that he could share more of his knowledge and love of the outdoors. His legacy was instilling in me a love, appreciation and respect for the outdoors, and that is the legacy I hope to leave behind for my children and others who I am able to reach.

Today my passion is for catfish, both big and small. I love saltwater fishing, especially for sharks, and I also chase stripers in freshwater, but catfish are my real passion. They are abundant and widespread across almost every waterway here in the south, they can be caught by various means on any kind of tackle, the fishing is relatively affordable, and they get big, REAL BIG!

Like most catfish fishermen I started out wanting to catch fish and master my craft. I learned to anchor, drift, tie different catfish rigs and catch bait. I was lucky to have mentors early on like Capt. Rodger Taylor and Mac Byrum, both legendary guides on the Catawba River chain of lakes. They all helped me along with way by sharing their knowledge of the whiskered beast.

Soon I moved on to fishing catfish tournaments, and even winning a few along the way. Catfish tournaments were simpler then, lower entry fees, fewer boats, and everyone knew each other.  Anyone that showed up in a fiberglass boat was a “rich guy”, as most boats were small jon-boats or beat up and re-purposed pontoon boats.

I can remember when a 35-pound stringer of five catfish on Lake Wylie would win any tournament. Today, it takes 70-plus pounds in three fish to win on this lake. The fish and the anglers have changed a lot over the years.

Around 2006 I became president of the Carolina Catfish Club at the urging of Mac Byrum. At the time the club was totally tournament oriented and I told him that if I took over we would focus our efforts and resources on conservation of the catfish resources. I also told him we would lose half our members in the process because most were old school fishermen and only interested in tournament fishing.

Well, we did lose half the members after I took over. However, we gained back three times as many over the next several years. The club focused on getting the first ever catfish laws in place on Lake Norman and Badin Lake. This law allowed only one 32-inch blue cat to be harvested. A few years later we followed up and got that same rule applied to four other lakes, and last year it was put in place on several bodies of water in the eastern part of North Carolina.

Today my focus is on creating fishing videos for Dieter Melhorn Fishing on YouTube, Facebook and Instagram. My goal is to educate anglers on how to catch catfish and have the confidence in their fishing abilities so that they feel good about putting a fish back so they can go catch it again one day. I think the best way to promote catch and release of trophy catfish is through educating anglers. I believe giving them the confidence to catch trophy catfish will make them more likely to let that fish go.

The YouTube channel has opened my eyes to how widespread and loved catfishing is throughout the country. I’ve been really blessed to meet a lot of people, both in person and online, that watch the channel and love the sport of chasing Mr. Whiskers.

Most of my fishing today is done on the Catawba River chain of lakes; Wylie, Norman and Wateree. These lakes have produced several blues in the 60-pound range for me, and multiple flatheads in the low 50’s. I also really enjoy fishing Ft. Loudoun and Watts Bar in eastern Tennessee for their monster blues and flatheads.

I’m often asked if I guide, and so far that answer has been no. Recently I’ve been putting together a business plan for a guide business, so don’t be surprised if you see “Captain” in front of my name one day! For now, I am enjoying pursuing catfish on my own schedule.