Why We Catfish: A Guest Editorial by Amy Smith 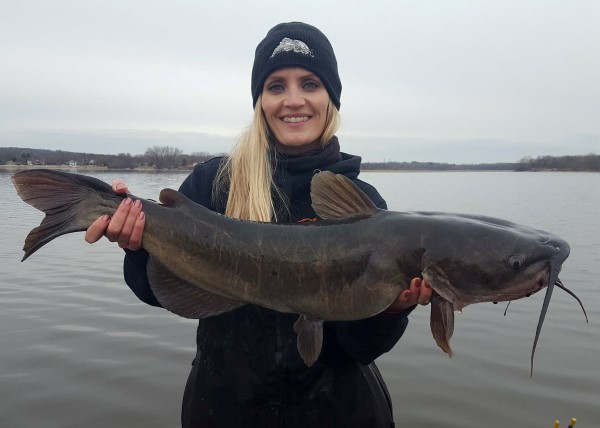 As a kid, fishing was only something I did occasionally while visiting my dad. He lived in a small Iowa town called Marengo where the Iowa River ran along the edge. For us, fishing was just another thing to do in the summer. And back then it was simple. When Saturday would come around we would grab the ol’ trusty Ugly Stik and some night crawlers (which we had spent the wee hours of the morning in search of) and head to the river as the sun would begin to rise.

We would then walk the banks in search of that perfect spot. Once settled, it was my job to find the best ‘Y’ shaped stick for a rod holder. I can remember taking so much pride in this responsibility. Then I would attempt my sidearm cast, attempt being the key word here. Once I was satisfied with my cast I would sit and wait, listening to the world wake up around me.

To change things up a bit, about once a year we would join a friend on their jon boat to set bank lines. I know there is much debate on this style of fishing, but to a kid this was super exciting! Staying up late, riding on a boat, and the continued suspense of wondering what was lurking down below on the hook was the highlight of the summer. But that was the extent of my fishing. It was just a little hobby enjoyed occasionally during the summer months.

It wasn’t until I turned 24 that I became more involved with fishing. I had recently started dating my boyfriend, Troy, who was an avid fisherman. He had grown up fishing with his grandpa on local lakes and rivers but was slowly working his way into the tournament world.

I remember him needing to go out and catch bait for an upcoming event, but his partner was unable to help. Being desperate, he asked me to tag along. And ladies, you know that you’re boyfriend is desperate when he has to ask his girlfriend for help…haha! It wasn’t long after that I knew I was hooked!

I am now 31 and consider myself an avid fisherman too! I have fished several tournament trails, received Lady Angler of the Year, been featured in ADVENTURESS magazine, traveled all over the country (including Canada), and am currently the only woman on the Whisker Seeker Tackle Pro Staff. I literally owe it all to my boyfriend for taking a chance on me years ago.

When I try to think about what the most important thing to me about catfishing is, I can’t put my finger on just one thing. Seven years ago, I would have said winning a tournament was the most important. But I know now, that isn’t what fishing is all about. Don’t get me wrong. Winning is wonderful! It has helped us grow in the sport, but it can also take away from the beauty of it all.

Every tournament angler knows that a tournament isn’t just a one-day event. There are several days that lead up to this one day. You have to find and catch bait, you have to pre-fish, and many times you may have to travel several hours away.

Tournaments consist of early mornings and late nights, and more times than not you have nothing to show for it. That’s where the beauty begins to die out. You stress so much about getting ready for the tournament and keeping a tight lip when amongst fellow anglers that you lose sight of the experience.

One such experience that comes to mind is when we fished Winter Blues a few years ago. We decided to make a weeklong trip/vacation out of it. We got so worked up about trying to find fish that once I caught a 30-pound blue, which I was proud of, we had to leave that spot right away and look for another. Then I caught another nice fish. But instead of being happy with my catch, we were upset that it “wasn’t the size we were looking for.” That really made for a long week and a disappointing tournament day when we didn’t bring in anything worthy.

Now with all that being said, there are several important things I have learned about fishing, just through tournaments alone, that have molded me into the fisherman I am today. CPR is one of the most important. Trying to keep a fish alive for hours and then release it back was just unheard of in my neck of the woods. Now it has become one of my top priorities. I am a huge advocate for it now, even if it’s not the most popular choice among others. I do still keep a few smaller fish for eating every now and then. After all, I am human.

I have also had the chance to try several styles of fishing. Learning to adapt to the body of water, different baits, or the weather for that matter, have been key. This is what I believe sets all fisherman apart from one another. If you have an open mind and the willingness to learn new things, you will go farther. I have open water fished, iced fished, bowfished (carp only), and will soon be attempting kayak fishing. My goal is to be a well-rounded and respected angler one day.

Traveling has also played a huge part in these last few years for me. It is probably my most favorite part of fishing. Without all these amazing adventures, I would not have all the wonderful memories! And the memories are what are most important to me now! From catching a new personal best or new species, to being featured on a magazine cover, to meeting new friends, getting sponsored, or to visiting beautiful places are memories to cherish.

None of this can happen if you don’t leave the couch. I have had the opportunity to travel to Canada and fish in 9 different states, soon to be 10, and meet some of the most incredible fisherman, in and out of the tournament world. I love meeting the people who I respect and look up to, and it’s always cool when they know who you are!

Each year I gain new memories in catfishing that I feel can’t be beat, but life always surprises me. I have had so many wonderful adventures over the years, but this year Troy and I have been able to do something a little different. We have been able to show a little of who we are through YouTube, which has been a whole new experience for us.

A few months back we had the pleasure of meeting the Northwoods Angling guys for an ice fishing episode. It was so much fun that we decided to try it again. We chose to do a show on shallow water anchoring for catfish. This has become one of our most enjoyable ways to fish.

The date was made for April up in Wisconsin. The morning came and we did not start off on the right foot. For like the first time ever, we were running late. Then about 30 minutes into the drive, we blew a truck tire. Thankfully it was an easy fix, but we were now an hour behind schedule on a 3-hour drive.

The Northwoods guys had been waiting at the boat ramp all morning. We felt so embarrassed. To top it off, the weather had changed. The temps dropped a bit since the previous days and now we were just hoping to catch a few to make a show. If only we knew how epic the trip was going to be.

Not long after casting out, Troy landed a 21-pound channel on his ice rod. Yes, I said ice rod. Those that know us know that we take our ice rod everywhere we go. Next I boated a 23-pound channel!

To make a long story short, we caught so many fish in such a short amount of time and had so much footage that the camera batteries were running low. We just knew the bite was only going to get better. So, we made the group decision to head back to the ramp to grill up some grub while we charged the camera batteries.

An hour later, we headed back out for the evening bite. It started off a little slow and we were getting nervous, but we moved to a new spot and before we knew it we were on fish again. We boated so many fish that day, and of great quality, it was crazy!

When 10 o’clock rolled around, we had to make ourselves quit. We were so tired but high on adrenaline it was hard to do. But we knew we still had a long drive home. After all was said and done, the Northwoods guys were able to make two separate shows of the day bite, an hour long LIVE stream on Facebook, and a night show!

The fish we caught were absolutely wonderful but having the opportunity to catch them all on film and being able to express the importance of CPR to everyone and help preserve that fishery was awesome! To top the memory off, Troy and I went back to the same lake a month later for an annual fishing trip where he then proposed to me!

Pass it along to others

Troy and I continue to compete in tournaments together and are always trying to top our personal bests in catfishing. But when we aren’t fishing for ourselves, we absolutely love to take people out.

It is so rewarding to be able to pass on our knowledge and help others catch a memory of their own! That’s especially true when we take out kids or those new to catfishing. To see the smile on their face or watch them fight a big fish for the first time is such a neat feeling. And I always have to stop and remember that if it wasn’t for the ones who did the same for us