Why We Catfish: A Guest Editorial by Joseph Dennis, Father and Sons Outdoors TV 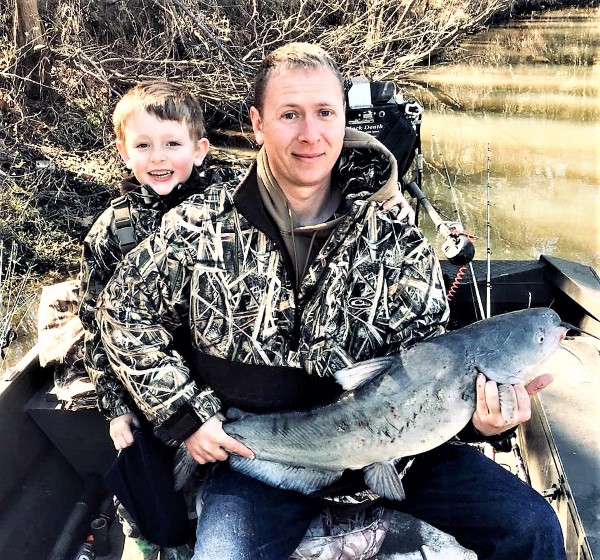 Editor’s Note: Forty-eight-year-old Capt. Joe Dennis lives in Bonneau, SC. His love for catfishing developed as a child. Living near the Santee Cooper lake system with a family of fishermen provided a lifestyle that he continues to pass on to other outdoor enthusiasts through his guide service and his show, Father and Sons Outdoors TV. The show airs on the Pursuit Channel at 6:30 on Wednesday nights.

I grew up on Santee Cooper with a father and grandfather who loved the outdoors. It didn’t take long for my passion for fishing to grow strong. Big catfish were always something we loved to fish for and living right by Lake Moultrie we had a target rich environment.

Living close to the lakes provided a never-ending opportunity of latching on to a monster when I fished for catfish. You never knew when a big blue or flathead would hit. I’ve seen many monster cats come from these waters including a 109-pound world record and a 108 pounder that came so close to breaking it.  Over the years I have seen countless other cats at 40 pounds or better. These days a 50-pound cat is no big deal but when I was younger, if you caught a cat that big it was a big deal. Back in the 70’s my dad and granddad caught a 50-pound blue and it was considered a monster then.

My favorite way to catfish on Santee Cooper is to drag rigs. When that big fish lays that rod straight out level with the water, man that’s an exciting sight. It’s always in my head that the next pull down might be a huge one and there’s always a chance of catching that fish of a lifetime here in Santee Cooper Country. That possibility keeps me going back.

The bond I have fishing with my dad and my late granddaddy was always something special to me. When I started the process of putting a show together with our military kids it took me back to the memories I shared growing up with them.

My best day fishing was not the day I caught the most fish ever. The memorable day came when me and my grandfather were fishing in the Cooper River. We had only caught one small cat and was fixing to leave when his reel started screaming off drag. We fought this fish for over 30 minutes. My granddaddy was close to 70 years old and he fought that fish just like a pro would. We finally got him in after the long battle. The fish was over 80 pounds. My granddaddy, a retired DNR officer for SC for 30 years, had caught hundreds and hundreds of cats but this was his biggest ever.

The name, Father and Sons Outdoors just fell right into place. The name represents the bond that a father and son share in the great outdoors. My cohost, Captain Chris Orvin, and I want to share these adventures with young anglers in a way that will keep that fire and desire to be in the outdoors alive until their deployed parents return and share outdoor experiences themselves.

Filming for the TV show and guiding here on Santee Cooper Country includes a lot of visitors who want to catch their personal best fish. Sometimes they catch it and sometimes they don’t. But when it happens it’s just as big of an adrenaline rush to me as it is to them. Watching the excitement in their faces is what I do this for. And, when a young angler catches a big fish–it’s twice as exciting.

The most important thing about catfishing to me is sharing this great sport with young anglers. Watching them catch a big fish is a thrill we all love.