Why We Catfish: A Guest Editorial by Melinda Folsom 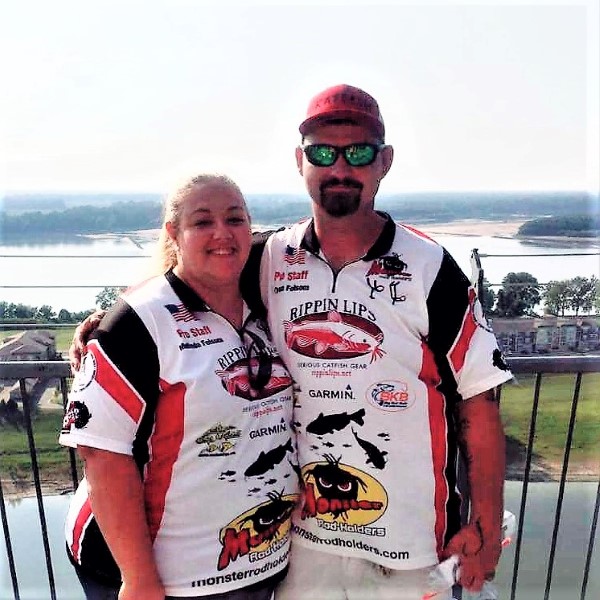 Editor’s Note: Melinda and Bryan Folsom are known to their friends as Backwoods Catters. They have a love and a passion for catfishing that is ingrained in their psyche and it is not by accident. Catfishing is how they celebrate holidays and how they enjoy family time together with each other, their girls, and their friends.

As the sport of catfishing grows, so grows the number of women participating.

Bryan taught me to catfish. We began Catfishing from the bank of our home river system, the Coosa River. The Coosa is not a huge river. It runs from Lake Allatoona just north of Atlanta into Alabama past Gadsden. On the Georgia side, it maybe 65 yards wide and averages 25-30 foot deep. The Coosa is our go-to river when we take our girls fishing.

The past three years we have been traveling three hours one way to fish the Hold’em Hook Catfish Trail on every fourth Saturday of the month. Like most people who fish Wheeler Lake and see firsthand the huge catfish it holds, it’s hard to go fish any other body of water.

Catfishing means a lot to me. It’s not just a hobby. It’s something I can do that lets me relax. Everyday life is stressful, Catfishing isn’t. Catfishing is peaceful even when every rod on the boat is going down!

Catfishing allows Bryan and I to get away together and enjoy time together as a couple. Most couples go out to eat and watch a movie for date night. Not us, we go fishing! Our anniversary, Valentine’s Day, and birthdays revolve around fishing trips.

We take our girls, Emily (8) and Sarah (5), fishing when the weather permits. They enjoy fishing almost as much as we do. They just don’t like crazy weather or bugs with their fishing trips. We love to take other family members and friends fishing. We don’t take them out in search of their new Personal Best, just for a good time on the water. Anytime you can share the great outdoors, it’s a great day!

I have many great and memorable moments fishing, but one, in particular, comes to mind often. We brought one of Bryan’s friends and Co-workers, Johnny, along to Wheeler. It was three November’s ago. We were fishing the Hold’em Hook Christmas for Kids charity event.

This was Johnny’s second or third time fishing with us, but his first trip to Wheeler. Due to the weather, we were allowed to trailer to any ramp on Wheeler Lake. It was raining with 25+ mph winds from the west. To this day it is the worst conditions I have ever been in on Wheeler. The winds and gusts caused 5 foot+ white caps. It was rough waters for sure.

We put in at the KOA boat ramp across the river from the Bowns Ferry Nuclear Plant. Our plan was to fish out by the plant, but because of the rough water, we had to find shelter from the wind. We managed to anchor behind a small rock wall just above the power plant in shallow water.

We were only able to cast out four rods but managed to stay still. A rod went down closest to Bryan, he could feel it was a good fish so he handed it to me and I passed it to Johnny. He was so excited. Once we netted the fish and it was in the boat, he hollered like he won the Lottery! The tournament allows anglers to weigh in one Big Fish and one fish closest to 20 pounds. We already had our 20-pound catfish and now we had Johnny’s Big Fish that was around 40 pounds.

Since the water was rough we decided to start crossing back to get closer to the ramp with almost two hours of tournament time left. Once we got back out in the open it was difficult to cross directly and we had to go at an angle. Needless to say, I got soaking wet! I never complained though, I just wanted Bryan to get across safely.

Poor Johnny was bouncing up and down from the waves and had hold of whatever he could grab! He told Bryan I was getting soaked and he needed to hurry up because it was also 50 something degrees! Being soaked through four layers of clothes in that temperature is not healthy. We decided to go ahead and head back to weigh-in instead of trying to fish longer.

Johnny’s 39-pound blue didn’t win the tournament but the whole experience was worth it just to watch Johnny with his big fish.

Afterwards, Johnny insisted that Bryan buy me dome bigger diamonds since I didn’t complain at all about getting wet on the journey back across the lake.

Other than fun family fishing trips and following the trail in Northern Alabama, another great opportunity we have is meeting new people from across the country. Traveling out of Georgia to fish other events and attending the Catfish Conference, allows us to meet fellow catfish anglers who love this sport as much as we do.

I never thought that I would know people who live in Tennessee, South Carolina, Kentucky, Ohio, Illinois, Montana, even from California and be able to call them Friends. Catfishing has added so many men and women to my family. They are the greatest people you will ever meet!

Melinda’s love for the sport led her to create a social media page that emphasizes lady anglers. She called it Whisker Chicks and you can follow it on Facebook. The group has grown to more than 300 women members. That’s more than 300 women who love to catfish.
“Some may look at our group and think that’s not many,” offered Melinda. “Most groups have well over 1000, but 300 women who love to catfish makes this group special.”
“The group is all about bringing fellow lady anglers together,” continued Melinda. “It gives them an opportunity to show their skills, ask questions, give feedback and share products just for us ladies.”
The Whisker Chix group and her observations and discussions with other cat women at tournaments and other catfish related events is the basis for Melinda’s efforts to put an all ladies catfish tournament together. She has named it Chick Fight and has scheduled it for Saturday, April 6, 2019.
Melinda’s love for fishing Wheeler Lake, and other’s desire to fish it, made it the natural choice for the all ladies tournament. Chick Fight will launch out of First Creek Boat Ramp, Joe Wheeler State Park, Lake Wheeler, Rogersville Alabama.