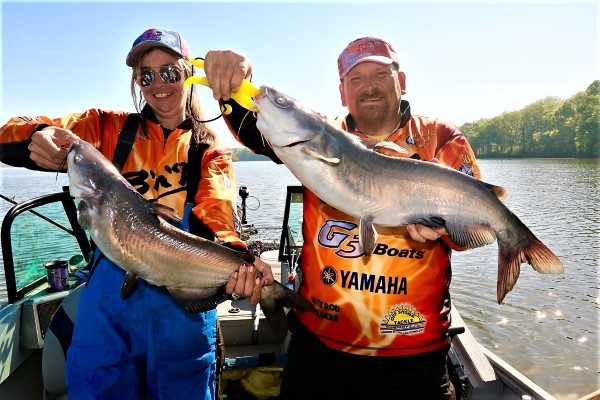 Staying on the move is the key to catching November’s blue catfish.

November is a great month for catching blue catfish, and this time of year, they can be found in many different depths scouring the bottom for dying baitfish. This presents a problem for anglers trying to pinpoint a specific fishing hole where catfish are corralled, but savvy anglers have a solution that gives plenty of hungry blues a shot at grabbing their bait.

Drifting is the key to covering lots of ground, fishing at multiple depths, and targeting blue cats without wasting time.

Ezra Phillips of Pelion, S.C. loves fishing for blues this time of year, primarily on his home water of Lake Murray where drifting is his favorite technique.

“When drifting, you’re always moving, so there’s no fear of anchoring down in a dead hole and wasting an hour. At the very least, you’re moving into and out of productive catfish holes, so I never feel like I’m wasting time or like I’m in a totally wrong place. And while drifting, your bait will drag through 60-foot deep holes, 15-foot deep holes, and 5-foot deep holes. You’re covering a lot of ground, and also hitting every depth. That’s huge, especially this time of year when the cats are plenty hungry, but can move around a lot from day to day,” said Phillips, who fishes from a pontoon boat like many other catfish anglers.

What do you need?

Six to eight rods with 6500-sized baitcasting reels, circle hooks, slinky weights, 65-pound test line, barrel swivels, sturdy rod holders, and plenty of fresh bait — either live, cut, or both — are all you really need for this type of fishing. Drift socks and a good depth finder, while not necessary on most days, are other tools that can be of great assistance.

How do you drift?

Phillips likes finding a defined point, like a bank, a bridge, or a marker buoy to use as a starting point. Then he points his pontoon boat into the wind or current so that he will drift backwards. Next, he baits and casts each of his rods and places them in rod holders. He lets out a different amount of line on each reel. He’s not real particular about how much line he lets out, but he wants all of his baits to be plenty deep enough to drag the bottom, and he also wants them to be different distances away from the boat.

And once all the lines are out, Phillips lets the boat settle into whatever drifting pattern the wind and current take it. Next, he decides whether or not to deploy a drift sock based on how fast he is drifting. On some days, he drifts with none, but he has used as many as three at a time.

“I would rather have one out than none, and I’d rather have one or two out than three. But I’ll use whatever it takes. I want to stay drifting under a mile an hour. Also, if one drift sock slows me to .7 and I’m not getting bites, I’ll throw a second one out to slow me down more. It’s different for each day, but I always want to drift slower than one mile an hour,” advised Phillips.

What if no current/wind is present?

When not enough current or wind is present, Phillips cranks his outboard and puts it in reverse, maintaining that sub-1 m.p.h. speed. He still likes having a drift sock out to help slow him and to help keep him running a straight line.

Using slinky weights instead of pyramids or egg sinkers allows the rigs to slide through whatever sunken debris is on the bottom. These weights slide onto the line above a barrel swivel that is finished off with an 18-inch leader. Phillips suggests placing slide-on, oblong corks between the barrel swivel and the hook to pick the bait up off the bottom.

With his drift underway, Phillips just keeps his eyes on the rods while he moves across the water. He often looks at his depth finder just to make note of the changes in depth and terrain. He wants to drift in lines that put him in different depths, but if he’s catching plenty of fish and staying relatively the same depth, he is okay with that.

What if you catch a lot of fish in one small area?

Concentrated catches happen often, according to Phillips. And while some anglers decide to anchor down on those small, productive areas, Phillips resists that urge, but he definitely gives that same area another chance or two. Or three or more if it keeps producing.

“When I catch multiple fish in one small area, once they stop biting, I’ll pull in my drift socks and motor back up to the beginning of that area, then I’ll drift back through. That’s one time it’s important to have a depth finder that can track your travel route. You can go right back to drifting the same line.”

“If the bite stays hot there, I might drift it several more times, but I won’t anchor there. Anchoring takes a lot of time, causes a lot of commotion in the water, and just isn’t necessary. If it worked drifting through once, it will work again,” said Phillips.

What size fish can you catch while drifting?

“Another great thing about fishing this way is that you’ll catch fish of all sizes. You’ll catch plenty of fish ranging from 5 to 25 pounds—great for eating and for numbers. But you will catch trophies this way too. I’ve caught multiple blue cats over 65 pounds this time of year, and my personal best is 82 pounds. I caught them all while drifting,” Phillips said.

Another tip he offers other anglers is to use circle hooks, and to never pick up a rod until it is fully loaded. Leave that rod alone if you’re seeing it get little bites or pull-downs. Once it’s bent over and stays, then the fish is hooked and it’s time to reel it in.

“You’re covering a lot of ground, and also hitting every depth.”

When fishing this way isn’t working for you, Phillips suggests drifting over completely different areas. If you’ve tried smooth bottoms and haven’t caught anything, find brushy or rocky bottoms to drift over next. He has found that fishing this way covers so much water that he will find fish as long as he doesn’t get stuck in a rut of looking for only one type of bottom.