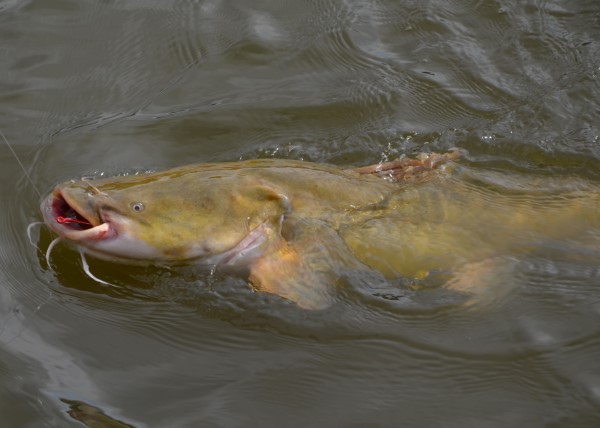 A stealthy approach and live bait are keys to successful flathead fishing.

From Pickensville, AL, to its confluence with the Alabama River to create the Mobile River north of Mount Vernon, AL, the Tombigbee River doesn’t receive much pressure from catfish anglers, but it can produce quality fish.

“The Tombigbee River is a hidden catfish gem,” advised Joey Pounders, a tournament angler from Caledonia, Miss. “I’ve caught quite a few catfish bigger than 50 pounds in it. We might catch a 40-pound blue and a 40-pound flathead from the same hole. The lower river is a relatively isolated area so it doesn’t receive that much pressure. Even the people who do live in that area mostly fish for bass and crappie.”

The Tom Bevill Lock and Dam at Pickensville form the southern boundary of Aliceville Lake. Straddling the Mississippi-Alabama line, it spreads across 8,300 acres. Farther downstream, the Heflin Lock and Dam create the 6,400-acre Gainesville Lake in Sumter County, Ala. The Black Warrior River hits the Tombigbee near Demopolis. Throughout the system, anglers can find big catfish.

“Anglers have a great chance to catch trophy catfish anywhere in the Warrior and Tombigbee river systems,” detailed Chris McKee, an Alabama Department of Conservation and Natural Resources fisheries biologist. “In May and June, catfish move up the tailraces below Demopolis, Aliceville and Gainesville reservoirs to spawn, but these areas hold really good catfish numbers all year long. For flatheads, look for large laydowns where the river channel hits the bank.”

When seeking flatheads, Pounders and his tournament partner Jay Gallop look for blue rock walls. Actually, steep banks of hard clay, these blue rock walls create nearly vertical bluffs where water drops off quickly. Just a foot or two off a wall, water might plunge to more than 20 or 30 feet deep. Sometimes, a ledge protrudes from the bank and then drops rapidly into deep water. At times, big cats lurk on the ledge, but more often, they hover near the bottom in extremely deep water.

“We like to fish banks that go straight down and that’s typically a blue rock wall,” Pounders explained. “Those blue rock walls have holes, crevices, and ledges that have been cut out by water movements over the years. Cats get in those places to hide and ambush bait. On the depth finder, it might just look like a solid, barren rock, but there’s fish all in it. Sometimes, we won’t see a fish on the electronics, but we’ll soon have four 20-pound flatheads in the boat.”

Flatheads also like woody cover, frequently hiding in underwater forests to ambush bluegills, bullheads, shad and anything else that looks tempting. Along a bank loaded with logs, flatheads might lurk anywhere so pick isolated trees that create the only cover in a stretch of river. A blue rock wall with a fallen tree or other woody objects next to it makes an even better flathead honey hole.

“We fish around those walls and look for secondary structure like treetops, rocks or anything else on the bottom,” Gallop said. “Big catfish will come out of the structure to get a bait. Current keeps the bait moving and concentrates catfish into little eddies. If fish don’t bite in one hole, I’ll move after about 25 to 30 minutes.”

River bends also make excellent places to find big flatheads. Since water moves fastest around the outside of a bend, currents scour holes on that side of the river. In addition, trees, branches, and other debris fall into those depths, making a good flathead hole even better.

Approach any good spot with caution. Shut down the outboard motor well away from the hole and drift in with the wind or current if possible. If that’s not possible, use the trolling motor. Don’t anchor directly over a hole. Instead pick a spot nearly a casting distance away from it. Whenever possible, tie up to the bank for the quietest presentation.

“Keep really still and quiet while fishing for flatheads,” Pounders emphasized. “People can’t expect to sit directly over a tree laying 15 to 25 feet below the surface and expect to catch fish while jumping all over the boat. Watch fish in an aquarium. If one fish moves, they all move like birds in a flock. If we spook one fish in the cover, they will all spook. I don’t even like to use the spot lock on the trolling motor to stay over a good spot.”

In a good spot, make a double rig with a 4-foot weight line and a 12- to 18-inch hook line with a snelled 7/0 or 8/0 wide-gap circle hook attached to the shorter leader. Even a flathead resting on the bottom looks up to spot prey. When fishing deeper than 30 feet, anglers might want to use a 5- to 6-foot weight line. Bait the hook with fresh shad, the bigger the better, when targeting giant flatheads.

“Always try to catch fresh shad on the fishing day so they are as lively as can be,” Pounders said. “I also like to keep the bait off the bottom. Watch shad in a baitwell. With a hook in it, a shad will lay still on the bottom if given a chance. If it’s elevated, it’s constantly swimming. That shad does the same in the river. If it can’t get to the bottom, it will keep swimming. When fishing with a longer hook line, I sometimes slip a wine bottle cork on it. A cork resembles a stick or piece of wood drifting in the current and looks more natural than a bright plastic bobber.”

Although aggressive predators that normally prey upon live bait, flatheads occasionally might snatch a fish chunk or strip. When fishing current, a strip bait or fillet mimics live bait. To fashion a strip bait, fillet a shad, skipjack or other baitfish. Run a hook through the ribcage. Rigged correctly and placed above the bottom, a strip bait resembles a live fish as it undulates in the current while succulent juices ooze into the water.

“When I’m not using live bait, I fillet a shad,” Pounders recommended. “It makes a lot better movement in the water than just a fish chunk. I take a 9-inch shad and fillet off a side of it. I insert the hook one time into the end of the fillet, roll it over and hook it again so I have the hook going through both sides. Hopefully, that big, bloody bait will attract a big cat.”

Carolina rigs also work great when fishing live bait. Thread line through a hollow sinker, which allows the baitfish to swim more naturally. In addition, when a wise old flathead grabs the baitfish, it doesn’t feel the sinker with the line slipping through it. Therefore, it might more readily swallow the offering.

Flatheads go almost dormant in freezing temperatures, but the lower Tombigbee River system generally stays warm enough for catfish to remain active all winter. In the fall, catfish become more active as temperatures drop and boat traffic decreases. Anglers can catch a big flathead on the Tombigbee at any time, but the best fishing generally takes place from late September through March, unless the water temperature drops below 40 degrees. In this system, any bite at any time could produce the fish of a lifetime.