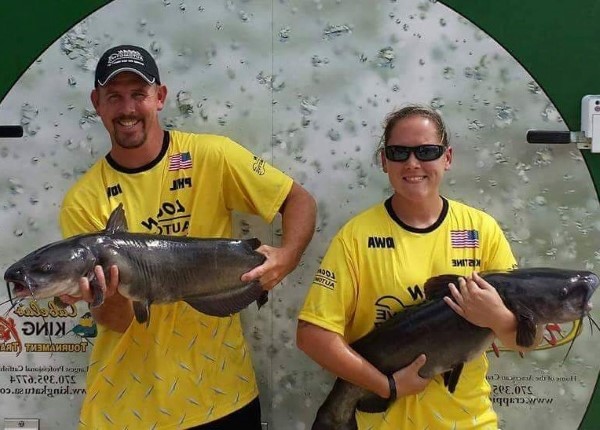 Editors Note: Philip Brown is a cat man that loves to travel in search of big catfish. His travels have taught him a thing or two that can be helpful the next time you plan a traveling search for Mr. Whiskers.

Traveling catfish anglers that plan well beforehand have better success on the road.

When catching trophy catfish are a goal, anglers sometimes travel long distances to fish. It may be for a tournament or it may be for recreation. Either way, it is a pursuit that Chambers of Commerce across the nation love. They welcome catfish anglers in their towns to sleep in their hotels, eat in their restaurants, and shop in their stores. And, because it can be a costly adventure it is important for anglers to plan ahead for a successful trip.

Phillip Brown is one of those anglers who love to hit the road in search of trophy cats both for fun and for competitive fishing. Sometimes he travels with his wife, Kristine Brown, and sometimes it’s with friends.

Kristine’s personal best (PB) 56-pound blue was caught on the road at Wheeler Lake in Alabama. Her 22-pound PB channel was caught during a Cabela’s King Kat tournament on Calamus Lake in Nebraska where Phillip and Kristine were fishing as a team and won second place.

Those PB’s for Kristine demonstrate what can happen when fishing on the road and explains exactly why Brown likes traveling for trophy cats. Regardless of who he travels with he takes preplanning very seriously. He calls it making a “plan of attack.”

The Plan of Attack

“Who you choose to travel with is probably the biggest decision of the trip,” offers Brown. “First off, you want to take someone with you that you get along with. Someone who makes you laugh and laughs with you is best. But, at the same time, you want people on the boat who know how to cut bait, cast rods, and net fish.”

After the choice of “who” has been made efficient communications before the trip will be beneficial. In this day and age, there are tools to help people stay in instant contact. Brown suggests starting a group text on Messenger. It is a perfect tool to keep in touch with everyone. It can be used to communicate dates, update the group on changes, develop an organized packing list, and assign who brings what.

Many important decisions will depend on which body of water is selected to visit and fish. For example, Brown started planning a trip in 2018 with three destinations in the running–Wheeler Lake, Gaston, and the mighty James River.

Brown tempted his fellow anglers with photos of fish he had caught at the various locations. He also let them know the mileage to each destination.

“I found some pictures of fish from all of the different bodies of water,” recalled Brown. “Everyone was good to go to any of them until they found out how long the drives were. So, this time it was hands down, across the board, the decision to go to Wheeler Lake in Alabama. The other two bodies of water were more than 16 hours away. So, 11.5 hours sounded like a walk in the park compared to the others.”

Once the location is selected other decisions must be made. Some of the important considerations include fishing license, lodging, time of the year and what to do about bait.

For starters, Brown reminds everyone that you need a state fishing license. He suggests beginning by looking ahead to how many times you might fish in Alabama (or any other location). Will you make a recreational trip in October and maybe fish Winter Blues in January? How about the SeaArk Tournament in the spring? If you answer yes to even a couple of these questions, the answer is easy. You need an annual license. Many catfish anglers have annual licenses for multiple states.

“Just make sure you don’t buy the guide for fishing instead of buying your Alabama license,” warned Brown. “When you go online to buy a fishing license it will take you to a guidebook. I’ve known several guys that thought they bought their fishing license but bought this how-to book instead. It is a little confusing so be careful and be sure to buy an actual fishing license.”

Fresh bait is always an important item for catfish anglers. When skipjack is a possible bait, crappie jigs from the local Bass Pro Shops and Foley Spoons are included on Brown’s list. He normally plans to catch bait on location if possible.

“You should figure out first what section of river or lake you plan on fishing,” said Brown. “Then choose your lodging as close as possible to the area you plan to fish. I have used Airbnb to find housing and there are cabins and lodges on the lake. If you have a tent, camper, or RV you can stay in one of the recreational areas available in the area. Heck, I have even been known to sleep on my SeaArk Big Easy.”

Once you know the general area you will be fishing, narrow it down to a manageable stretch of water. You can use things like Google Maps and other internet resources to help with this before you leave home.

“I use Google earth for pinpointing ramps, lodging, and food,” said Brown. “My Navionics app on my phone is used for finding holes or ledges. I also use the DistancePinner app to calculate distance so I know how much gas is needed.”

“The next step is to check your list a final time and get ready to hit the road,” said Brown. “Just plan on having a good time. It sometimes may seem like a lot to travel 10-plus hours away to find fish, especially if you plan on fishing a tournament. But if you planned well everything should go smoothly.”

“…important decisions will depend on which body of water is selected…”

Bait has to be obtained before the catfishing begins. This is the first opportunity to put some of the pre-planning to work.

“I always make up plenty of double rigs with 20-pound mono,” offered Brown. “I put the crappie jig on top with the spoon on the bottom. The main bait of choice on Wheeler is the skipjack (Tennessee tarpon). About 20 skipjack are needed per day, so 40 to 50 is a good starter to last a couple of days before you have to catch more.”

Anglers often worry about fishing new waters. They don’t have the same confidence that they have on their home waters.

“Yes, you are at a disadvantage in unfamiliar water compared to locals,” offered Brown. “But if you use a lot of the simple things, like choosing the right water to fish you can be successful. It’s a lot easier to pick apart two to five miles of water rather than 10 to 20 miles or even more.”

“Say there are 75 miles of water accessible from your ramp site,” explained Brown. “Instead of figuring out what the fish are doing on all 75 miles pick a section of water that has channel ledges, flats, and holes. Pick that section apart. But only fish it if you read fish.”

“The most important thing of all is to trust your electronics,” continued Brown. “These fish we are after will look like grains of rice on side imaging. If you keep scouting you will eventually see one of these big fish and target him until he moves or bites and your success rate will more than double.”

“Personally, I only give a spot 30 to 45 minutes,” declared Brown. “That goes for anchoring and drifting. If your drifting for 30 to 40 minutes with nothing or your catching small eater size fish then it’s time to move.”

Brown’s hometown is Carlisle, IA. He claims Redrock Lake as his home waters. Coincidentally, Brown, Josh Mayes, and Jason Burgus fished the Catfish Stalkers in early October on Redrock and took home the first-place prize. Even though he fishes his home waters with success he actually fishes more on the road.

“I probably only fish my home waters about 20% of the time,” revealed Brown. “I am more often on the road with someone to Alabama, Nebraska, Missouri, Kansas, or Canada fishing for trophy size blues or channel catfish.”

“The one thing I like best about traveling to other destinations is the possibility of beating my own personal best or someone else’s personal best,” stated Brown. “My overall goal is to be a well-rounded angler so I can compete anywhere in the United States.”

“Whenever I travel I always like to take someone new so they get to feel the tug of one of those big catfish,” concluded Brown. “And of course, the feeling I get when releasing them back is always fun too.”

The Wheeler Lake trip mentioned in the story was a great success. Two people broke PB records and plenty of big fish were caught. The heaviest fish were 59, 46, 42, and 36 pounds. A total weight of more than 1200 pounds came to the boat. This is exactly why Brown likes trippin’ for catfish.

Brown achieved his overall goal, which is getting his own PB or getting one for someone on the boat. Brown did not improve his own, but his uncle, Brian Foust, left home with a PB of 41 pounds and now it’s 59. Brown’s friend, Colton Buchanan, upgraded on the same trip from 12 pounds to 46 pounds. Phillip also had his cousin, Darren Alexander with him on the trip. Daren didn’t upgrade, but he did boat a nice 30 pounder.

Brown is a believer in doing what works. On this trip, the anglers drifted, anchored, and walked baits with most of their success coming while drifting.

Fortunately, skipjack was relatively easy to get and they put it to good use. They even competed in a tournament while there. The HOLD’em HOOK Catfish Trail was conducting a monthly tournament. The traveling team weighed in a three fish limit at 55 pounds to place 8th in the tournament to sweeten the success of traveling to catfish.

“Yes, we even got to compete a little which is nice,” offered Brown. “Especially with two people on the boat that had never been in a tournament before. They got to see how tournaments are ran and the excitement that goes into it.”