How to Fish the Missouri River in the Winter 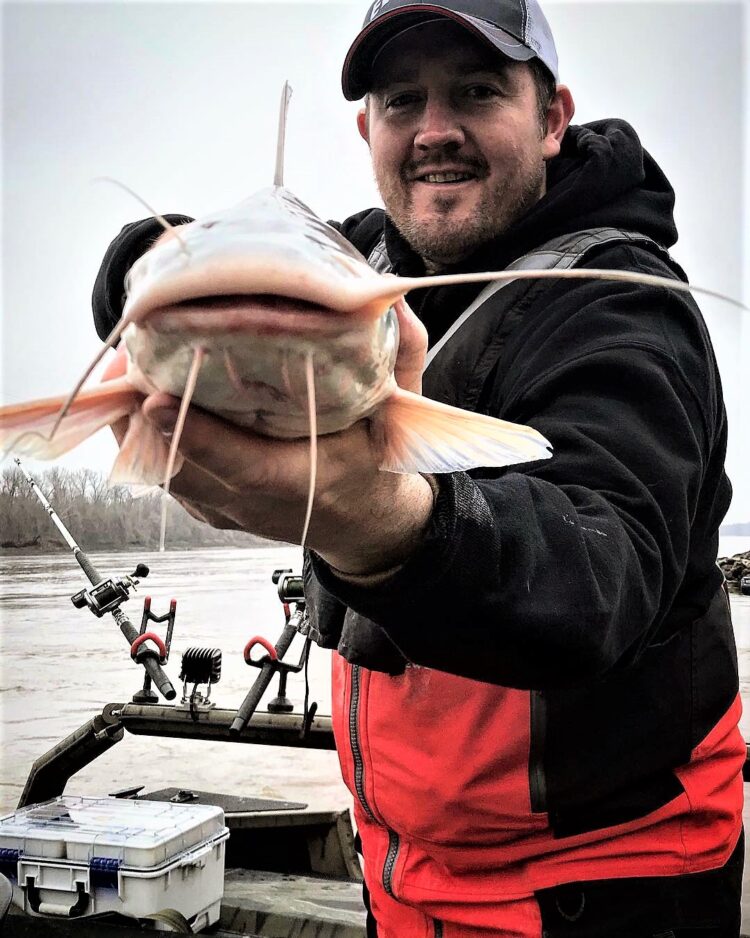 Editor’s Note: All of the other reindeer used to laugh and call him names. They never let poor Rudolph join in any reindeer games. Then one cold Missouri night two tournament directors did a live feed on Facebook and announced a catfish tournament that didn’t exclude anyone from playing the catfish game. Rudolph was delighted to hear the good news. He sent in his $50 to hold his place and started making plans to fish the Missouri River near Lexington, MO. Then all the reindeer loved him as they shouted out with glee, Rudolph the red-nosed reindeer, win this tournament and you’ll go down in history!

The idea for Catfish Games was angler driver. When a friend of Alex Nagy approached him about a winter tournament on the Missouri River it didn’t take him long to favor the idea. He gave the notion a little more thought and contacted Tim Berger and asked him if he would like to team up and do a tournament during what is traditionally a down time for tournament action. Tim was quick to come on board because he felt that, weather permitting, the winter is a great time to fish the area.

By coming together as co-directors, Nagy and Berger blended the characteristics of their individual trails into one with a single emphasis. They wanted to create some catfishing fun on the Missouri River in December. They wanted to bring anglers together from their own trails as well as anglers from all over the county.

The official announcement came in October 2019 via a Facebook live feed where Nagy and Berger described the basic idea and answered angler’s question. Before the feed was complete 17 anglers had already registered for the First Annual Catfish Games and at this writing, 31 have joined in to fish the First Annual Catfish Games tourney. More are expected on registration day.

In addition to the Saturday tournament, a Calcutta auction will be held on Friday night for registered anglers. It is not required to enter the Calcutta to fish the tournament.

Because of their own experience on the Missouri River in the winter, both directors expect some great fish to be caught. In fact, given the caliber of fishing at Lexington, there is a good chance for anglers to catch a personal best or maybe even a state record.

Berger has some advice for fishing the Missouri River during the winter. It relates to cold weather, safety, bait, and location.

“The first thing I would point out goes for any time of year,” advised Berger. “You need to be wearing your PFD. It is winter and you are wearing many layers of clothing. If you were to happen fall in the water wearing all that gear, you will need a PFD more than ever. Wear your safety gear, have extra clothing and let someone know exactly what part of the river you will be fishing in. Safety is always a concern, but things go wrong so much faster in the winter.”

“As far as fishing in the winter, I have had decent luck fishing deep holes with structure off of a good current seam,” suggested Berger. “I have also had pretty good luck fishing close, very close, to the shoreline in late fall/early winter.”

“As far as bait goes, I try to use fresh bait, but frozen bait can work just fine once you find some fish. I have used fresh Spanish Mackerel when I didn’t have time to go get bait and when I didn’t have any skips, but it has to be fresh. Mackerel is a very soft oily fish and it seems that once it is frozen it never really produces much.”

“So, my advice is to take some time and find a good spot, a little deeper than the rest of the river,” concluded Berger. “Look for something with some structure in it and right off the current seam. Use fresh bait as much as possible, but if not, use frozen skips and cut them to expose as much meat as possible. Keep moving your bait across that hole slowly until it crosses path with that big blue cat.”

“Winter fishing the Missouri River is something you must do if you love to catfish,” added Nagy. “December and January are my favorite months to get out on the Missouri River. As the sun rises, I target my first dike. I target deep scour holes where fish are laying. Then, as the sun warms the sand flats, I start to target shallow water where blues can often be found chasing sunbathing shad. Winter on the Missouri is a great time to catch a personal best.”

One of the first anglers to sign up and support the First Annual Catfish Games was Justin Thornton. He is a regular on the Missouri River, and like Nagy and Berger, expects some good fish to come during the tournament.

“The winter is my favorite time to fish on the Missouri River,” offered Thornton. “It’s the best time of year to catch numbers of fish and still have a good chance at catching a pig. The fish are grouped up, so when you find one, you’ll usually find several more.”

Thornton mentioned the All American Catfish Ice Breaker Tournament he fished previously. He teamed up with Duane Buckridge to fish the February event. It is a great example of winter fishing on the Missouri.

“We searched and searched for more than half the tournament with few results,” recalled Thornton. “We finally found a group of big fish 40 miles from weigh-in (near Lexington) and only had a few hours to fish. Before long one of the fish we marked decided to bite! Once I reeled down, I knew it was a big fish. While trying to turn the fish towards us, another one of my rods went down. Duane reeled down and said ‘this is another big fish!’”

The fish Thornton had on got wrapped up in timber and Buckridge’s fish managed to sneak out of the hook. They positioned the boat above Thornton’s fish and began trying to finagle him out. After 10-12 minutes Thornton chalked it up to tough luck and proceeded to grab the line with the intention of breaking it off and going back to fishing.

“I pulled hard,” said Thornton. “I managed to break the limb the fish was wrapped on so I was able to land the 59-pound fish. We pulled the boat back to exactly where we were before and got lines back in the water. Within five minutes, we have another rod go down! This fish came in at 51 pounds. You can imagine our excitement after luckily, landing the first big fish in the way we did and following it up with another good fish.”

They stayed in the same spot that had proven such great results. After 10-15 minutes another rod started peeling drag! It was one of those bites that you just know is another big fish before you even feel him. After a short fight, a 69-pound fish came to the net. That made their five fish for the weigh-in.

“After we got the final fish in the livewell we decided to head back in,” continued Thornton. “Although 40 miles isn’t that bad to travel, there was a 45-mph wind that we had to deal with on the ride back. We wanted to take it easy for the safety of our fish. We ended up winning the tournament with 183.5 pounds.”

“The Missouri River can be very humbling at times,” concluded Thornton. “Yet it can still provide the trip of a lifetime.”

The First Annual Catfish Games will be held out of Lexington Riverfront Park, Lexington, Missouri on December 8. 2018. The entry fee is $150 with $10 going to Big Fish. Pre-registration of $50 can be made on the All American Catfish Trail website at www.allamericancatfish.com. The fee is simply a placeholder. The balance of $100 is due at sign-in. There are no late fees.

The fishing times are 7:30 am to 3:30 pm CST with a five-fish weigh-in of blues, channels, or flatheads. Six rods may be in use at any time with unlimited rods in the boat. There are no stringers or hoop nets allowed and anglers must be off the water at midnight the night before.

Keep up to date on announcements and updates on the First Annual Catfish Games Facebook page.