Tournament Tales- Building My Own Tournament 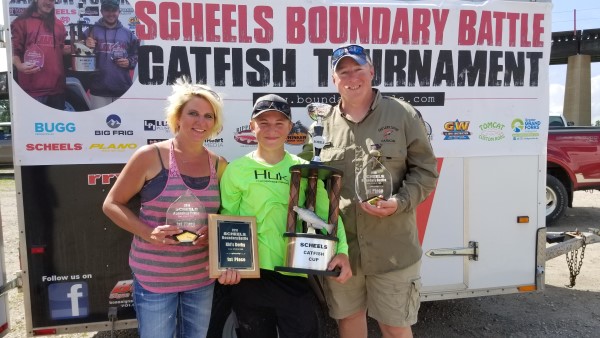 My catfish tournament, its unique format, and things that pop up.

Putting on a great catfish tournament is not as easy as many think. Just finding a date and throwing together a group of anglers is not a real tournament. A real tournament is a well thought out, well-oiled machine. To truly do it the right way takes months or even years to put together. The director has to put on a show and build a solid reputation as an event that everyone wants to be part of.

It all starts out with an idea followed by a plan. A good plan takes some time to implement. You have to deal with many entities to make sure all the T’s are crossed and I’s are dotted. You must deal with permitting, marketing and other obstacles that are thrown at you that have not been thought up yet.

As the tournament date nears you begin to worry about whether everything is in place and if the weather will be good or not. You hope the anglers like the rules and format that you chose. And you hope that they catch enough fish and have enough fun to want to come back for years to come.

When I was thinking back to my own experiences it occurred to me that I have had a lot of event planning involvement in various areas. When I was in high school and college, I directed a small powerlifting contest every December. In my career as a television executive, I was in charge of the annual bowling classic. I also sat on a committee with the Chamber of Commerce that ran a 150-boat catfish tournament as a fundraiser. These events were the basis and set the foundation for my tournament directing career.

I was approached in the fall of 2013 by the local visitor’s bureau to start a new catfish tournament. I initially said that I was not interested but over the next year of watching the dysfunction of other tournaments around the area agreed the next year (2015) we would start a new tournament. The stipulations for my directing the tournament were that I got to make the rules and that a polygraph test for the winners would be mandatory.

“…a polygraph test for the winners would be mandatory.”

The Boundary Battle is close to what I think is the perfect tournament format. After hours of discussion, it was decided to put the anglers first. We make the anglers fish two different sections of the river. We have the payouts and rules set up like no other tournament that I have ever seen. Instead of a standard payout, our money is broken up into categories. In other words, if you win lots of categories you win lots of money. In most tournaments, not everyone wins all categories so the money is split up amongst the anglers.

In most two-day tournaments, if you have a bad day one you are out of the running except for some random awards and door prize drawings. We have daily team winners, big fish winners, and slot fish winners. We also make the Hard Charger Award for the team with the most gain from day one to day two. What this means is if you have a terrible day one, there is $2,000 in new money on day two giving you a reason to fish and something to compete for.

It has happened that a lower placed team won more money than the actual tournament winners because they won more categories. The very first year, 2015, there was a team that was middle of the pack after day one. Day two they had a great day winning the day and catching big fish honors pulling them into fourth place for the event. As a result, they received a check for seven hundred dollars more than the actual winners.

The Boundary Battle has a slot limit due to North Dakota and Minnesota laws on our catfish. Only one catfish over 24 inches per angler which gives a two-man team  a limit of two fish over the slot per day. We also have a no culling law meaning that once you put a fish in the livewell it is considered kept. For tournament anglers, the decision to keep a fish for weigh-in must be made at the time of the catch. The decision becomes whether to throw the fish back immediately and keep fishing or commit the fish to the livewell to be weighed.

You may be asking yourself, how do they prevent cheating in a tournament with a slot limit and a no culling law? A long-standing tournament in our area had huge cheating problems even with on the water officials. It was never proven but is always assumed. Because of the no culling law, teams can get done fishing and weighed in early. This takes away from the long drawn out final weigh in. In fact, our final weigh in only lasts about 20 minutes.

To eliminate cheating from culling fish we instituted a mandatory polygraph test for one angler. The angler is chosen from a random drawing from the top five teams as well as each day’s winning team. We are also able to enforce the fishing boundaries, fishing hours, and prevent any fish modifications.

All of this has made for a fun, fair and challenging tournament. It has become a tournament where the main goal is getting your name on the Scheels Catfish Cup as much as cashing the check.

Any sort of event will have fires that pop up and must be dealt with on the spot. These can be anything from a slot fish that is over 24 inches meaning the heaviest fish is disqualified, to road closures, to runaway boats.

Two days before the 2018 Boundary Battle the main road to the day one boat ramp was closed. We had to find alternate routes and get a map and direction out to the anglers ASAP. We ended up with a detour going through a residential area to get to the boat ramp. We drew up a detour map and spread it through social media. I’m sure those homeowners were surprised to hear 50 trucks with boats drive by at 5:00 am on Saturday morning.

The biggest issue to pop up at one of my tournaments was not even related to the tournament. Mid-morning of day two a car pulling an old white boat came through the parking lot, launched, and a family took off. Hours later, one of the tournament anglers came up to the weigh station and told me there was a boat washed up on shore with no people in it. In the end, what happened was they threw an anchor on the bank to hold the boat while they went to eat pizza at a local establishment. The strong winds of the day broke a bad anchor rope sending the boat into the river. A good ending but a situation you never want to encounter especially during a tournament.

Directing a tournament is stressful but rewarding. We have developed a successful format that is unique and fun for the anglers. Things come up in any event and we just do the best we can to make it great.

Captain Brad Durick is a nationally recognized catfish guide on the Red River of the North, seminar speaker, and author of the books Cracking the Channel Catfish Code and Advanced Catfishing Made Easy. For more information go to www.redrivercatfish.com