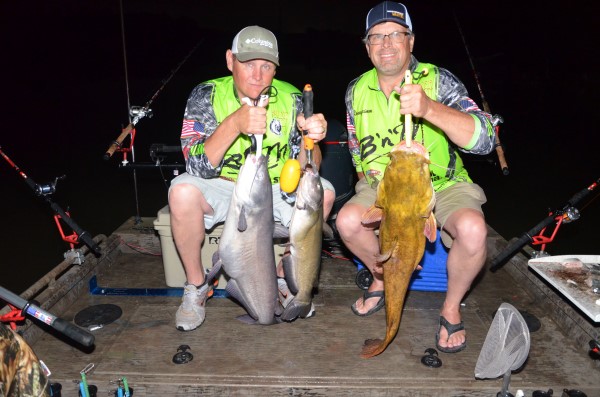 When the lights go out the big cats come out to prowl.

During warm months like July and August, many recreational boaters enjoy the waters in various craft, particularly on weekends. But as nighttime approaches the waters become calm and quiet. On this particular evening, although surrounded by a metropolitan area with more than 400,000 people, all remained eerily quiet. Only the light patter of rain drops smacking into the canvas top that covered our heads broke the silence as we anchored to fish near a fallen tree on the Alabama River.

“Even with the city right there, catfish don’t get much pressure on this river,” remarked Mike Haney, a professional catfish angler from Perkinston, Ms. “During the day, boating traffic affects fishing. Catfish tend to drop down to deeper water when motors keep going over them, especially the bigger outboards. At night, we can target big catfish practically anywhere we want to go and don’t need to compete with many other anglers.”

In the quiet darkness, catfish come out of their holes to more aggressively hunt for prey. With about 10,000 taste buds per square inch of its skin, a catfish swims through the water like a giant tongue tasting everything. Catfish sensors can detect minute food particles or scents from long distances even on the blackest nights in the muddiest waters.

“During a summer day, catfish go under cover or in deeper holes where the water is a little cooler,” Haney explained. “At night, fish are on the move and feeding. When they are on the prowl for baitfish and other things to eat, catfish move up shallow. Bait tends to stack up around sandbars and ledges close to deep water. During the night, instead of looking for deep holes, we look for places like a flat or a sandbar near a hole. We’ll fish the sandbar and the ledges around the deep water.”

Day or night, how to catch catfish remains essentially the same. Aggressive fish will find a tempting bait. However, to catch non-aggressive fish, anglers must put succulent baits right in front of their noses. In the darkness, anglers can move a little closer to prime cover without spooking fish, a good thing since they frequently need to get as close as possible at night.

“In the darkness, we try to get a little tighter to structure than during the daytime because we can’t see as well at night,” advised Rodney Crimm, a professional catfish angler from Ecru, Miss. “In the day, we can see the bait traveling through the air and stop it where we want it to land, but at night, we can’t see it as well. At night, we look for some woody structure or a steep drop-off. We want to catch fish coming up out of deep holes where they spent the day.”

Obviously, night fishermen need good lighting to see cover and do their rigging. In the old days, fishermen used hand-held flashlights or gasoline lanterns. However, lighting technology improved in recent years, making fishing after dark much easier. Many LED or “light-emitting diodes” give off excellent brightness in smaller packages with less heat than other forms of illumination. In addition, LED lights don’t seem to attract as many insects as other lights, a major plus when fishing on a hot summer evening. Anglers can also use LED or other headlamps to keep their hands free. Always use just enough light to perform functions and only as long as necessary.

Boaters could permanently install light fixtures in strategic places or set up temporary lights. Battery-powered LED strips come in many sizes and configurations for people to attach to their boats and equipment. Some lights come with magnets so anglers can stick them to any metallic surfaces. Other anglers put Velcro strips where they want to hang temporary lights. Anglers can also use plastic zip-ties to secure lights to boat parts or other gear.

“Anyone who plans to do a lot of fishing at night needs to get some good lights,” Crimm recommended. “Putting LED light strips along the back of the boat where the rod holders go gives anglers a big help. They don’t put off too much light, but enough that we can see bites on the rods.”

Some boats come equipped with plug-in running lights that people can stow out of the way when not needed during the day. For fishing off the boat stern, anglers could plug the white stern light into the socket where the red and green bow lights normally go when running the boat in the darkness. With the brighter stern light placed in such a way, it provides enough illumination to see to fish, but the bright light attracts bugs to the other end of the boat, leaving anglers less bothered. A note of caution, power lights with a separate battery or system rather than the engine starting battery or don’t keep lights shining all the time for too long.

Any rods or rigs that catch catfish during the daytime can catch cats at night. However, some night fishermen attach small bells to their rod tips. These bells jingle when a fish takes the bait. Others add small glowsticks to their rod tips to make them more visible or some combination of bells and glowsticks. Anglers can even buy entire rods that glow in the dark or some with glowing tips specially made for night fishing. In addition, some lines come in tints that become more visible at night so fishermen can spot nibbles easier.

“We fish at night pretty much the same as we do during the day, except when we get to where we want to fish at night, we set up two LED pods attached to T-bars to help us see,” Haney said. “We shine them off the back of the boat so we can see our rods and where we’re throwing. We use B’n’M Silver Cat Elite and Silver Cat Magnum catfish rods with Abu Garcia 6500C reels with 40-pound-test for the main line and 50-pound-test for the leader. We use 8/0 to 12/0 Flathead Fever circle hooks. With circle hooks, we just let the fish take the bait and start reeling it in.”

For bait, all the traditional daytime enticements work just as well after dark. Blue and channel catfish eat practically anything they can find—day or night, but some anglers prefer to use live fish at night because the creatures give off vibrations that predators can detect. Flatheads typically prefer live bait, but the voracious predators will also grab fresh fish strips or chunks. Also, flatheads generally become much more active in the evening when even the most popular public waters see the least activity.

“We usually fish from right before dark until an hour or two after dawn,” Crimm detailed. “As the water cools during the night, fish become more active. We’ve had times when we started fishing at 6 p.m. and didn’t catch a fish until midnight. Then, we didn’t catch another fish until 3 a.m. From 3 a.m. to dawn, we caught the most fish.”

At night, safety becomes even more paramount than during the day. When running the boat, wear a personal floatation device and use a kill switch. Don’t run too fast with limited visibility. However, with a few precautions, good lights and plentiful bug spray, anglers can often spend many enjoyable evenings fishing the best honey holes in more comfortable temperatures with little disturbance, except when big fish grab the baits.