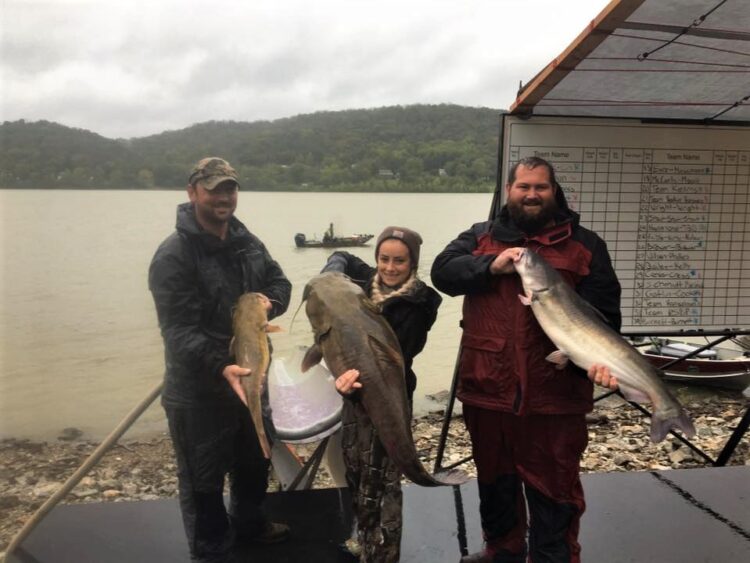 More than 14 years ago  Frank McIntosh had a wild idea that a big catfish tournament could happen in Rising Sun, Indiana. He reasoned, that If the money was right, people would come like they do for bass tourneys. So, Frank sat down with then Mayor, Bill Marksberry, and together they created the first ever Ohio Valley River Cats City of Rising Sun Tournament.

There were 57 teams that first year under McIntosh’s leadership. Over the years the Rising Sun tournament has grown to an average of 150 boats. The tournament has been popular through all those years because of a low $50 per person entry fee and payouts that were larger than most. Rising Sun is a good regional location between major cities and attracts anglers from all over.

McIntosh served as tournament director until last year when he passed the director duties over to Stephen Hannan, another Rising Sun resident.

“I want to remind everyone that this is my first year as tournament director,” offered Hanan. “There have been changes made and some things will be done differently. We are trying to keep everything as close to the past as possible, but with some things, we will have to improvise.”

“We have several people in new positions,” continued Hannan. “We have a new secretary as well. His name is Cody Miller and has been in the background behind the scenes with this tournament for years. So, I ask anglers to please be patient as we work out the kinks with the new administration.”

“I love the camaraderie of the tournament,” said participating angler and sponsor, Vince Nadosky. “I have fished it, I think 7 times, and enjoyed every year. The tournament is on the Ohio River and the town of Rising Sun totally supports it. They are the ones that guarantee the 10k first-place prize. I fully support the tournament and I want to see it grow.”

“The Rising Sun tournament has continued to be popular despite the area being hit hard by commercial fishing over the last decade,” explained Hannan. “The good news is that the fishing is making a comeback. I expect this year to be some of the best weights we’ve had in years.”

“Competitors come from all around to fish the Rising Sun Tournament,” said Hannan. “To name a few, Scott Cress and Don Elder come to mind historically having good finishes. Cress holds the two-day total weight record of 244 pounds. Cress and Elder are multiple time champions. Derrick Johnson along with his father always find a way to walk away with a check. Tom and Samantha Petrowski along with Henry Neafus have been consistent over the last few years and currently hold our big fish record with a 69.3-pound blue.”

Multiple methods have been successful at Rising Sun over the years. The best baits in September tends to be mooneye and skipjack. Live shad will get the job done if you are targeting flatheads.

“The most popular techniques over the last several years have been drifting deep water when the river has been in pool and suspending over muscles and structure,” instructed Hannan. “Several anglers anchor up below Markland Dam and have brought back good weights over the years. Dragging and planer boards are starting to gain popularity on this section on the Ohio River.”

“B’n’M pro-staffer Scott Cress plans to fish the 2019 tournament on what he calls his home waters. He has nothing but good things to say about what he described as, probably the longest-running “mega tournament” in the country.

“Folks can expect a well ran tournament hosted by a great town that comes out to show its support,” offered Cress. “Local veterans come out to play Taps in the morning followed by the National Anthem (sung by a local school girl) and then an opening prayer. It will send chills down your spine!”

“Since this is my home water I really don’t pre-fish much,” Cress said. “Based on conditions I usually know where I’m going to fish already. I spend most of my time leading up to the event stressing over bait. In years past I’ve driven over 6 hours one way to get what I need.”

“I give a lot of credit to the Ohio Valley River Cats club and all the volunteers,” praised Cress. “They put in the countless (and sometimes thankless) hours. They truly put on a first-class show. I think you’d struggle to ever find another catfish tournament that’s paid out more prize money relative to entry fees collected in the country. The format is unique in that the big fish jackpot is usually over $5,000 by itself. Coupled with the low entry fee that makes for a great turn-out.”

“I want to thank the city of Rising Sun, the Mayor’s Office, Main Street, and Ohio County Tourism for their continued support,” offered Hannan. “Also thank you to Knot Marine, Chubby Fish Outdoors, Shattered Cat Rods,  After Warranty Trolling Motor Service, and Catfish Tech for their new support and sponsorships that have allowed us to add new prize categories.”

One of those new categories is a Youth Division. As of this writing, several youth anglers were registered to fish the tournament.

“Someone’s child or grandchild is going to walk away with $500 from Chubby Fish Outdoors,” reported Hannan. “A child is going to be crowned champion. Why not your child? This is a great opportunity and added incentive to get our youth anglers on the boats with us and introduce them to tournament fishing.”

“Finally, the biggest thanks of all is for my wife Amber Hannan,” concluded Hannan. “She is the real tournament director of this event. She’s handled everything for me with registrations, answering questions, and anything else that has needed to be done to make this tournament possible while I am away with my job. She’s been my rock through this transition.”