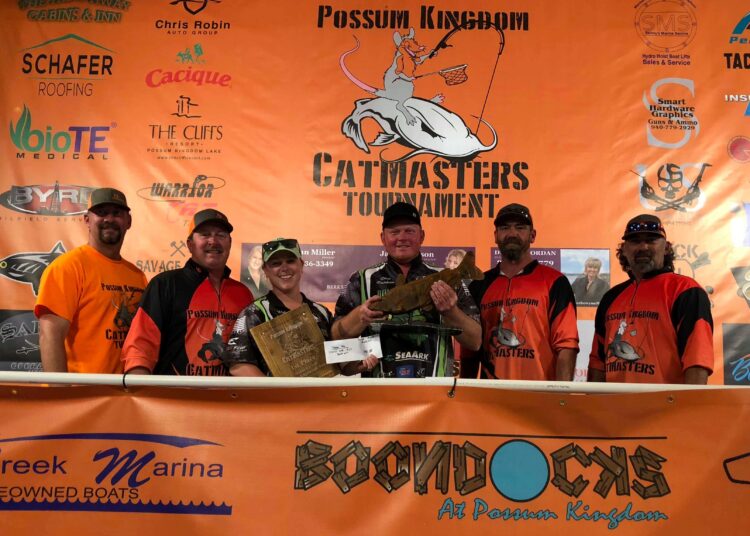 In only its third year, the Possum Kingdom Catmasters (PKC) Catfish Tournament is the highest paying catfish event in the nation. This year’s event was capped at 200 entries and has been sold out for months.

Catfish teams from all over the nation are traveling to Possum Kingdom Lake to participate in the two-day tournament. Given the three-person teams allowed, the total of registered anglers is 560.

The 2019 tournament begins Thursday, October 17. The first-place team will earn $30,000 for their efforts. At least one member of each team must attend the 5:00 pm Captains’ Meeting at the Possum Kingdom Lake Chamber of Commerce. The Chamber of Commerce location will also serve as the weigh-in site. Competitors must check in each day at the weigh-in site by 4:00 or be disqualified.

The 2018 event attracted 129 teams from as far away as California and Montana. Catfish anglers were competing for the first-place prize of $25,000 and other prizes. More than $60,000 in cash and prizes was awarded. Last year the two-day tournament recorded a total weight of 2,756.1 pounds of catfish. With 70 more teams entered this year, that weight is very likely to increase.

The tournament also offers a Calcutta for both stripers and gar and a public raffle for an additional chance to win prizes. The organizers are highly focused on providing fun for everyone attending. The public is invited and welcome to attend the weigh-in.

Public events for kids include a fishing derby, casting contest, and other activities. Everyone attending will receive one free raffle ticket and may buy more if they want to increase their odds of winning a new SeaArk boat, trailer and engine, one of two kayaks, or several guided fishing trips.

Last year’s winners, Chris and Kyli Baldwin, made the relatively short drive from Oklahoma to defend their title. Last year they weighed 145.88 pounds to take top honors. Chris said they set a strategy and stuck with it. They found good fish while pre-fishing and followed them as they moved.

With their title on the line, Chris and Kyli arrived early to prepare and put in some pre-fishing.

“We have been here since Friday,” reported Kyli. “This is definitely a tough year. We are just trying to concentrate on what we know and hopefully get some fish in the boat.”

Eddie, Ann and Spencer White traveled much further to compete at PKC both last year and this. Last year they were greeted with cold rainy weather. This year looks much better with a forecast favoring good fishing weather.

The White family made the drive from their home in Montana to compete again in 2019. Like many catfish anglers, the challenge of fishing new waters is a large part of the attraction and pre-fishing helps make a plan.

“So far the pre-fishing has been tough,” Eddie said. “But compared to last year, the weather is nice. It’s chilly in the morning, warm to hot in the afternoon. It’s been sunny and beautiful.”

“Possum Kingdom is hands down the hardest place I have ever fished,” added Eddie. “We are hoping that we can finish practice fishing with a game plan that we feel confident with.”

Multiply the White family’s experience by 200 and that is what the PKC has brought to the catfish community. In addition to the many volunteers and spectators, the tournament is bringing 200 catfish tournament teams to Texas to develop a game plan, demonstrate their skills, and take a shot at winning the highest paying catfish tournament in the country.

The next Catmasters sponsored tournament will be held on Lake Texoma Jan 24-25, 2020. See the website at https://thecatmasters.com/texoma-rules/ for details. First Place is currently set at $25,000.