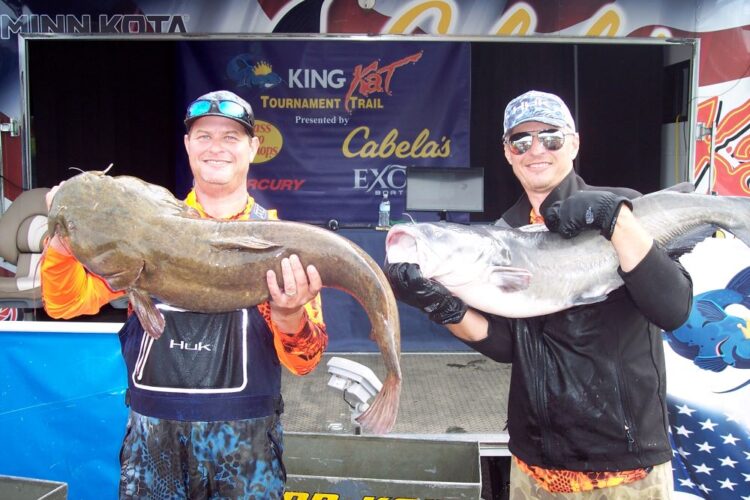 Will and Russell Sylvester claim victory at Huntington, WV.

Catfish anglers from seven states traveled to Huntington, WV and the Ohio River for a King Kat Tournament Trail event presented by Bass Pro Shops Cabela’s. Thirty-four teams gathered at Huntington to test their catfishing skills against other anglers and Mother Nature.

The King Kat tournament trail completed the regular season at Huntington, WV. The next event is the two-day championship event at Decatur, AL. Competitors were vying for $8,555 in cash and prizes, and an opportunity to qualify for the $120,000 Classic Championship to be held November 1 and 2, 2019, on the Tennessee River (Wheeler Lake) at Decatur, Alabama.

Pre-fishing produced some good fish and anglers approached the final regular event of the season with optimism. Some anglers said the current was slower on tournament day making for a tougher bite but lots of good fish came to the scales. The day began with dense fog making it difficult for anglers to navigate to their spots. The fog lifted after 10:30 when slightly overcast skies prevailed.

“The weather started off in high 30’s,” reported tournament director, Jeremy Coe. “It barely made it to the high 60’s in the afternoon. But heavy fog in the morning, light current, light wind, and overcast skies made it—Puuurrrfect!”

Results for the Top Catfish Teams

Team Sylvester ran through the early morning fog in their Excel Bay Pro 220 to fish near the Robert C Byrd Lock and Dam.

“The morning fog changed our game plan,” reported Will. “Visibility seemed like zero. We decided to lock spot near the dam. The bite was good and we landed 7 fish before 9:30 am.”

Once the fog cleared the bite slowed but they had some nice fish already. They decided to stay at the same spot for the remainder of the day.

“We found fish in 20 feet water,” Will said. “They were near the channel break and on the ledges. We were using Santee rigs under planner boards. We had just enough current to push the boards out and spread the bait away from the boat. All the fish were caught off planner boards.”

Team Sylvester used bigger hunks of skipjack to land 7 fish on the day.

It was about as close as it could be for second place. The runner up spot went to Jeff Corley and Brandon Kopis from Lancaster, OH. They brought 97.66 pounds, all flatheads, to the scales to earn $1,800. They were out of the lead by barely a pound.

“We started up near the Robert C Byrd Lock and Dam,” reported Corley. “We were anchored up fishing rock ledges in 20 to 25 feet of water. Right off the get-go, we caught 5 or 6 nice flatheads.”

The OH team fished around in the same area until about 10:30 am and caught a couple more nice flatheads. As was the case with the Sylvester team, the fog lifted and the bite slowed after about 10:30 so they moved downriver.

“We ended up catching a total of 12 fish,” concluded Corley. “They were all flatheads except for one blue cat. All the weighed fish were flatheads around 35 inches long. I am not sure about individual weight. We caught the fish on cut shad, live shad, and skipjack. Most of our fish came suspended off the bottom.”

The third spot went to the Belle, WV team of Preston Teter and Boyd Meadows. They weighed in 78.96 pounds to earn a check for $1,300.

Teter and Meadows fished upriver. They found their fish on the edge of the river ledge. They were fishing off the rope on structure to land 9 fish on the day. In a slightly different scenario, they caught all their fish after the fog lifted later in the morning. They also used shad and skipjack for bait.

Coming in fourth was Chris Rhodes from Scott Depot, WV and Chris Hatfield from Hurricane, WV. They teamed up to bring 78.16 pounds to the scale to claim their place and earn a check for $700.

Rhodes and Hatfield fished upriver as well. They were right at the Robert C Byrd Lock and Dam. They reported a much tougher bite on Saturday than what they had experienced pre-fishing on Friday. They reported less current on tournament day.

They moved downriver, also catching a majority of their fish after 10. The team anchored in 19-30 feet of water using skipjack and mooneye for bait. They landed 8 fish for the day.

Rounding out the top five was the Chesapeake, WV team of Frank White and Izak Petry. They teamed up to bring 76.98 pounds to the scales and earn the fifth-place payout of $475.

White and Petry fished upriver from Huntington catching their big fish later in the day. They were targeting fish on structure along the river ledge. They used skipjack in 20 feet of water to catch 6 fish on the day.

Big Kat honors at Huntington went to the team of Mike Mitchell, Jackson Mitchell, and Rick Sexton. They brought a big Ohio River flathead weighing 40.70 pounds to the scales to earn bragging rights and the Big Kat pot. They also claimed the tenth spot on the leader board.

“The big flat was caught in 25 feet of water in an underwater tree,” reported Mike. “We were fishing upriver from Huntington close to the ramp we used due to the heavy fog. The flathead hit 10 minutes into our first spot, around 6:40 in the morning. We caught 4 of our 6 fish before 9:00. We were using cut skipjack for bait.”

“We were using the new Slime Line Heavy Cover leader and medium-heavy Big Cat Fever rods,” concluded Mike. “That equipment really helped winch that flathead out of the trees.”

“It was a great end to the regular season with some great fish off a great fishery,” Coe said. “Now it’s time for the Classic where one lucky team will win a brand new fully loaded, $60,000-plus, Excel StormCat 230.”