Possum Kingdom Catmasters 2019 – How They Fished 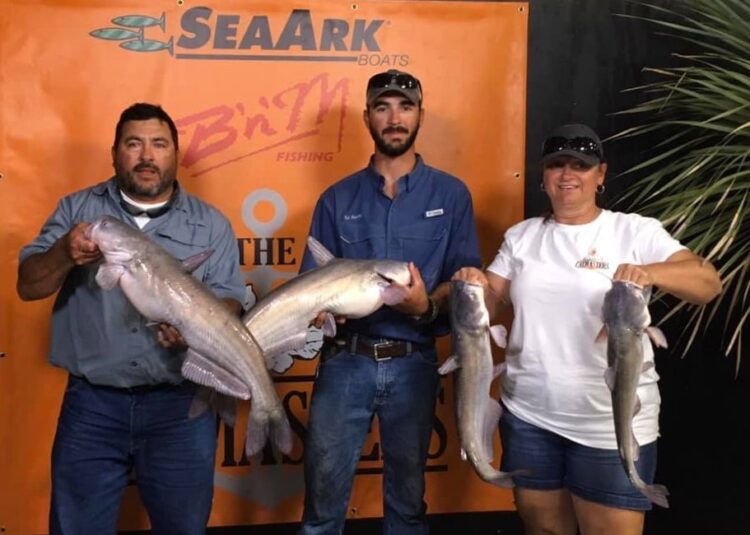 In only its third year, the Possum Kingdom Catmasters (PKC) Catfish Tournament is the highest paying catfish event in the nation. This year’s event was capped at 200 entries and sold out seven months before the tournament.

Catfish teams from all over the nation traveled to Possum Kingdom Lake to participate in the two-day tournament. Given the three-person teams allowed, the total of registered anglers was 560.

The tournament featured three days of prefishing and awarded a cash prize of $1,500 for Big Fish on each day. Optimism and excitement grew on day two of prefishing when Missouri anglers Rudy Chumette and Travis Robinson earned the daily prize when they caught a new lake record flathead weighing 42.10 pounds.

Despite the prefishing success, fishing on both tournament days proved to be tough. The weigh-in site at the Possum Kingdom Lake Chamber of Commerce had 115 teams weighed in, many with the max 5 fish limit, however, total weights recorded were fairly low for most anglers. Collectively the tournament weighed in a total of 1,859.49 pounds of Possum Kingdom catfish.

Despite the less than ideal fish bite, major sponsors like Bio Tec Medical, Sea Ark Boats, B’n’M Fishing, Suzuki Marine and others made $20,000 worth of prizes available. Not many anglers went home empty-handed. Including the Calcutta pots, $98,000 in cash was awarded to the anglers.

Spectator attendance was the largest yet. All spectators were eligible to win a 1648 Sea Ark boat Marine Master trailer, and a 15 horsepower Suzuki engine. The lucky winner was Joyce Muse who had traveled from Corinth, MS to support her husband/angler Larry Muse.

The organizers were highly focused on providing fun for everyone attending, not just the anglers. Public events for kids include a fishing derby, casting contest, and other activities. Everyone attending received one free raffle ticket and could buy more if they want to increase their odds of winning a new SeaArk boat, trailer and engine, one of two kayaks, or several guided fishing trips from all over the country.

Tournament days both proved to be tough fishing. Possum Kingdom is known for feast or famine catfishing and can change from one day to the other pretty quickly. Success required anglers to be extremely patient and wait for the bites. Anglers reported sometimes waiting for an hour or more for a bite.

First Place
The family team of TJ, Diane, and Ronnie Ranft of Graford, TX, weighed in a two-day total of 96.58 pounds to earn the $30000 first-place prize.

“I have lived at PK my whole life and can’t imagine living anywhere else,” said TJ. “I work here on the lake and run a striper guide service on the weekends (ranftguideservice.com). It’s really exciting to have a tournament of this magnitude here on our lake.”

“While we don’t often target catfish, my mom, dad, and I wanted to give it a shot. We really didn’t get to pre-fish at all this week. So, we started out Friday with a shot in the dark. We fished the north end of the lake in several different spots that we thought might be good.”

“Honestly, our strategy was just patience and perseverance,” continued TJ. “The weather on Friday was perfect and the fish really cooperated. We were able to get 5 fish in the boat fairly early and then cull the rest of the day. With one day to go, we were cautiously excited, knowing that it was still anyone’s tournament.

Saturday brought strong northwesterly winds that cause Team Ranft to make many location changes. They stuck with the north end of the lake but moved several times trying to get a bite. They generally stayed anchored when they stopped, but spent a lot of time looking, never any deeper than 25 feet. Unlike Friday when the bite was early, Saturday’s bite did not come until after noon.

“We just stayed patient,” said TJ. “We put our 5th and final fish in the boat at 2:56 pm, 4 minutes before lines had to be out of the water. We were just glad to have 5 fish in the boat as we persevered through the wind right up to the end.”

“We would like to thank PK Catmasters for putting on such a great tournament,” concluded TJ. “Thanks also to our friends at Possum Kingdom Tackle Co. for keeping us well supplied with tackle and Catfish Addiction for their amazing Chiller Bait Tanks that kept both our bait and trophy catfish alive throughout the tournament.”

The runner up spot went to David Studebaker and Andrew Malendy of Kansas. They weighed in a two-day total of 84.84 pounds that included overall Big Fish. They made an incredible comeback after weighing in 11 pounds on day one they brought 73 pounds to the scales on day two to earn $14,000 for second place. When all their bonuses were added in the Kansas team earned a total of $20,300! And all this on a lake neither angler had seen before.

“We found bait to be easy to catch (gizzard shad),” reported Studebaker. “This got us excited as sometimes the bait is the hardest part. This is probably the most challenging lake I have ever fished. There is underwater structure for miles that makes it extremely difficult to even present baits to where the catfish live.”

By tourney day the team from Kansas was frustrated. They fished day one with light winds and mild temps and productivity similar to prefishing. They got some encouragement when they caught a 5-pound fish in the last 20 minutes of fishing time.

“We decided to go back to that area on day two and make camp,” continued Studebaker. “The morning was mild with a 10-20 mph wind through the day, eventually switching from the south to the north. We anchored up in 65 feet of water and fished with cut shad. The very first bite resulted in a 22.96-pound blue cat. Within an hour we had 2 more bites resulting in an 18- and 17-pound blue. In the next hour, we caught 2 more 8- to 10-pound blue cats. We tried to upgrade throughout the rest of the day but we had our tourney fish already caught.”

“As you could expect we are beside ourselves with excitement,” concluded Studebaker. In addition to catching fish, we saw several different forms of wildlife not seen in Kansas. Auodads (looked like mountain goats), Feral pigs, and Axis deer all came down for a drink of water while we were anchored up fishing. That was a pleasant surprise for us. It was a great feeling to FINALLY catch fish. Especially on the day that really mattered for the event.”

Studebaker and Malendy had a very important message, and for good reason, for tournament anglers. “Don’t ever give up!”

Third place went to last year’s champs, Chris and Kyli Baldwin of Oklahoma. They finished with a two-day weight of 80.81 pounds to earn the third-place prize of $10,000. They were also the top Sea Ark boat adding an additional $1,500.

“We pre-fished hard catching scattered fish throughout the lake,” reported Chris. “We noticed a lot of fish were suspended and there was one area where we caught more fish than in others. We didn’t want to beat them up prefishing so we left them be.”

Chris and Kyli were nowhere near where they won last year. That spot was covered with 10 boats so they decided to fish on the spot they found prefishing. Their strategy was to catch 25 pounds of fish quickly and move on. They caught 20 fish in the first hour. With their 25 pounds in the livewell, they decided to bounce around and pick up one good fish here and there. On their first spot, they added two 12’s and a couple of 7’s.

“We moved down the ledge 100 more yards,” explained Chris. “We hooked into several big fish that had other plans but still got another 12-pounder. In the meantime, we had another boat watching us. We spoke at the ramp and were informed we would have company on day two. I said to them I didn’t blame them.”

“We had plans of hitting the same ledge but didn’t want to be crowded,” continued Chris. “So, we went to spot B and the other boat went to spot A. We lost a big fish early on and only had 4 pounds in the livewell two hours in so we went on the hunt.”

“At 2 p.m. we decided to go back to where we thought the fish would show back up,” Chris said. “A pontoon boat pulled up and asked if we were the ones that ran out of gas. We responded no. Then his face lit up and he said you got a fish on that rod. We turned around and sure enough, the rod was buried. Then two more rods buried followed by a 4th. After culling we had 29 pounds in the livewell to seal the deal on 3rd place with only 10 minutes left.”

“The boat that watched us catch our fish the day before was still on spot A,” continued Chris. “ They hadn’t moved all day. At that point, we knew we may have picked the wrong spot to start on. That team ended up catching a huge stringer that landed them in 2nd place with big fish of the day and overall big fish. We are truly happy that one of our good friends was on the other boat and that they got a piece of the pie also. We had no expectations of that spot producing that big of a stringer so we let them have it and they snuck by us.”

Final Thoughts
“It is not typical to catch monster size catfish at PK,” said co-tournament director Bryan St Ama. But PK offered a possible trifecta catch of channel, flathead, and blue catfish. This trifecta and the $30,000 first place cash prize is what drew more than 500 anglers from all over the nation to compete.”

“Possum Kingdom Catmasters tournament is over,” concluded Ama. “But with only three short months to go the Catmasters staff is working hard to make their Texoma $40,000 first place tournament a success. There are already 174 preregistered boats.”

The next Catmasters sponsored tournament will be held on Lake Texoma Jan 24-25, 2020. See the website at https://thecatmasters.com/texoma-rules/ for details. First place is currently set at $40,000.