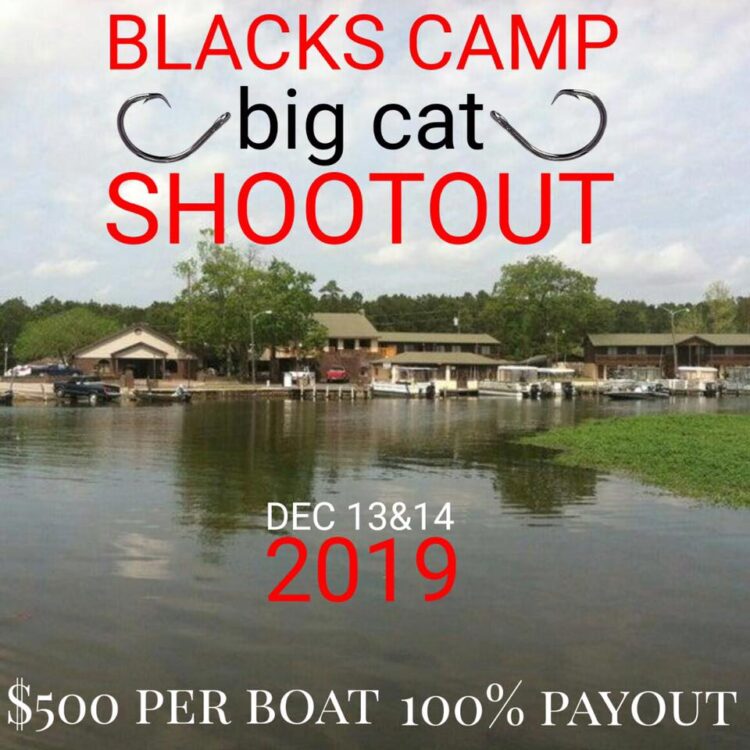 The December 13th and 14th 2019 Black’s Camp Big Cat Shootout features a two catfish per boat weigh-in. South Carolina rules allow one blue cat over 36 inches per day, per person, so both catfish can be over 36 inches each day. ­

Davis describes the Shootout as a high stake, 100% payout, catfish tournament. He is fond of making the statement, “Big entry fees equal big payouts.” And, that is exactly what he wants this tournament to be.

The 2018 winners, Timothy London and Wayne Church claimed the top spot in the Shootout with an even 85 pounds on day one that included a 46.40 pounder. They added 54.1 on day two for a 139.1-pound total. That calculates to about a 35-pound average weight on four fish.

Anglers will be allowed to fish Santee Cooper waters from the Pinopolis Lock, up to the Rimini Railroad Trestle. Those waters are a perfect location for a major tournament and Black’s Camp Big Cat Shootout 2019 promises to be just that.

Kevin Davis, owner/operator of Black’s Camp, was inspired by the first Santee Cooper Monster Cat Quest put on by Chris and Mandy Gains, and Jimmy and Layla Dylyska Holbrook.

The Monster Cat Quest was an example of great organization and planning on the part of the tournament directors and unbounded enthusiasm displayed by the anglers. As Davis observed the operation of that tournament, he started forming his own Big Cat competition in his mind.

“The Santee Cooper Monster Cat Quest held at Blacks Camp in 2017 really inspired me,” wrote Davis in a Facebook post. “(It was) …the efforts of the people who put the tournament on, the sponsors that came aboard, and especially the fishermen. Never before have I seen a group of catfish tournament anglers so professional and organized. All fish were released unharmed and everyone carried themselves as professional fishermen should.”

The third annual Black’s Camp Big Cat Shootout is scheduled around the new moon which occurs on December 12th. Davis is expecting some giant catfish to be weighed in on both Friday and Saturday.

The mandatory captain’s meeting is Thursday night at 6:00 pm. Only the boat captain is required to attend this meeting. Registration will begin at 4:00 pm on Thursday afternoon.

Fishing begins each day at 7:00 am. Anglers can be on their spot and ready to fish. Tournament rules indicate that boats do not have to launch from the weigh-in site at Black’s Camp. But boats DO have to be present at the weigh-ins. All teams must be in the weigh-in lines at 4:00 on both days. The public is invited and welcome to attend.

Lots of media is likely and photos and videos will be taken for stories and social media presentations. Davis asks that anglers be professional and presentable at the weigh-in. A professional “look” is important to the reputation and growth of the sport.

LODGING – Lodging is available at many places around the lake including Blacks Camp, Hills Landing, Canal Lakes, and Harry’s. More lodging opportunities can be found by visiting www.santeecoopercountry.org.

A COPY OF THE RULES may be found on the Shootout Facebook page. If you have any questions about the rules contact Kevin Davis at 843-312-3080.

Epilogue: The Shootout Warm Up

It has been promoted as some friendly tournament fun. The entry is $100 per boat with a $50 optional big fish pot. It features a 100% payout.

“I’m watching the water level leading up to the tournament,” reported Richard Chapman. “I want to caution everyone to be extra watchful for stumps.”