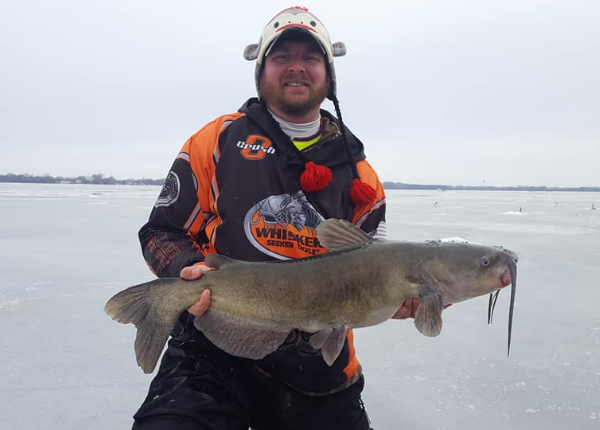 We hear lots of talk about taking care of our catch when the temperatures are hot. Summer heat makes it more difficult to keep the water cool and the oxygen levels adequate. But what about catfish under the ice. Hard water anglers have to use common sense and good fish handling procedures too in order to take care of the fish coming from under the ice.

“The cats seem to school up in the same areas every year,” reported seasoned ice angler Troy Hansen. “When you find fish in big schools you can catch a bunch in a short amount of time. If you keep everything you catch, a population can be depleted pretty fast.”

The good fishing that results when the schools are found leaves anglers with the obligation of returning some of the catch safely back to the water in good health. Hansen recommends 4 things responsible anglers can do to ensure a good wintertime release. His goal is to have fun, but in a way that respects and protects the fish to be caught again another day.

Hansen uses a homemade Auto-fisherman setup. His device holds a Whisker Seeker Tackle Ice Rod and automatically sets the hook when a fish strikes. The concept is to set the hook before the fish can swallow it.

“The Whisker Seeker Ice Rod is the only rod specifically designed for ice catting,” instructed Hansen. “They work in the original Auto-fisherman and the Jaw Jacker brand along with my homemade jobs. You drop your bait down, bend the rod around and hook it on the trigger then put the line on the end of the trigger. When the fish pulls on the line it releases the rod which snaps up setting the hook.”

“I have equipped mine with window alarms,” explained Hansen. “So, when the rod goes down the alarm goes off. That way I can get to my rod before the cats have a chance to pull them in.

In Iowa where Hansen fishes most of the time, anglers can use up to 3 rods. Hansen and a lot of his compadres like to set out a couple of auto-fisherman and then hole hop with a third rod. It can be a bit like a Chinese fire drill when several rods go off at once and everyone starts running to the triggered rods.

“This method of hole hopping can be very productive,” Hansen said. “In addition to my two auto-fishermen, I will drill up to 50 or more additional holes in an area. The goal is to find the schools of fish and stay on them.

The hole hopping rod is fished in a slow jigging manner. Since you are usually holding it you feel the bite and don’t really have to worry about the catfish swallowing the hook.”

Some anglers use a different ice fishing device called tip-ups. Hansen does not recommend them when fishing for cats. They are effective tools but are more likely to have a fish swallow the hook. Tip-ups are basically an open spool rig. When the fish swims off with the bait, the spool spins and sets off a flag to indicate a bite. The fish ​isn’t hooked, but free-swimming with the bait and hook until you get there. The longer it takes the angler to get to the ​tip-up the better the chance that the fish will swallow the hook.

When going after trophy cats through the ice Hansen suggests at least an 8-inch hole. In reality, a 10- or 12-inch auger is best. This is important for two reasons.

“First, if you use a smaller hole it is hard to get the fish to come up through the hole,” explained Hansen. “If the ice is thick you might not be able to get your hand or arm down the hole to grab them.”

“Second, when putting them back they will put their pectoral fins out and kind of lock them,” added Hansen. “They tend to do the same if you reach down the hole and try to drag them out instead of letting them swim up the hole by themselves.”

Hansen also recommends a good pair of needle nose pliers when ice catting. This simple tool gives anglers a way to grab the small J-hook or treble hook without getting their hands and fingers wet and slimy. ​

“The needle nose pliers are nice because when it is freezing cold out your fingers don’t tend to work as well,” stated Hansen. “Also, those big cats have a tendency to chomp down on cold fingers when you stick them in their mouth. It is just easier and less painful to use the pliers.”

“You can also use some of the other hook removing devices that are out there,” continued Hansen. “A lot of ice anglers use forceps that they can just clip to their coat for easy storage and accessibility.”

Different anglers prefer different tools for the de-hooking procedure. Regardless of which one you choose, they are necessary for Hansen’s next, and maybe most important tip.

Return the fish as quickly after catching as possible.

The colder it is the quicker you want to get the cats back in the water. Part of the problem is the same as any time of the year. It’s just not a good idea to deprive the fish of oxygen for any lengthy period of time. Additionally, in frigid weather, their eyes, whiskers, and skin freeze very quickly.

“It is best to try and keep them off the ice,” warns Hansen. “Ice can be very abrasive to their skin especially when the slushy ice from the hole freezes. The ice can cut or scratch catfish skin pretty easily. You also run the chance of the cat’s skin freezing to the ice on really cold days.”

“If we catch a fish on a really cold day, we may want a photo,” offered Hansen. “You usually know if it’s a good one while you’re fighting the fish, so get prepared. Someone should have the camera out and be instructed on how to use it. As soon as the fish comes through the hole, pop the hook, snap a pic, and get them back in the water.”

Keep only what you need.

There is nothing wrong with keeping some fish for the table. In fact, Hansen indicated that the cold-water cats are very tasty. He warns, however, that anglers should be careful not to over-harvest an area.

“The cats tend to school up in big numbers under the ice,” said Hansen. “When you get on them you can catch a bunch in a short period of time. We have had 40-plus fish days in the past. If you start keeping fish and catching them really fast it is easy to get carried away and keep more then you are going to eat.”

informed Hansen. “I have had some hot holes where I would drop the bait down and before it got to the bottom, I would have a fish on!”

“Sometimes a hole can be very productive,” continued the Iowa angler. “I’ve caught 10 or more fish out of one hole. As fast as I could get my bait down there, I would have a fish. Since they seem to congregate in the same places year after year it is imperative to practice selective harvest. If you do, the area should have great ice fishing for years to come. I have witnessed a few spots that have been fished out and now it is hard to catch anything in that area. It can happen!”

Catfish conservation is a serious issue any season of the year. As anglers, we all have to do our part to ensure a healthy population of big cats for the future and that includes wintertime too.

Hansen likes to remind anglers that conservation is up to us, but so is having fun when we catfish.

“Ice cattin’ is relatively new,” reminded Hansen. “As a sub sport it’s challenging and there are many ways to catch them. You will strike out a few times, heck I still do. But once you find a few productive spots it can be a great time!”

To make it more fun try going with a group of people so you can cover more ice and help each other dial them in. Hansen enjoys the group expeditions for two main reasons.

“With a group of people, you can set out a bigger spread of the auto-fisherman to help locate active fish,” said Hansen. “This can cut down on time spent drilling holes especially when fishing new waters.”

“The other reason I like ice cattin’ with a group of people is for the comradery,” concluded Hansen. “The first time I ever went ice fishing for cats I did it with a bunch of friends. We fished, told fishing tales, cooked food out on the ice, and just had a good relaxing time. So, to this day if I’m going to go ice cattin’, I always try and get a group together. Sharing a fishing experience with others is always more fun!”