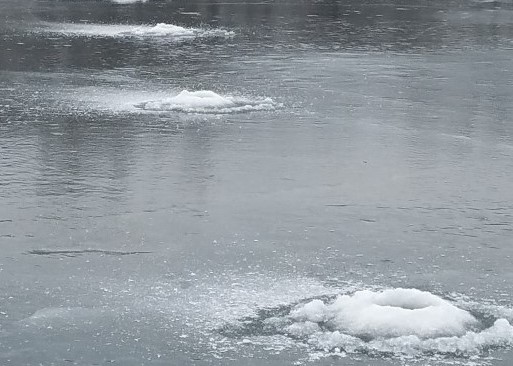 How to catch catfish after everyone has called it a season.

Winter sends a lot of thoughts floating through my mind, like setting my alarm ten minutes earlier to scrap my windshield; slipping and falling on sidewalks; going to bed at 8 pm because it’s been dark for 3 hours.

For more and more people winter means ice fishing. Add to that list of people, those who want to catch a big fish through the ice. In the lower ice belt, that usually means catfish. Few do it better than Troy Hansen and Ken Miller.

Hansen and Miller are characters. They like to have fun on the ice. A plethora of hats come into play, most notably the monkey stocking cap that seems popular with kindergartners. Apparently, it’s a lucky hat so it gits worn often. From a bystander’s point of view, a day on the ice with this pair looks more like a party than it does a hardcore catfishing trip. However, if you keep prodding, you will find out their system is extremely thoughtful, refined, and effective. It all starts with finding the fish.

Where to Find Them

According to Miller, location is based on depth. The particular depth you fish is relative. Catfish tend to concentrate in the deepest part of the body of water you’re on. This is all within reason though. Even in some bodies of water that dip down to 100 feet or more, the deepest they tend to fish is around 35 feet.

Bottom contours, particularly underwater humps, can be points of interest as well. After that, you have to experiment. Some days they are shallower, some days deeper. Spread out your lines and vary your depths until you find the honey hole.

Safety is the number one thing on the ice. A spud bar allows you to check the ice before you walk on it. Give the ice three hard strikes and if it doesn’t go through, it is safe to walk on. I compare this to looking both ways before you cross the street. I mean, you wouldn’t walk out on a highway with your eyes closed and you don’t walk out on the ice without checking.

Wearing a floating ice suit, or having a life vest under your jacket is a good way to calm your mind if ice makes you nervous. Be alert on the ice, and use common sense. With the proper precautions, ice fishing is every bit as safe as any other kind of angling.

“…it is best to thaw bait before you leave home…”

For the fishing gear, Miller prefers the Whisker Stick Ice Cat Rod by Whisker Seeker Tackle. It has the action needed for light biting fish, the bend to keep them pinned to the hook, and backbone to hoist the big ones. Add a small low-profile reel and 20-pound monofilament, and you are ready to catch cats. Miller likes mono over braid because it doesn’t soak up water. Braid soaks up water and in chilly temperatures, the line will freeze. This is not as much of a problem with monofilament.

Rigging varies, but Miller’s go-to rig resembles a drop shot rig for bass fishing. He ties a half-ounce bell sinker to the end of his line and makes a loop about a foot above it. He attaches a 4/0 Whisker Seeker Super J hook or small circle hook to the loop. This simple rig gives a direct connection between the bait and the fishing rod, allowing better bite detection from light biting fish.

While catfish tend to stay in the same general area throughout the winter, they do shift around with fluctuations in temperature and weather. Due to their likely movement, the first order of business when on the water is finding them. To do this, lots of holes are drilled and baits are spread out over a wide variety of depths. Active feeding fish will soon show you where they are. You can’t catch them if they aren’t there.

Miller and Hansen have created a home-made version of the popular Jaw Jacker, a set line device that keeps the rod bent and ready to automatically set the hook when a fish hits the bait. These serve a multitude of purposes.

For one, they anchor your rod more securely on the ice. If a giant fish hits a bait hard, the likelihood of losing a rod drops dramatically using these devices. This is extremely important as many times you are not right next to your fishing pole. Also, catfish often hit extremely light in the frigid temperatures during winter. This contraption sets the hook even when bites are so light you may not be able to detect them with a quick glance.

Another tactic Miller uses on the ice is active jigging. While active jigging he uses the Tomkat Ice Jig by Whisker Seeker. Using this technique, he lightly lifts and drops the bait in front of an active, cruising catfish. The jig is rattling and flashing, often enticing a bite. According to Miller, the strike is usually more powerful while enticing fish with the jig.

“Shad guts are the best bait to use for channel cats through the ice,” said Miller. “But minnows make a great back up. Just pinch off the tail and thread several onto the hook. They will hit that too.”

The list of baits go on. Small chunks of shad will also work. Miller has also heard chicken liver produces fish but has not personally tried it.

Whatever bait you go with, smaller baits are generally better than big ones in the winter. As the water gets colder, catfish metabolism slows, and they need less food to maintain their body mass. Big baits may get some attention, but smaller baits are usually what gets the take.

Shad guts can be collected prior to ice fishing and frozen in jars. More and more bait shops are starting to carry this delightful catfish bait as its effectiveness in cold water conditions is becoming better known. Cold weather prevents bait from spoiling while on the ice but also presents a unique challenge for thawing bait and keeping it from freezing again. Generally speaking, it is best to thaw bait before you leave home and keep it in a small cooler to prevent it from refreezing.

A Couple More Things to Keep in Mind

Ice fishing is a realm where comfort is everything. If you are cold, you won’t fish as long. Less time on the water means fewer fish. Dressing in layers is key. This allows you to adjust your comfort level while on the ice. You might be warm while you are hauling all of your gear out on the ice, but as soon as you slow down, you cool off. An extra jacket or sweatshirt will help warm you substantially.

Feet may be the toughest thing to keep warm. A pair of boats that are heavily insulated and have a thick sole help keep the chill of the ice from creeping up to your toes. I mean, you’re standing on an ice cube, it’s best to wear boots to match the scenario. A little trick I do is bring a rubber anti-fatigue mat that gives you a spacer between the ice and your feet. A strip of carpet will also help.

The winter doldrums are enough to make any northern catman go a little crazy. As the saying goes, there is no bad weather, just bad clothes. With proper attire, gear, tackle, and bait, a good time is awaiting you out on the water—I mean ice.