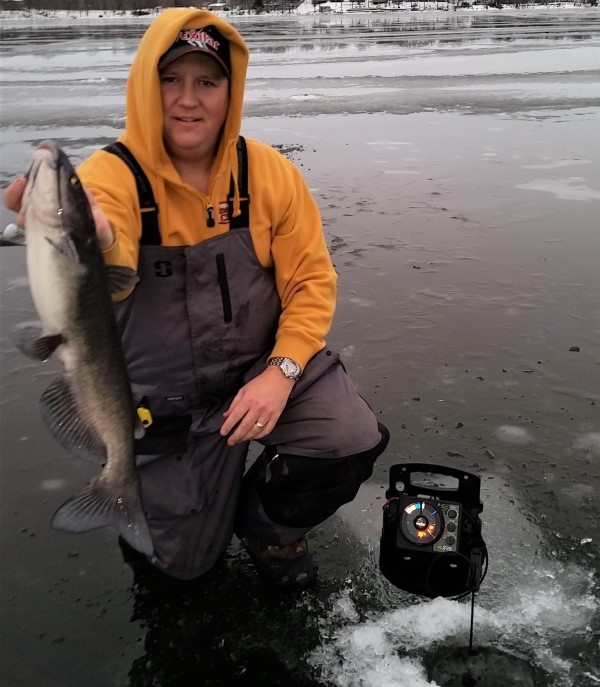 A guide to targeting catfish during the winter freeze.

Fishing guide Darren Troseth of 3 Rivers Fishing Adventures in Minnesota has targeted catfish on rivers in the St. Cloud area for several decades. In 2007 he discovered the thrill of targeting catfish through the ice, mostly out of necessity since open water is scarce during Minnesota’s brutal winter months.

“Compared to all other fish of the same size, catfish will put up just as good or better of a fight than anything else in the winter so I was drawn to them,” said Troseth.

Troseth carefully targets specific waterways where he knows there are large populations of catfish and he only goes after channel catfish as they are the most active. He seeks out bodies of water that are the warmest in the winter to find the deeper holes and areas with current. Since the ideal spots for catfish have the most inconsistent ice thickness safety is his top concern.

“Safety is very important, especially in areas of moving current and early/late ice. Basic knowledge of how ice forms and paying attention to recent weather patterns need to be part of the routine. People should always be using a spud bar to check ice thickness and wear safety picks, especially during early ice. A floatation type suit such as the Striker Ice Suit is a great idea too,” said Troseth.

The sluggish bottom-feeders are finicky when it comes to surviving the winter. They mostly lay low until spring so they will test your patience and skills. You significantly increase your chances of a bite if you know where to look and how to prepare. Here is some of the top advice for experiencing the fun and unpredictable surprise of ice fishing that can not only step up your catfishing game but change it entirely.

Understand catfish winter behavior
Catfish look for warmer water in the winter months so they are deeper (20-feet deep in many cases). Look for places with a soft bottom and structure or deep slow-moving water where catfish cluster and move together.

“…ideal spots for catfish have the most inconsistent ice thickness…””

Start with the most obvious places such as deep holes and breaks in the water.  If you are fishing the tributaries off of a major river you want to target the outside bends of creek channels in 15-25 feet of water.

Water column
Just because catfish migrate to deeper water doesn’t mean they are on the bottom. The feeders will suspend above the bottom from three-feet to 10-feet. Getting the bait in this “strike zone” is imperative. Anywhere above or below and the bite won’t happen. In the winter catfish are less motivated to go after food and have a slower metabolism so bait has to be presented properly.

Finding the fish
If the fish are not showing on the sonar, keep moving to areas of current such as the narrows between islands or bridges. Since catfish move in schools, they should be visible. The low light periods between 4-8 p.m. are best.

Bait
Don’t be afraid to use non-traditional baits and recharge often (at least once an hour) to maximize the scent.

“Some of our best nights have been using a small piece of chicken liver,” said Troseth. “I have also found that using a “glow” jig DOES help with the bite. Glow red and green are my favorites.”

Experimentation
Winter fishing requires experimentation. If you can see the catfish on the fish finder but they are not biting then you need to change something. You can try different depth, change the bait, or try movement in the presentation.

Tackle
A combination of tip-ups and a medium to heavy rod works well for channel catfish or you can use an automatic fisherman device. The ideal line is 8-10 pound ice braid and a fishing leader. As for hooks, use a thick single wire hook since most ice fishing spoons are not made for the strong jaws and soft lips of catfish.

Presentation
Very rarely will winter cats just come up and smack your bait. Cold water cats have a tendency to “taste” the bait and swim around it. They may hit it with their whiskers, circle around it some more and even go vertical by coming up from underneath to push it up. Try jigging a little to get their attention but do not overdo it or you will scare them.

Assess the bite
Pay close attention to your bite detection. The majority of cold water cats are light biters. Sometimes they will barely pull a float under or even move a spring bobber during the winter.

Final thoughts
Some of the best ice catfishing happens on natural lakes and rivers in states with the biggest freeze like Minnesota, Wisconsin, North Dakota, and Iowa. With a little practice and consulting with locals in the area, ice fishing for catfish can open up a whole new direction for catfish anglers.

Editors Note: For a detailed primer on ice fishing in general visit the OnTrack Fishing site.