Why We Catfish A Guest Editorial by “SmackDown Daddy” Stacey Gaston 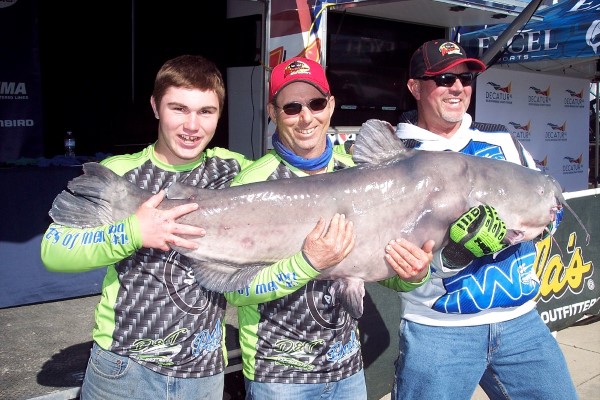 Passing it on to others.

My name is Stacey Gaston I’m 50 years old and been married to Dawn Gaston for over 26 years. We make our home in the small South Alabama town of Greenville. Our family consists of three kids. We have a daughter, Hagen and two sons, Zack and Daniel, and one granddaughter.

Those who don’t know me as Stacey may recognize the term or name “SmackDown.” In fact, some folks call me SmackDown Daddy or Mr. SmackDown. That name got attached to me a couple of years ago on social media.

When I would catch a fish, I would shout “SmackDown Baby or SmackDown Daddy or I just put the SmackDown on a good one.” That tag has stuck with me.

Catfishing is one of the things I’ve been doing all my life. My dad, Larry Gaston, was an outdoorsman. There has never been a time in my life that we didn’t hunt or fish.

There was a time, that I went through a mid-20s crisis and started bass fishing. But even then, I would be out on the river bass fishing, wishing I was catfishing. So, I just threw that mess down went back to doing what I loved—catfishing.

There are many people that have influenced me and that I look up to. And, there are a lot of great fishermen that you see in tournaments that I have great respect for. But probably the guys that have had the most impact on my catfishing are a couple of guys that you never see in a sports magazine or on a tournament stage. I watched every moved that these guys made. Their names are Jimmy Peavy and Jesse Kilpatrick. These two guys single handily made me the fisherman that I am today.

The sport of catfishing is growing fast. If it is to continue to grow, some protection of catfish must be considered. With catfish not being a game fish and with very few rules or regulations, it’s an open door for some to abuse the harvest of this species. I have witnessed personally, as many other fishermen have, what over-harvesting will do to a very productive reservoir. It will destroy it and it takes years for it to recover.

I practice and preach the protection of catfish not just for me but for future generations. We should all fish with the mindset that we want to ensure that the next generation has the opportunity to catch the same or better quality fish as we have. When an angler catches a trophy catfish he is hooked for life and the sport continues to grow.

I’ve set personal limits on my boat, and I urge others to do so. I never allow anyone to keep anything over 15 pounds. There is no reason to expect our sons and daughters to catch trophy fish if we continue to kill every potential trophy fish.

I’m a firm believer in freedom over anything else. What I mean by that is that I’m not against a guy or commercial fisherman trying to make a living or feed his family. But I am against abuse. I would like to see our states take more interest in some rules and regulations to further protect the catfish. I just believe there is a happy medium where all could benefit from it.

One of my passions is to pass on to others what I’ve learned over the years. In my heart, I want to see the sport of catfishing grow. My personal contribution to growing the sport is to teach others how to catch decent or trophy-sized catfish successfully and teach them the importance of conservation.

Number 1 was when I landed one that was 89.20 pounds. It was my biggest up to that date. If you hang around me much I’m filled with excitement and emotions. I told Jerry Ishcomer at a later date that if he and Noah had not been in the boat with me, I would have just got down on my knees in that boat and cried with joy.

That catch meant so much to me that I had Noah FaceTime my wife as I was fighting that fish. She had fished with me so much I wanted her to be a part of seeing us land him.

The most important thing to me about catfishing is the thrill of catching them. I would be lying to you if I told you anything else. I like catching catfish! Preferably BIG ones!

Running a close second is just being on the water fishing and enjoying every minute. It’s my place to get away. When I’m out fishing it’s like nothing else really exists. All the hustle and bustle of life seems to vanish.

There are not really but two things on my mind when I am on the water, the Lord and catching the catfish.

If I can leave you with anything, live your life to make a positive difference and influence others to do the same. God Bless you, tight lines and go put the SmackDown on one!