Dippin’ Bait with the Miller Girls 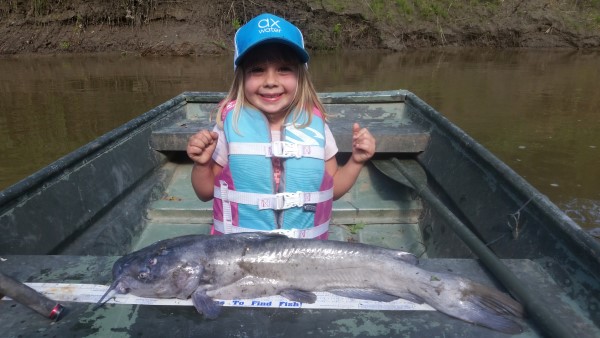 Kids and dip baits go together like peanut butter and jelly.

The channel catfish that inhabit the small prairie river near my home thrill and excite even seasoned veterans of the bewhiskered fish. To up the ante, I often take my 3 daughters, Naomi, Maia, and Ivy along to reel in the big ones. They have learned not to wrinkle their noise too much when they spell the odoriferous scent of a prime dip bait wafting in the boat, as they know it means they will be reeling the fish in soon!

Of course, the very first thing that kids need, before they step into the boat, are personal floatation devices. Even the slowest looking river can be dangerous, and my girls wear their PFD’s before they even set foot on the river bank. Kids are our most precious cargo in the boat, and they can never be too safe. Care also must be taken navigating around the wet, slick mud of the river. A kid mired in the mud isn’t a happy kid!

We fish out of my old 10-foot aluminum Ouachita Jon boat, which I have named “Whisker and Barbel.” With a boat that small, it helps that my girls are ages 10, 9, and 5. It takes a few minutes to get everyone situated and comfortable. Once the girls are safely loaded and ready, we push off the bank and into the current.

Lines in the Water

When fishing with kids, it’s important to remember that the journey is as important as the destination. Our boat is powered by a transom-mounted trolling motor and running upriver is not a quick endeavor. Rather than allow the kids to become bored, I will run near the bank or fallen trees. We will try to spot raccoon, mink or other critters tracks in the wet mud, and listen to the gurgle of the water running over logs and branches.

We also keep our eyes peeled around every bend and try to be the first to spot birds flushing off the slack water. They aren’t even surprised anymore to spot deer on the banks or beaver swimming in the dark water. It’s very important to make the outing a totally immersive experience, and not just a fishing trip. Riparian ecosystems are amazingly diverse, and a trip can be a great educational experience as well.

Once we find a likely looking snag or hole, out comes the dip baits. We have successfully used a variety of different dip baits, from Sonny’s to Magic Bait to Junnie’s. If it’s a dip bait, we’ve tried it. Dip baits work great for kids because they appeal to all sizes of catfish, and don’t require extra time to procure baitfish for cut bait.

My youngest, Ivy, loves to stir the concoction to a soupy consistency. In go the dip worms, and after a healthy dunk I lob the baits up near debris. To add some extra excitement, after getting the rods in the rod holders I will attach bells to the end. Besides watching for the tell-tale bobbing of a frisky fish pulling the bait, the clear tone of the bell gets everyone excited to start reeling.

My youngest daughter Ivy and I had gotten off to a slow start on a beautiful afternoon in August. Her sisters had decided to stay at home, and we were trying to catch a few fish for the pan. I was adding an eater-sized fish to the basket when the rod in the holder slammed down. Quickly removing the rod, I placed it in her hands and the battle was on!

It was immediately apparent that this wasn’t a pan-sized fish. Had blue water replaced the brown river water, it would have appeared that Ivy was fighting a marlin, as she strained against the rod. Her small hands cranked on the reel as the line wove a crazy pattern through the current. Her face was a mask of determination, and slowly but surely the fish was brought closer and closer to the boat. The sinker had just popped out of the water when the fish made a surge back to the bottom, its forked tail breaking the surface before disappearing.

“It’s a big one!” I exclaimed, and Ivy’s face broke into a determined smile. Continuing to crank on the Diawa reel, she brought the fish back. A stab in the water with the net brought the big cat aboard.

I was shocked. We consider anything over 30 inches a trophy on my home water, and Ivy’s cat fit the bill. The big cat measured just under 31 inches. We high-fived and marveled at her trophy before releasing it back into the depths. The smile on her face was worth the price of admission. That night at bedtime, she watched Youtube videos of monster cats as she fell asleep.

““… the memories of dip bait and catfish will be a thread that will connect us forever.”

Ivy’s big fish came on a solo daddy and daughter trip, but quite often the whole crew hits the river. Taking a cue from fishing trips with friend and master Red River fishing guide Brad Durick, the girls play rock paper scissors for the order of fish. The winner gets the first fish, second place gets second fish, and so on. The girls are always reminded that first fish isn’t necessarily the biggest.

With more little hands in the boat, each girl has a job. Ivy stirs and preps the dip bait, Naomi mans the fish basket, and Maia is the photographer. After the lines are out, the active wait begins.

Kids today have a fast-paced life. Cell phones, Youtube, electronics, and other daily distractions have kids wired to get what they want immediately. When I started them catfishing, they would quickly become bored if the action wasn’t fast and furious. However, they learned with more experience that active waiting has a beauty all its own. Knowing that a fish can grab the bait at any second, the girls sit attentively, watching and waiting. No electronic device can provide the excitement of a bent rod.

We had anchored upriver of a big snag. Among the first fish to hit was another good one. My middle daughter Maia was on the rod this time and fought the channel cat in the current for some time before she was able to wrestle it close enough to be netted. The pale chunky cat measured a touch over 27 inches. Much too big for the pan, the cat gave us a splash as it was released. The cool water felt good on the hot day, and we all got a laugh as water dripped down our faces.

Even when the action is on, kid’s attention spans don’t permit long hours in the boat, with the sun beating down and glaring off the water. I don’t plan long river outings, trying to keep a fishing trip to an hour or two. In some cases, we hook up a nice fish or two rather quickly, and call it a trip, while the girls still have the warm glow of success.

Last year my oldest Naomi and I hit the water together. The boat had only drifted 50 yards from the put-in point when I anchored up, intending to fish a deep outside bed. Naomi flung her bait up near the shore, while I cast mine into the deeper water, right on the current seam. She is the most introverted of my girls but opens up and loves to talk when we are fishing. She was describing the latest Harry Potter book she was reading when my rod got a jolt. Immediately I knew I had latched onto a nice fish, and it took some work to lift him off the bottom and into the current. With a big swirl near the boat, he was in the net.

We admired my 28-inch fish, snapping a few pictures before I returned him to the swift current. The sinker was wrapped up in the net, and I was working on unsnarling it when Naomi thought she had a hit on her pole. Pulling hard, it didn’t move. Sighing heavily, she reasoned it was a snag, and handed me the rod to extricate it. Giving the line a hard yank, I felt it give. Handing it back to her, I told her to reel the snag in. Reeling what we thought was a tree limb, we were shocked when the line began sizzling off the reel.

We were in quite the quandary. The net was out of commission, and I scrambled to free it. Displaying an amazing show of composure, Naomi slowly but surely brought the fish to the boat. Having no other option, my hand disappeared in the murky water, and I got a firm grip on the bottom jaw of the cat. With a heave, it was aboard.

Her fish was a monster, measuring a touch over 30 inches. Even though we had been on the water for less than an hour, there was no way to improve upon the day. I turned the boat for home, with a beaming young lady at the helm.

What Matters in the End

My girls love to catch catfish. However, as time goes on, it’s not the size or number of fish that are remembered. It’s the cool summer breeze on the river, the gentle burble of the water, and quality time spent in an ever-changing world that we remember. In the blink of an eye, they will be off to college and their own lives, and the memories of dip bait and catfish will be a thread that will connect us forever.