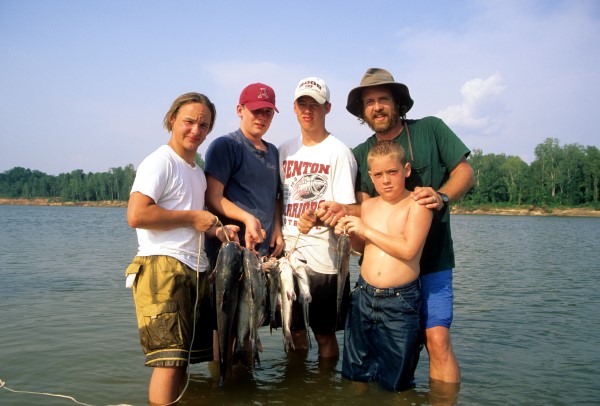 It’s time to plan an unforgettable adventure with your kids.

From the start, it was a trip for my sons—Matthew, 12, Shaun, 11, and Jared, 10. While they were still young, I wanted to plan an outdoor adventure they would never forget. So, I came up with the idea of a 60-mile floating/camping trip on the lower Arkansas and Mississippi rivers. The boys dubbed it “The Survival Trip” and invited three friends to join us for our fun get-away: our family friend “Uncle Bill” Hailey, my best friend Lewis Peeler and Lew’s 14-year-old son, Justin.

After months of planning, we began our float below Wilbur Mills Dam in southeast Arkansas, casting off in a canoe and two johnboats. Camping gear we had, but other than sandwich fixings, we agreed our food would come from the river. No fish, no supper. Hand-held games, radios and other modern conveniences were banned.

Rules were banned as well. The boys could do as they pleased as long as they wore life jackets when swimming and boating. Their fun, I decided, shouldn’t be encumbered by unnecessary restrictions.

We allotted three days for our journey. Day One would take us 15 miles downriver. On Day Two, we’d make camp at the mouth of the Arkansas, 25 miles farther on. Day Three would find us at our takeout point, a 20-mile float down the mighty Mississippi.

Our first stop was the old Yancopin Railroad Bridge, three miles below the dam. The tracks have gone unused for decades, and the bridge’s steel framework looked rusty and old. Two outer spans were raised as if someone were waiting for a steamboat to pass.

Except for a lone deer camp halfway down, the Yancopin Bridge is the last bit of civilization on the lower Arkansas. Downstream there is only the river and the big woods around it—and on this day, four boys eager to make camp and start their fun.

We pitched our tents on Melinda Bar, a high, mile-long sandbar that has long been a landmark for river travelers. When camp was ready, the boys went off to explore. Lew and I paddled out and set trotlines.

Justin fished and caught a nice bass, dinner for two. Several catfish caught by the boys soon joined it on a stringer. We feasted on them that night, then retired to the tents away from the mosquitoes. We had survived Day One.

I arose at dawn. The boats were gone. The river, shrouded in fog, had risen six feet overnight.

I awakened the others and, after some discussion, decided to cast off on an air mattress I slept on that night.

“What if you don’t find the boats, Dad?” the boys asked.

“Then I’ll see you in New Orleans next week.”

I found the canoe a few miles downstream. The johnboats were farther on. With sighs of relief, we rounded them up, broke camp and soon were motoring downstream again.

White sandbars stretched to the horizon, cleaner and prettier than Florida beaches. We stopped now and then to swim and fish, but mostly we floated, watching as the scenery unfolded. We agreed that none of us ever felt so far from civilization as we did on that day. What a wonderful feeling it was.

“Rules were banned … The boys could do as they pleased as long as they wore life jackets when swimming and boating.”

Lewis and I caught some crappie in a small oxbow. We ate them that evening beneath a painted sky at the mouth of the great river. A rain shower drenched us as we made camp, but the clouds soon broke, and as the sun set, it bathed distant thunderheads in salmon-colored light. The boys waded out to swim and fish in the first currents of the Mississippi River.

Civilization rejoined us here. Loggers worked the big timber just down from the Arkansas’ mouth, the first people we’d encountered since leaving the dam. Homes could be seen. A grainery. Roads. Power lines. Buoys. Barges. Litter. We left the wilderness behind.

“Imagine what it must have been like a long time ago,” I told Shaun and Jared as we made our way downstream. “Have you heard of Hernando DeSoto?”

“Yes,” the boys said. They learned of him in school.

“He landed at the place where we camped last night in 1542.”

“How ‘bout Marquette and Joliet? And La Salle? Have you heard of them, too?

“They camped there, too, with a great tribe of Indians, way back in the 1600s. La Salle and his men built a great cross and raised it there. He claimed these lands for the king of France. Mark Twain came by here many times, and John James Audubon, the great painter.”

They turned and looked at each other with eyes opened wide. History was never so fun.

We floated several hours, absorbing the river’s majesty. All of us felt exhilarated. No one wanted to see the takeout.

Unfortunately, all good things must end. At four that afternoon, our float trip ended.

During each of the next three summers, we did it again. On the last trip, I went out when everyone was asleep and sat by the water. It was cool; the mosquitoes were gone. The stars shone brighter than I remembered.

As I sat there, I found myself overwhelmed by a feeling of great awe. And I was thankful I could share the wonders of the rivers with my sons.

Perhaps you will never float the Arkansas and Mississippi with your kids. But somewhere near your home is a wild river or a little lake or a back-forty pond on a neighbor’s farm where you can enjoy a special trip together. All it takes is time.

Plan it now. Keep it simple. Leave the rules at home. Open the door to the great outdoors and step inside with your children.

Disney World and Six Flags were never so good.