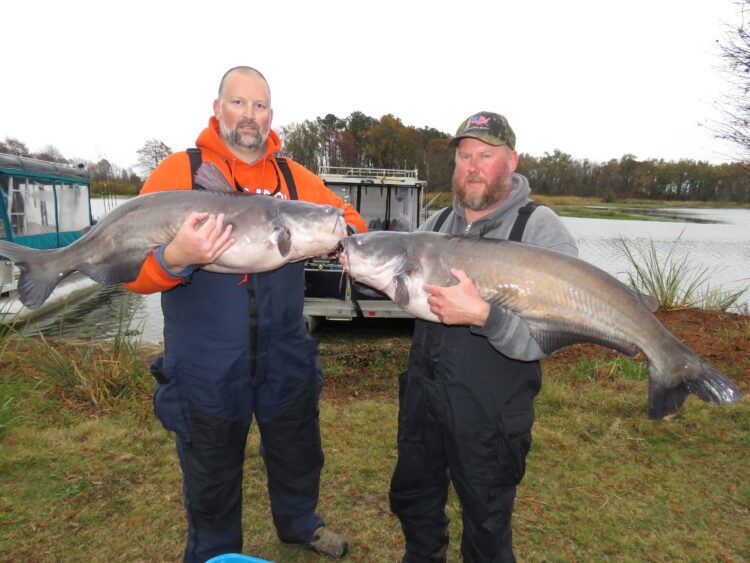 When Kevin Davis had the notion to produce the Big Cat Shootout, he wanted to challenge catfish anglers to show him their biggest fish. He developed a tournament format aimed at big fish and a big payout. Teams pay $500 each to fish knowing that 100 percent of the entry fees will be distributed to the top few teams. With 28 teams entered the 2019 split went to the top three teams. An optional Big Fish Pot was entered by all the anglers in a winner take all format.

Friday, December 13, the first day of the tournament, challenged anglers with cold windy weather and tough fishing conditions. Nevertheless, all but one team brought fish to the scales. In total the weighed fish came to more than 1500 pounds with tournament rules allowing only two fish per angler. The average Arkansas blue weighed in on day one went more than 28 pounds each.

At the end of day one, the Father/Son team of Chris and Bobby Jackson and John Walker were in the lead with two fish that weighed 105.6 pounds. One of their Santee Cooper bruisers was Big Fish of the day at 63.8 pounds.

The runner-up team on day one was Jeff and Dylan Brinkley with a Big Fish of 62.6 pounds and a total weight of 88.95 pounds in their two fish limit. The top six teams had more than 70 pounds and an average fish weight of near 40 pounds.

The good bite on day one left the field with a tight range of day-one weights. Some anglers would only be fishing for Big Fish on day two, but most were still in the running. It was anybody’s tournament to win or lose.

Day two started with calm winds, light rain, and hopeful anglers. As predicted, the rain ended early and left a small window of good fishing. Then, around 9:30 am the wind began to pick up.

“Once it began to blow it came up fast,” reported Shootout angler, Ray Waldrop. “From then on it was very rough conditions.”

All kinds of stories began to surface as anglers made it back to the weigh-in at Black’s Camp. Five-foot waves and water in the boats were reported often. Where they could, anglers reported moving from the open lake to any kind of water offering some protection from the wind.

One captain reported an encounter with three larger rollers in succession. He said he kind of rolled over the first two, but the third one stopped the boat in its tracks as the nose buried into the wave. Another boat that had been tied to a stump rose up on a wave that let it back down on the stump and damaged the rail on his pontoon. Needless to say, it was tough fishing on Santee Cooper.

When the weigh-in was complete the consistency of Mike Durham from Liberty, SC and Brad McCall, from Anderson, SC, claimed top honors. They added 73.78 pounds to their day-one weight of 79.25 pounds for a total of 153.05 pounds. Those four fish earned them a first-place check of $7,000. They improved on their third-place finish from last year.

Day two was rough,” Durham said. “We caught one fish where we caught fish yesterday and the wind blew us off. We moved to some fish that I had found on the other side of the lake earlier in the week. There were so many boats around we couldn’t fish em’. So, we just rode until we found something we liked. We let the wind blow us across it and got lucky and caught another good fish.”

Durham and McCall caught all their fish on whole gizzard shad.

“We would cut one side off or just put a cut in them to make them bleed,” explained Durham. “It seemed like cutting one fillet off worked good, or cutting up the back and leaving the fillet to flap worked good.”

“The whole gizzard shad was a big part of catching fish for us the last couple of days,” added McCall. “I really do believe finding 20 to 25 feet of water was a bigger deal. That is a little shallower than we normally fish. Mike came down and stayed the week before the tournament to get some prefishing in.”

“There was one hump,” added McCall. “We drifted over the hump and had a big fish that came off. Another few minutes later another rod went down. I reeled down on it. I guessed it was right at  40. We caught 4 fish off of that one hump and couldn’t tell enough difference in them with the scales to cull them.”

The runner up spot went to the father/son team of Bobby and Chris Jackson from North Carolina and “Big” John Walker from Kentucky. After leading day one they finished a less than one pound out of the lead with 152.10 pounds in a super close finish. They earned a check for $4,200. The team also had Big Fish of the tournament at 63.8 pounds for an additional $1,400 in prize money.

“We had two pretty good days of fishing,” reported Chris Jackson. “It’s was rough weather and rough water. We fished the lower lake (Moultrie) both days. We had a really good bite yesterday on gizzard shad.”

“We fished the same area on day two,” continued Chris. “The fish were there, but we just couldn’t get them to bite. It got really windy and seemed to shut them down. We had 25 MPH winds out there today. We had to cull a 40 yesterday—we needed it today!”

“It was a windy day,” reported Williams. “We started off over on the west side of the lower lake trying to stay out of the wind. We got a good fish on early and broke him off. Then, about an hour later we caught out biggest fish. The wind got so rough we moved around a lot.”

“We actually didn’t put gas in the boat yesterday,” admitted Williams. “So, we took the boat out of the water and went and got some gas. Then we drove all the way back over to the other side of the lake back in a little finger of water up in a cove. We drifted in about 9 feet of water and caught two other 40’s in that shallow water.

“It was windy and tough,” added Lineberry. “The waves were just breaking and it was really scary out there. It is hard to control the boat in those conditions.”

The team caught their fish on cut white perch which they caught in the upper lake using a Sabiki Rig preceding the tournament.

“We used both perch and mullet,” concluded Williams. “Not a single fish came on mullet. They all came on perch.”

The lakes of Santee Cooper continue to grow their reputation as a big catfish destination. They are a perfect location for a major tournament and Black’s Camp Big Cat Shootout promises to be just that. Mother Nature reared her ugly head again, but the anglers were not to be outdone. They battle the inclement weather to bring big cat after big cat to the scales. Given the two fish weigh-in just about any fish that came to the scales was a good one. Congrats to all the teams that fought the bitter weather to produce a successful tournament.

Thanks are due also to the tournament director, Kevin Davis, and weighmaster, Mark Coburn for keeping everything running smoothly. Stay connected with the Black’s Camp Big Cat Shootout to learn the dates and details of next year’s event.

For more information on the area visit the website at www.santeecoopercountry.org and www.berkeleycountysc.gov.