Why We Catfish A Guest Editorial by Odell “Bank Boy” Allen 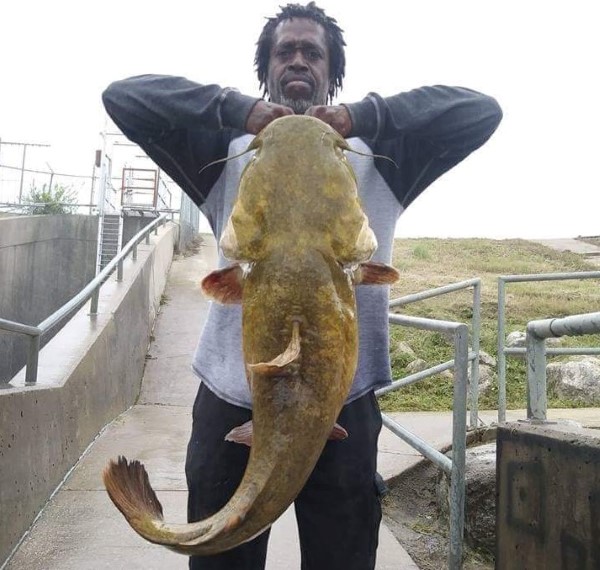 Editor’s Note: Forty-seven-year-old Odell Allen has followed his passion for fishing to a calling that includes influencing his neighborhood kids. He actively shares his fishing knowledge with local kids by taking them fishing and giving them their own rod and reel. He also shares catfishing with the public through his YouTube channel—Bank Boyz Gar and Catfishing.

My name is Odell Allen. I was born and raised in Grand Prairie TX, in a community called Dalworth. I was raised bank fishing the waters of the Trinity River and lakes around the DFW area in Texas. As a kid, I was introduced to catfishing by my grandmother, Georgia Fisher, and father, Odell Robertson, at a very young age.

We fished the river and lakes around the city using shrimp, chicken liver, and worms (for me) as bait. We fished for channel catfish, mud catfish, and bluegill, but seemed to catch some of everything but mainly catfish.

We always kept the smaller catfish for eating while releasing the bigger ones. I was taught that the most important thing was to release the big fish and only keep the smaller ones. Because the bigger fish are better at producing and protecting the babies.

My dad always challenged me to grab the catfish by the bottom lip and try to endure the pressure from the bite, lol.

He was just having fun, but at the same time saying, “You gotta’ be a man to be able to grab it by the lip.” So, I had to prove I was a man.

In my teenage years, I’d get out of school and straight to the river I’d go. Fishing for catfish with my cousins, Chris and Wayne Scott. We would hop on our bikes with our bait and tackle and ride for miles to the river. We had the time of our lives getting muddy and tired while catching catfish until the sun went down.

Sometimes our adventures would get us in trouble for coming home so late and muddy. But our parents were always proud of the catches we brought home. Those fish went to the dinner table too. We eat a lot of fish in my family, only eaters though.

Fishing is always an adventure because you never know what you might catch. One of my best memories was in the summer of 2017. I was fishing at Joe Pool Lake Dam in Grand Prairie TX using a small 7-foot Glow Stick rod. I was using worms to catch bluegill that I planned to use for night fishing. I hooked a 45-pound flathead catfish, on worms. That flat turned out to be my personal best flathead. I successfully landed it, weighed it, took some pics, and released him back into the water! My passion is catching Monster Fish and I love catching flatheads.

Now that I’m in my adult years, I’ve opened a successful fishing group called BANK BOYZ GAR & CATFISHING. I use this as a platform for sharing ideas and making educational fishing videos on how to rig lines and what bait to use to catch catfish in different seasons.

I also guide kids and adults on amazing fishing trips. Those trips are an opportunity to pass on the knowledge of catfishing while making memories. Seeing the smiles, joy, and happiness on the faces of others is the best reward.

My new passion, and mission, are to get the troubled youth out on the lakes and rivers and off the streets. I want them to be into fishing and hunting instead of gangs, drugs, and crime. I know from experience that the streets are tough for some of the kids.

The majority of the kids that I have taken fishing are now hooked. Their parents call me and say that all they talk about is going fishing. They get addicted to fishing and that is all they want to do.

I’m showing them that fishing and the outdoors is a lot more fun than video games, running the streets in gangs, and doing drugs. The fun of catching a monster fish will hook anybody. I want to see the kids learn what nature has to offer and how it is better for them than what the streets have to offer.

In the big picture, I catfish because I love the peace of being by the water. I use the time to clear my mind as I sit waiting on that BIG CATFISH to fold my pole over. I always use big pieces of bait, because the bigger the bait the bigger the fish. So, when I finally get that bite, I know it’s big and I am soon to experience the adrenaline rush of a long fight. And that’s why I love catfishing.