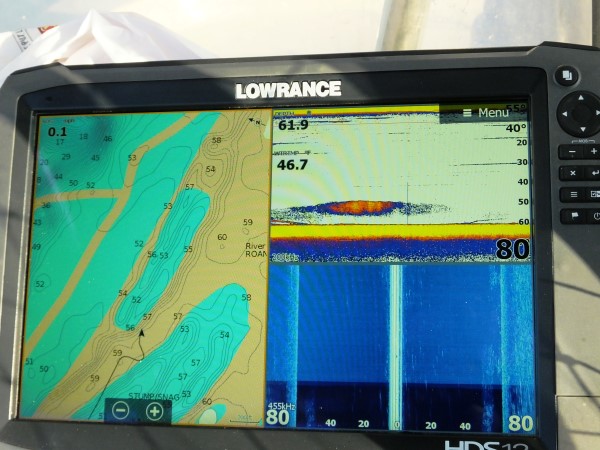 King and Royce said the use of electronics to pinpoint forage and fish is a key to wintertime success.

Wintertime has become many catfish fanatic’s favorite time of the year, and with good reason. Many experienced catfishermen rank winter as prime time to target trophy catfish, especially blue catfish.

Phil King hails from Corinth, Mississippi and has 43 years of catfishing experience to his credit. Now retired from guiding, King’s ‘backyard’ for catfishing is the Tennessee River chain of lakes that flow through northern Alabama, but he’s also fished extensively on the Mississippi and Ohio Rivers.

Kings’ experience in wintertime fishing has helped him develop some tactics that work exceptionally well for him.

“Regardless of where I fish, water temperature plays a major role,” King said. “If the water temperature dips to the mid-40’s range catfish are going to be much slower in their feeding activity. They will bite and they may bite aggressively, but it requires the fisherman to adjust to daily patterns.”

King said one example is when he’s consistently catching catfish on a controlled drift pattern and the water temperature dips, his first adjustment is to slow the drift speed.

“I’ll drift at 0.5 miles per hour and faster most of the year, but when the water’s cold I slow it down to 0.4 and if that doesn’t work, I’ll go slower,” he said. “In addition to speed control, it’s crucial to find forage and big catfish marks on the graph so I know I’m working the right areas. I don’t randomly drift.”

King said his bread and butter tactic when the water gets cold is a controlled drift using his electric motor.

“I use my graph to scan the ledges, drops, points, bluffs, and deep holes,” he said. “This searching pattern holds true for drifting or anchoring techniques. When I see forage and big fish marks that are catfish I’ll fish.”

King said fast-paced action occurs in cold weather when drifting but catfish occasionally prefer the bait stationary instead of chasing a moving target.

“If drifting doesn’t produce, I’ll anchor and fan cast baits around the boat into different depths of water along the target,” he said.

He’ll give an anchored setup about 45 minutes, but usually he’ll have fish hooked in the first 15-to-30-minutes if the fish are in a bite mood. If action is slow, he’ll move to another spot.

King said excellent winter catfishing can occur anywhere on a given lake or river but he prefers to target the middle-to-the-lower-end of the large lakes he frequently fishes.

Zakk Royce guides out of Lake Gaston in North Carolina and has multiple triple-digit sized fish to his credit. He also routinely catches large numbers of catfish, primarily blue catfish, throughout the winter.

“I love winter fishing primarily because the trophy fish bite is the most consistent of the year and we still catch lots of catfish,” he said.

Royce said the majority of his winter fishing will be in deep water but catfish may move shallower in low light conditions.

“Deep water is relative to the lake or river you’re fishing but follow the forage and you’ll be in the right area,” he said. “Occasionally mornings are good for shallow water action but my experience has been during late afternoons the forage may migrate into shallower water on points or humps or even move into creeks or coves. The catfish will follow and feed heavily. Also, don’t overlook shallower water during winter.”

Royce (919-724-2474) said his primary tactic is a controlled drift using his electric motor to move the boat on a specific route. Like King, he’ll scan ledges, humps, and points and work specific contours where forage and fish are present.

“One very productive pattern on Gaston, and other lakes I’ve fished during the winter, is fishing a channel ledge,” he said. “I may work the bottom in the deepest water or along the shallower top of the ledge where it falls into the deep water. Sometimes fish will be at a specific depth along the drop.”

Royce said he also uses planer boards to spread his bait presentations further away from the boat. He’ll often run two planer boards on each side of the boat as well as pulling lines far behind the boat.

“Planer boards allow me to work baits much further from the boat and in some cases, I’ll have baits working the top and bottom of a ledge and multiple depths in between,” he said. “I think having baits away from the boat is more productive in cold weather. I also pull baits farther behind the boat, often 250-feet or more.”

Royce said he prefers natural baits from the water he’s fishing and he’ll often scale down bait size during winter because bigger is not always better.

“With cold water, the metabolic rate of fish is slower and I’ve found using the forage catfish are currently feeding on gives me the edge,” Royce said. “I’ll carry plenty of bait with me to keep fresh bait on the line.”

King said to fish whenever you can but the second and third day after a frontal passage is usually best for winter fishing.

“If you can be selective on the days you fish, that third day after a front, with a bit of warming, can be THE time for best winter action,” he said.