Blue Catfish: The Senior Citizens of the Aquatic World 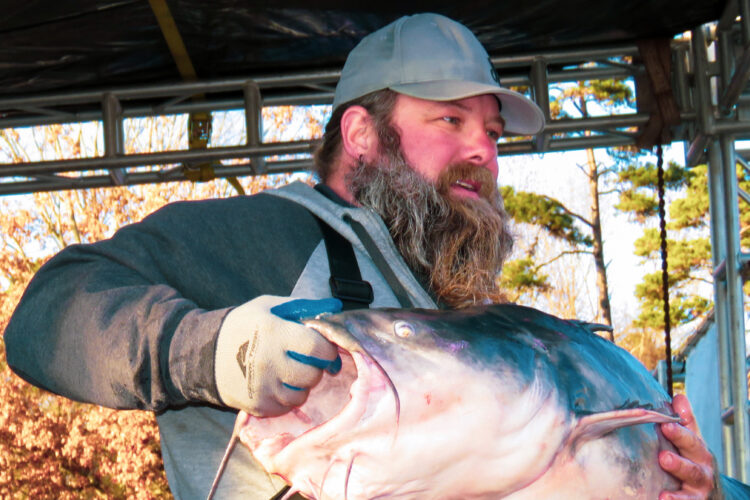 Justin Neese and his cousin, Jase Gore, are shown holding Justin’s personal best 107-pound blue cat back in 2017. The big cat is definitely one of the Missouri River’s old-timers.

Blue Catfish: The Senior Citizens of the Aquatic World

It can take years for some cats to grow to trophy sizes, but it’s worth the wait for anglers.

The next time you catch a giant blue catfish, respect your elder. You have just landed one of the true old-timers in the freshwater aquatic system.

“We have aged blue catfish here in Missouri’s rivers that are more than 30 years old,” said Kyle Winders, an aquatic resource scientist for the Missouri Department of Conservation. “To put that into perspective, a 30-year-old catfish is comparable to a human living past 100. It’s certainly not the norm, but it does happen. Blue catfish are one of the most long-lived species we have.”

The only species in Missouri’s river systems that lives longer? Sturgeon.

“The sturgeon can live past 60 years,” Winders said. “That’s an incredible lifespan.”

Winders and his crew recently conducted a survey on Missouri’s big rivers, the Missouri and the Mississippi, to determine what makes blue and flathead catfish tick. They examined growth rates, average length, movement, harvest and natural mortality.

They started by capturing several thousand catfish through electrofishing surveys, then tagged them and offered rewards to the fishermen who caught those fish and returned the tags.

From the start, researchers were impressed by the size of the blue catfish they found.

“We saw quite a few fish 50 pounds or bigger,” Winders said. “Our biggest was 68 pounds. Fish that size are rare, but not super rare. They’re out there.”

Winders estimates that the average lifespan of blue catfish in Missouri’s river systems is 21 to 22 years. By that time, many individuals will grow to sizes of 50 pounds or larger, he said.

“Growth rate will vary,” Winders said. “Some individuals will reach 50 pounds in 18 years, while others might take 25 years to reach that size.”

In the rivers, blue catfish will average 7 to 8 inches of growth in their first year, then two inches per year after that. By the time they grow to 35 inches, they start growing more in girth than length.

“The females will start putting on girth earlier than the males,” Winders said.

The blue cats grow faster in Missouri’s rivers than in its reservoirs. While Lake of the Ozarks and Truman have impressive blue-cat populations, they generally don’t produce the monstrous fish that the rivers do. Part of that, biologists say, is because of a higher density of blue catfish and more harvest.

“The slot limit was put in place on Truman Lake and Lake of the Ozarks because of extremely high harvest of blue catfish once they started to get over about 20 inches,” said Chris Brooke, a fisheries management biologist for the Department of Conservation. “The slot limit protects fish from 36 to 34 inches to allow them to grow larger before fishermen can harvest them.”

But even in the reservoirs, there are individuals that survive long enough to grow to impressive sizes.

“One good example of fish we have aged was an 88-pound blue catfish at Lake of the Ozarks,” said Zach Ford, a fisheries management biologist for the Department of Conservation. “That fish was age 19.”

“I believe a 50-pound blue catfish in Truman could realistically be as young as 16 and as old as almost 30 years,” Brooke said.

Though gizzard shad make up the majority of their diet in Missouri, they are opportunists. In the river systems blue catfish will also feed heavily on Asian carp. In reservoirs, they will eat everything from panfish to zebra mussels.

“They will eat a variety of things in our reservoirs,” Ford said. “They are only limited by the gape size of their mouth and throat.”

So, where do those blue catfish feed? In Winders’ research study on Missouri’s major rivers, more than half of the tagged fish that were ultimately caught by fishermen strayed less than 20 miles from the spot where they were first found. But there were eye-opening exceptions.

“There were a couple of blue catfish over 40 pounds that moved more than 500 river miles in a two-year span,” Winders said. “We had one fish that was tagged near Waverly (MO) travel up the Missouri River into Nebraska, into the Platte River, then into the Elkhorn River, where it was caught.”

In comparison, the flathead catfish that were tagged showed fewer tendencies to travel. Eighty percent of those fish were caught within 20 miles of where they were found during electrofishing.

That didn’t make either species vulnerable to fishermen. Winders was surprised at how few of the reward tags were turned in.

The fisheries term, exploitation rate, is used by resource scientists to measure harvest of a stock. For example, if a stock were measured at 1000 tons and the annual harvest is 200 tons, the exploitation rate is 20 percent.

“On an annual basis, the exploitation rate of the fish we tagged was only 10 to 20 percent,” Winders said.