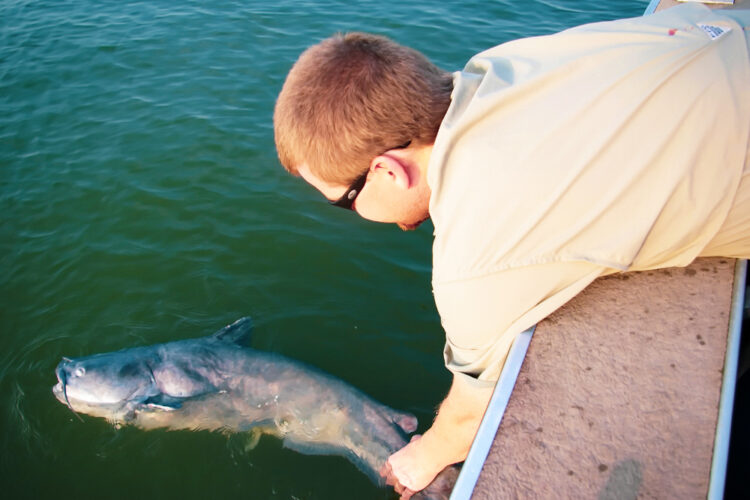 Renowned New York-based fly fisherman, author and film maker Lee Wulff was promoting catch and release as early as 1936 with the phrase, “Game fish are too valuable to be caught only once.” That saying applies to catfishing as much as fly fishing and is applicable just as much today as in those early years. (Photo: Keith “Catfish” Sutton)

It’s time you join the increasing numbers of catfish fans who are releasing big fish for other anglers to catch again.

In some states, catfish are still are considered roughfish, and you can legally keep as many as you want—10, 20, 100, 500. Length limits are unheard of in many parts of the United States.

Commercial fishing is also unregulated in many areas. On some of the country’s most famous trophy catfish waters, for instance, commercial anglers are allowed to use trotlines to catch cats. As long as they buy the proper tags, each can use up to 2,000 hooks. It’s not unusual there to see a commercial fisherman unloading a boat containing 100 or more catfish over 30 pounds.

Unfortunately, facts such as these lead many anglers to believe that harvest restrictions are unnecessary. If the state says it’s OK, then there must be plenty of catfish to support such practices. And after all, excellent populations of catfish remain all around the country, even in many heavily fished waters. Why should we bother with restrictions?

At one time, our country’s bass anglers were asking the same question. Most of them used hit-and-miss fishing tactics, just as most of today’s catfish anglers do. And bass seemed a limitless resource. How could we possibly hurt their numbers?

Enter the modern age of bass fishing. Around the early 1970s, a wide variety of sophisticated fishing equipment suddenly became available to the average bass angler—depth finders, more effective lures, better rods and reels, and other more effective gear. Anglers also were flooded with more and more information on how to catch more bass—in magazines and books, on television, on videos. All these enabled bass anglers to become more skillful and efficient.

As bassing became more popular, we learned that sport fishermen could adversely impact the quality of fishing by removing too many fish. Catch-and-release fishing, once scorned, quickly became the norm. Under pressure from sport fishermen, states started implementing more restrictive harvest regulations to protect and enhance our bass fisheries. Now it’s unusual to find a body of water that doesn’t have a variety of harvest restrictions—slot limits, length limits, catch-and-release only, etc.

Catfishing is now at a similar crossroads. The day is coming soon when many more catfish anglers will have the ability to consistently make outstanding catches. With the rising popularity of the sport, and as catfishermen become more skillful and efficient, the need for voluntary and mandatory harvest restrictions will become more necessary. The question is, will fisheries managers and catfishermen apply the lessons learned with other fish before catfish populations are harmed?

To a large extent, the answer to that question depends on you. Changes won’t be realized until catfishermen actively work to bring them about. You can help by contacting your elected and appointed representatives and communicating your concerns. Let them know that catfish are more than roughfish. They’re among the most popular sportfish in the nation, and properly managed sport fisheries can generate millions of dollars for a state’s economy.

Voluntary catch-and-release fishing is a good way to protect and perpetuate our outstanding trophy catfishing opportunities. Keep smaller fish to eat if you like, but release older, less common trophies to be caught again.

Be sure to do it right. Catfish are extremely hardy. An individual may live for hours out of the water. But if you expect a cat to survive following release, it’s important to handle it properly. Follow these simple tips, and you can greatly increase the chances the fish you turn back will remain healthy and available for you or some other fisherman to land again.

The best catfishing, I ever enjoyed was on Manitoba’s Red River, one of those rare catfish rivers where barbless hooks are required by law. The daily channel cat limit was four, none of which could exceed 24 inches. On a three-day fishing trip there, I caught around 50 channel cats, all of which were larger than any channel cat I had previously caught during a lifetime spent pursuing them. The smallest weighed approximately 17 pounds, the largest approximately 35 pounds.

I have often wondered: if a river in Canada, where the growing season is short, can produce such tremendous numbers of trophy catfish, what might a similar river in the U.S. produce if similar fishing restrictions were placed upon it? If more catfish anglers practiced voluntary catch and release, if more of us push law-makers to enact reasonable harvest restrictions, perhaps someday we’ll have the answer to that question.

It’s important for catfish anglers to show respect and consideration for other people who use our fisheries resources. We need to set a good example for others to follow, and leave positive images of catfishermen for those who don’t fish or who fish for other species.

Here are some tips that may help.