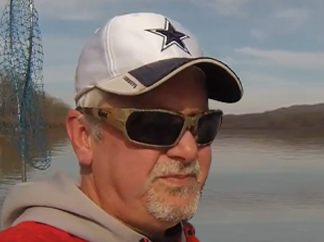 Harley Neal fishes with a strong conservation ethic. That ethic was strengthened and altered when his friend, Roger DeMint Jr (Muskrat Adventures YouTube channel), boated a 25-pound flathead that had a broken bottom jaw.

“We imagined that it was from holding it vertically by grips,” reported Neal. “I try not to use the plastic grips or the Boga Grips on them once they’re a bit larger.”

“When handling fish generally, I’ve gone the way of wearing gloves,” continued Neal. “With anything above 15 pounds I use wet gloves for fish care and control instead of any gripper.”

“Secondly, just be mindful of their gills,” added Neal. “I’ve recently seen many people holding fish by their gills. It is not immediately obvious that damage is done. But the small injuries to their gills can compromise their oxygen transfer system and be detrimental to their recovery.”

“I would recommend using a glove(s) and wetting them when handling the larger fish, rather than using the grips,” concluded Neal. “The reason I practice safe fish handling and Catch-Photo-Release (CPR) and try to get them back in the water as healthy as possible, is that I would like to meet up with them again later on!”

Editor’s Note: Harley Neal is an avid catfish angler and YouTuber. He fishes mostly where the Kanawha River dumps into the Ohio River at Point Pleasant, West Virginia, and at the Robert C Byrd Dam, just below Gallipolis, Ohio. His YouTube channel carries the name, Harley Neal. Check it out.