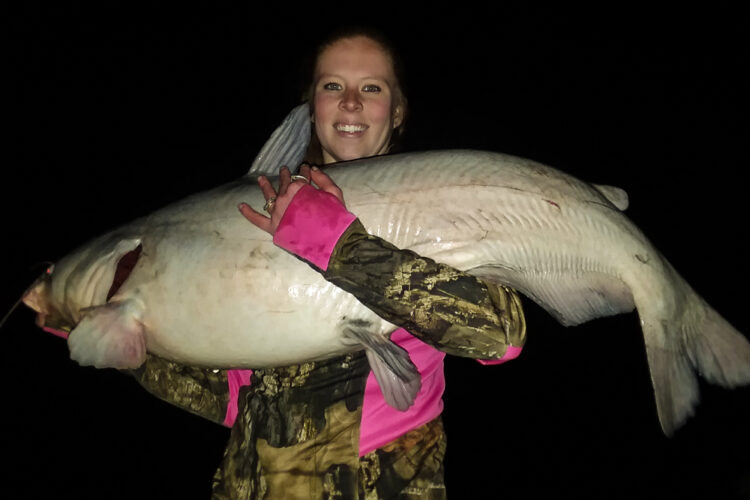 Morgan is shown here with her PB 44.7-pound blue cat. No more pay lakes for her. She caught this beautiful blue on the Kanawha River.

Educating others about pay lakes.

A Guest Editorial by Tyler and Morgan Jeffrey

There are plenty of reasons why we love catfishing. They include spending hours catching bait before even starting to fish; throwing the net until your arms feel like they’ll fall off; it’s braving the freezing cold, burning hot, and pouring rain; it’s the late nights going into early mornings; it’s going to work dog tired because we were out chasing fish until a few hours before; and it is the fight!

By now you have guessed—we love every single aspect of catfishing. We are Tyler and Morgan Jeffrey from Elkview, WV. We normally fish the Kanawha and Elk Rivers, but travel all over chasing fish. We began fishing at an early age in creeks and ponds with our grandparents and uncles. Catfish were always the most fun because they fought so hard.

Unfortunately, where we live, is a pay lake. I know this is a touchy subject in catfishing and rightfully so, but stick with us. In our experience that was the ONLY place anybody caught big fish. We never questioned how they got there or where they came from. We just fished. It’s all we knew.

A couple of years ago, we heard about the giant catfish on the James River and we were taken by the thought of catching big catfish from the river.

We decided to give it a try and went out with Trey Thorpe of FishinWithFatt James River Guide Service. He was hesitant to take us because of our history with pay lakes. We promised him that if he proved to us that it was possible to catch big river catfish we’d never go back to the pay lake.

Twenty-two-year-old Tyler and 24-year-old Morgan Jeffrey love catfishing. Admittedly they fished pay lakes in their earlier years. But they had friends who were willing to educate them on the effects of pay lakes and show them how to catch trophy catfish in their natural habitat. Now they are spokesmen and educators for catfishing the old fashion way in lakes and rivers.

Within twenty minutes we had a fifty-pound blue in the boat! Trey taught us that those fish we had been catching are taken from their natural waters to be put into the pay lakes. We had never really thought about it. We knew they had to come from somewhere but he really opened our eyes to the fact that it takes catfish years to grow to trophy size, just to be ripped from the river and thrown into those ponds.

A great example of the decline is the Ohio River, right near where we live. It was once an amazing catfish fishery, but pay lakes have drastically impacted the fishing in the river. It is slowly coming back, but is nowhere near what it once was.

We learned a lot that day and went back home to try it out. Well it didn’t work. We went MONTHS without even seeing a single channel cat, much less a blue or flathead.

We couldn’t even catch shad in the throw net. We only used creek chubs and bluegill. We were barely even getting bites most days, but we kept going.

We eventually went to Tennessee to fish Watts Bar Lake. Our friend, Wallace Sitzes, was nice enough to take us out on his boat. He taught us a lot and again proved it is possible to land trophy catfish out of the river. We went home with more knowledge and kept trying and failing. Not forever though. Eventually something clicked!

A day came where we went out and caught almost a dozen shad. We were thrilled! We also started getting more and more bites and learning what the fish do and where they go in different situations.

Before we knew it we landed our first 30-pound flathead on our own! Then came some more—and some 40s, even a couple 50s! All on our own, all from the bank.

Now, we’re disappointed with a dozen shad. We’ve learned to catch skipjack too. We’ve come a long way and keep trying to learn more and get better.

Hopefully there’s a boat in our future. We made mistakes and watched a lot of nice fish wave as they swam off after defeating us, but it made us better.

Currently, we’re in a little dry spell. We’ve only been catching channels for a couple weeks, but we’re still going every day waiting for the big one to bite.

Since we went to the James River, we have not stepped foot on one of those ponds and never will! We lost a few friends because of it, but it is so much more rewarding to catch fish from the river.

The catfish fight harder in the river and it’s more of a challenge to find the fish in their habitat. It feels so good knowing we’re not contributing to the demise of these giant natural catfish that we love so much.

We’ve even been educating other people and getting them to come out with us instead of going to pay lakes. It’s even more rewarding knowing that we can finally do for others what was done for us and prove that big catfish can be caught in the river with hard work and perseverance. We hope to reach as many people as possible and help put an end to pay lakes once and for all.

Some of our favorite memories will always be fishing on the James River and Watts Bar because those were real game changers for us. But now the best days are the ones where we go out on our own and land trophy size fish. That’s something we can be really proud of.

In the last few months, we have landed a new personal best (PB) flathead and a PB blue for West Virginia. We have also put our buddies, Daniel and Johnny, on their PB blues for WV.

If fishing becomes a topic of conversation and we show pictures, we get asked if they are from pay lakes. We say no and invite whoever it is we’re talking to out on the river with us to see what it’s all about. We’ve met a lot of people by taking perfect strangers fishing just trying to get them on the river.

Thanks for reading, tight lines everybody!