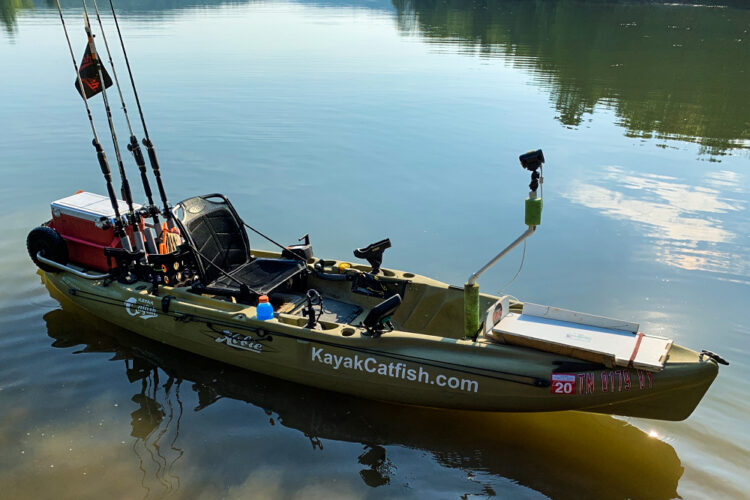 This Hobie Outback kayak is rigged and ready for tournament day.

The popularity of catfish tournaments has seen tremendous growth in the last few years. Kayak catfishing tournaments are now taking it to a whole new level.

As the sport of catfishing has continued to grow in recent years, so too has the popularity of catfish tournaments. Anglers are traveling from all over the country to compete against each other in events with thousands of dollars in cash and prizes on the line. It was just a matter of time before kayak fishermen decided to get in on the fun too.

Last year, numerous independent kayak catfishing tournaments started to pop up around the country, including a dedicated tournament series put on by Ron Himmelhaver of Trophy Catfish Kayak Anglers. It concluded with the first ever national champion being crowned on Santee Cooper.

The winner of that two-day event, yours truly, took home over $1,000 in cash and a brand new Nucanoe Frontier kayak. There are even more kayak catfishing tournament options on tap for 2020.

In order to submit a fish in a kayak catfishing tournament, a picture is taken of the fish on an approved measuring device such as a Muskie Bumper or Ketch board. There is also a unique identifier code assigned to each angler at the start of the tournament that must be included in the picture.

To ensure that fish are caught on eligible bodies of water during the designated tournament hours, pictures are required to have a date, time, and GPS stamp.

Most kayak tournaments use the TourneyX app for fish submissions. This allows the judges to view and verify the fish in real time. The app also has a live leaderboard. This creates some drama and excitement for the competing anglers as well as making it fun for others who may be following along with the tournament from home.

Competing on a budget

A quality kayak can be purchased for under $1,000. You also don’t need a gas guzzling truck or SUV for a tow vehicle. Because kayaks are so lightweight, they can easily be hauled with the smallest of cars.

This low cost of entry makes kayak catfishing tournaments a great option for anglers who want to fish competitively but may not have the means to do so in a boat tournament. It is also good for new people entering the sport who may be interested in competitive fishing. They can try it out to see if they like it without having to plunk down a large sum of money upfront.

Conservation is the key to sustained tournament success

By not having a weigh-in, fish aren’t subjected to added stress by being kept in cramped live wells for long periods of time. With the catch, photo, release format used in kayak tournaments, fish are released within seconds after the photo is taken. In addition to being released quickly, fish are also let go in the same spot from which they are caught.

When people hear the word tournament, the focus is often centered around the competitive aspect of it. What anglers in the kayak catfishing tournament community will tell you though is that the competition is just a small part of the experience.

The friendships you will make and the fellowship you will share at these events is far more rewarding than any money or prizes you could possibly win. There is just something magical about getting pulled around by a huge catfish while riding on top of a small plastic kayak. It is an adrenaline rush like no other. Having a community of people to share that excitement with just adds to the fun of it.

For more information about how you can get involved in kayak catfishing tournaments, check out trophycatfishkayak.com. There you will find the tournament schedule and official rules. With tournament season just getting underway, there is still plenty of time left to get in on the action this year. I hope to see many of you at the national championship on Wheeler Lake this fall!