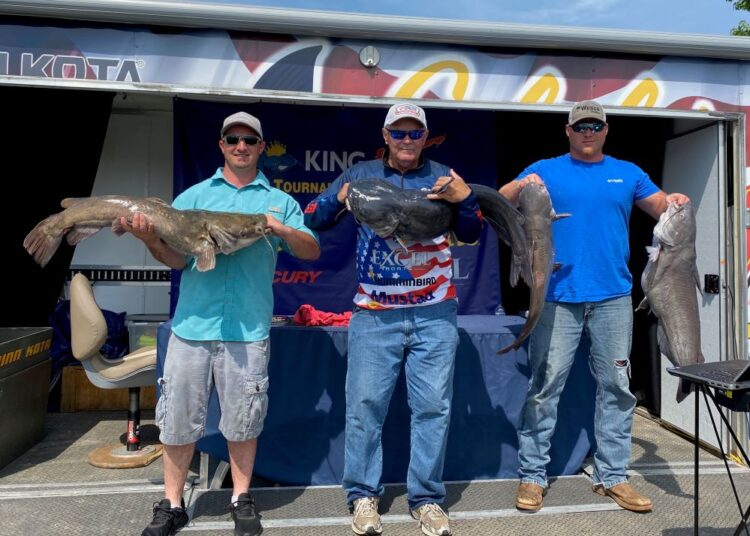 The weigh-in at Buster Boyd Access in South Carolina (SC) was hot and humid with temperatures in the 90’s. Winds were variable from the NNW at up to 8 mph. Even though the weigh-in was held in SC, the North Carolina rules still apply. Teams could weigh a 5 fish bag. It could include 2 blue over 32 inches with a 15-inch minimum all catfish.

Results for the Top Teams

The three-man team of Jim and Rick Page from Newberry, SC and Alex Summer from Clinton, SC teamed up to win the top spot at Lake Wylie. They broke the 100-pound mark with a bag weighing 104.22 pounds. They earned an award of $1,800. Their bag included Big Kat of the tournament at 29.46 pounds for an additional $300.

“The weather started out in the mid 70’s but there wasn’t much cloud cover so it was close to 90 by 11 o’clock,” reported Jim Page. “We started out on anchor targeting fish in 8-15 feet of water using gizzard shad as bait. We missed a real big fish first thing that morning and we didn’t put our first fish in the live well until about 9:30.”

The team started targeting structure on ledges in about 15 to 25 feet of water and they put a flathead and a couple of blues in the well. Then, about 11 o’clock they started dragging baits in the main river channel.

“We found a good stretch of the lake that had a few fish staged and ready to eat,” continued Page. “We caught four more blues on the first drag including the 30-pounder that ended up Big Fish of the tournament. We were able to upgrade our two big blues and cull a 21 and 23 pounder.

“By one o’clock we had our five fish in the well and were close to 100 pounds,” revealed Page. “I have fished lake Wylie before and knew if we got close to 100 pounds we had a chance at a decent finish, especially this time of year. But there is some tough competition in this trail and you never know what is gonna’ come to the scales, so we didn’t let our guard down.

The boat traffic got ridiculous as the day went on. It made it tough to fish with the big waves rolling in every few seconds but the fish were not as affected as the anglers and continued to bite. The team was able to catch a couple more fish including two teenagers that were the perfect unders, and they culled an 8 and a 10 to put them over the 100-pound mark with about an hour left in the tournament.

“We threw only big baits after that, trying to upgrade our big fish,” concluded Page. “With no luck on the big fish, we made our way to the weigh-in site. That was a feat in itself with close to 500 pleasure boaters in a two-mile stretch of lake. We made it to the weigh-in site with healthy fish and were able to walk away with the win and Big Fish of the tournament. Thanks to Cabela’s and the other anglers that fish this tournament trail.”

The runner-up spot went to Paul S. Cypher JR and Bill Stewart who made the trip from Butler, PA to fish Lake Wiley for their first time. They brought 88.74 pounds to the scales to earn the second-place prize of $700. They never put a line in the water prefishing, they just scouted.

“Since we had never been to Wylie before we got down a day early,” reported Cypher. “We scanned all day on Friday. We discovered one spot we both liked and a few other backups. We got to that one spot in the morning and prepared everything for start time.”

“When the time came to fish, we dropped lines and put the Anvil Rods to work,” continued Cypher. “We stopped and got fresh shad at Jamie K Outdoors as we always do when we’re down this way. We worked ledges and humps all day pulling Spread Em’ Planer Boards. We were fishing water that ranged from 10 to 30 feet deep and it worked for us, even in the hot, spawn, pleasure boater time of year.”

“All we can say is that once you trust yourself, your equipment, and your electronics the day goes smooth and good stuff happens,” concluded Cypher.

David Kingsmore from Prosperity, SC fished solo to take the third spot at Lake Wylie. His third-place bag weighed 70.32 pounds and earned a check for $425.

Kingsmore fished a 3 1/2 mile stretch below the weigh-in at Buster Boyd Access. He fished towards the river and mouth of a creek in water ranging from 8 to 20 feet deep. He found most of his fish on the levy and breaks.

He indicated that he was familiar with the lower end of the lake for crappie fishing but this was his first time fishing the upper lake. He spent time on contour maps looking for a spot to fish. Once on the water, he started locating them on side imaging and that’s where he fished.

“The fishing was good till’ the boat traffic got up,” Kingsmore said. “I also think they started letting water out which affected the bite. I caught 12 fish on the day, but struggled to catch 3 fish from 10 am to the end of the tournament.”

Epilogue
Tournament director, Bobby Brown thanked Brandon Black with Gastonia Tourism, Michael Anderson for all his help, and the volunteers that helped with the weigh-in. Thanks also went to Colette Brooke, Cabela’s Special Event Associate.

The 2020 Championship
This year’s Cabela’s King Kat Classic Championship will be held October 30 – 31, 2020 on Milford Lake in Milford, KS. The Classic features a guaranteed payout of $120,000 in cash and prizes. The points race is set to pay $30,000 to the top 20 places based on the competitor’s top-five finishes.