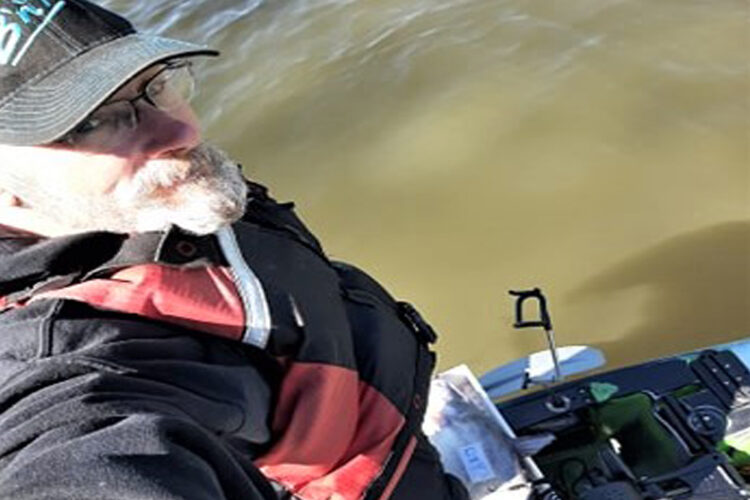 Combine catfishing and kayaks for an economical and fun way to expand your fishing opportunities.

The sport of kayak catfishing is growing rapidly as anglers discover the excitement of catching trophy catfish from a small vessel. Admittedly, part of the kayak fishing formula is the same as for any other method of fishing. Anglers still have to know where to fish, when to fish, and what kind of tackle and baits work best. So, why choose a kayak over a big boat?

Maybe the most important reason is economy. It doesn’t take nearly as large a budget to purchase a kayak and rig it for catfishing. Then, once you develop your catfishing skills and take you yak for a ride behind a trophy catfish you are hooked.

Tim Peppers is one of those anglers that joined the kayak catfishing world after being a big boat tournament angler. He doesn’t plan on giving up the big boat tournament fishing but has had a lot of fun and success in the kayak tournaments. In September of 2019, he fished to a third-place finish in the Trophy Kayak Catfish Anglers National Championship on Santee Cooper.

“I feel like I have expanded my possibilities,” Peppers said. “We love kayaking as a family and enjoy doing it often. Combining kayaking and fishing really broadened how and where I could fish.”

He still enjoys boat fishing and plans to rejoin the big-boat tournament catfishing circuit once the global COVID-19 emergency is over and public safety has returned.

“I have enjoyed the challenge of landing big fish in a kayak,” continued Peppers. “The bite seems harder and the fight is definitely more of a fight. Kayak fishing has presented many obstacles that I have had to constantly work through. But it has definitely been worth it.”

After a year of tournament fishing under his belt, the fight remains the best part of the catfish kayak experience for Peppers as he continues his quest to work through the challenges.

“In kayak fishing my vessel no longer outweighs my fish,” Peppers said. “It’s so much more of a challenge in a lot of ways. How far I can travel? How much bait can I carry? And, I had to learn how to unanchor using the strength of my boat.”

Peppers went on to name other challenges that needed to be thought out. Having less space requires planning and making choices about what to take. Tide, current, and wind are bigger factors in a kayak then a bigger boat.

“There are benefits too,” continued Peppers. “I now go into places that I couldn’t with a full boat. I am seeing some amazing scenery and wildlife. I feel closer to what I am doing.”

Peppers said that the physical aspect of kayaking makes him appreciate every weigh-in even more. If he gets tired on a long trip, for example, he can’t take a nap in the yak. He would have to bank for that. Protection from the elements is also extremely hard. There is no canopy to protect from sun and rain, or a Steady Buddy heater to stay warm.

“Kayak catfishing was just something I tried and ended up liking,” concluded Peppers. “I love the feeling of that bite and the thrill of being closer to my fight in places that have a grandeur of backdrops. It is likely to be a part of my fishing activities for a long time to come. I am hooked!”

Kevin-Scott van Vlijmen (Catterman) grew up fishing from the bank. He was never a big fan of owning a boat or fishing from one. He first became interested in kayak fishing in late 2017 and invested in his first kayak in early 2018 for very practical reasons. He wanted to have more freedom to access various fishing spots. And he didn’t want to be stuck on the bank somewhere or be competing with other anglers for fishable real estate on smaller rivers.

“With the introduction of sit-on-top kayaks and better hull technology, the kayaks of today are far more advanced than a decade ago,” explained Catterman. “They’re easier to paddle, safer all around, and definitely more stable. They also allow for a ton of storage and customization.”

He also pointed out that most states don’t require registration, insurance, or boater safety certification. Those items can also result in a cost-saving, but some individual anglers still opt for insurance and most kayak anglers are super cautious when it comes to safety issues.

Equipping a kayak for catfishing is relatively easy given the numerous products on the market. The growing sport has brought more specialized equipment for kayaks.

“There are several things available for use just on kayaks,” reported Catterman. “Pedal and fin drives have become gamechangers. Instead of endlessly paddling, we can use our leg muscles to traverse miles of water at speeds between 3-5 mph with little to no fatigue.”

Kayaks and boats do have a lot of overlap when it comes to gear. The kayakers downsize and adapt for use on smaller vessels. The goal for most is to rig their vessel so they can land trophy fish.

“Landing a big catfish in a kayak takes some skill and patience,” Catterman said. “First, it helps to be comfortable in your craft and know the stability limitations. I would not recommend using a sit-inside kayak for catfish. Neither would I recommend a kayak shorter than 10 feet with a width less than 33 inches for catfishing.”

He likes to use one of 2 methods to bring a big flattie or blue on board. First, he prefers a landing net for fish less than 20 pounds. On big fish, he prefers to simply grab the fish and pull it up and into the kayak.

“The first thing I like to do is let the fish tire themselves,” explained Catterman. “After a few runs, even flatheads tend to become lazy. Once the fish comes to the surface, bring them next to the craft and make sure all of the gear is out of the way. Now, grab the fish by the lower jaw and pull up and towards the opposite side of the kayak. This way you counteract the weight of the fish coming on board with the kayak.”

“A good kayak is still anywhere from 10 to 20 percent the price of an entry-level boat,” concluded Catterman. “Kayak fishing was kind of a no-brainer for me!”

Note: Catterman will soon be offering a kayak charter service in DC called The Catterman Adventures, LLC. It will be a full-service charter with vessels, bait, and media content supplied. Interested anglers can reach him at (202) 738-9625