Why We Catfish: A Guest Editorial by Joey Kirby 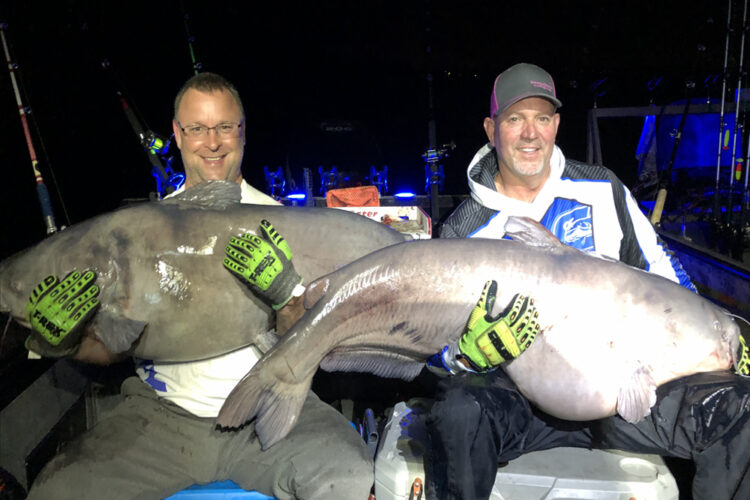 Stacey Gaston caught a 99-pound blue and Joey Kirby caught at 91-pound blue within 5 minutes of each other.

Think outside the box

My father was an avid hunter and fisherman so I grew up with his passion for the outdoors running in my blood. We mainly fished for catfish, bass, bluegill, and crappie. Actually, we fished for about anything that would take our bait. Lol.

I learned from dad that you can’t catch em’ from the couch. He taught me the importance of persistence and dedication when it came to fishing and hunting. He’d always tell me, “You’ve gotta’ be out there.” More importantly, he would say, “You’ve gotta’ love it. If you don’t love it you won’t do it long!”

It seems funny now that he calls me crazy because I love it so much and spend so much time doing it. Lol. I took fishing to another level.

I continued to fish throughout my life for various species. The more I fished the more I improved my skills. I think part of my success was always being willing to try new things.

The price of gas went through the roof around 2010. As traveling became more expensive and the nearest good fishing lakes were a couple of hours away, I sold my Stratos Bass boat and looked for a replacement.

Living in Owensboro meant that I was close to the rivers and they had good fishing. So, I made the switch to a catfish rig. I bought a small Tracker Targa that was already set up for catfishing. I recently bought a Tracker Targa 18 and set it up for trophy catfishing including plenty of SMACKDOWN rod holders!

It is definitely a challenge to hook trophy catfish and get them in the boat. But there is also a reward when you finally succeed. It is worth the effort to work at getting better.

One of the best ways to become a better fisherman is through trial and error. Since my work schedule is 12 hours long, 4 days on, and 4 days off, I have plenty of time to fish. Thinking outside the box can pay big dividends. Don’t be afraid to try that technique that makes you wonder why nobody else tried it or uses it.

For example, my go-to terminal rig has brought me and my friends great success. It is a rig that I made up myself. I credit Doc Lange and Stacey Gaston for naming it after they used it with success too. They called it the Kirby Rig and the name stuck.

It is also important to use the right equipment. Choose your rods, reels, and line with caution. Having quality equipment will increase your landing chances drastically when you finally lure that fish of a lifetime to take your bait!

I’m always looking for that big fish that will be a state record. He lives out there somewhere and I call him ELVIS. The hookup and landing are where the reward comes in. It’s a good feeling to know, that when “ELVIS the King” bites he is coming to the boat on your personally chosen rods and reels, spooled with your carefully chosen line, and tied with your rigs, and your knots. After all, it’s what you been working toward all your fishing life.

For the past couple of years, I have found great joy and excitement in sharing my passion with others. It’s awesome to take a kid fishing and share the excitement of a take down. It is gratifying to use the electronics to get them involved by asking them what the depth, speed, or water temp is. It is satisfying to make it a learning experience by watching the graph and explaining the marks that you see. That way they learn that you don’t just pull up to a spot and start catching fish.

When youngsters get on my boat, most are fired up about catching a fish and keeping it. I normally start by putting them in the livewell. But throughout the trip, I explain to them the reason why I let them go. I want them to believe that the same fish they released can grow up to be a trophy and maybe someday they could catch it as a state record. By the end of the trip, they are ready to catch-photo-release (CPR) the fish we catch!

It is equally exciting when they start to get it and ask their own questions. They are learning what fishing really is. If, when the fishing is slow, they start asking questions I feel like I have been successful. How fast are we drifting? What is the depth? Are there any fish on the screen? Do we need to change baits? Now we have them involved. I have yet to take a youngster out that was ever ready to go back to the dock!

The thing that draws me to catfishing most is the passion and love that I have grown to enjoy with the takedown, the scenery, and the serenity that I have found being out on the water!

When life gets rough, or when I get caught up in the hustle and bustle of our busy world relief is just around the corner. I can hook to my boat and be at peace on the river within 15 minutes tops after pulling out of my driveway!

Editor’s Note: Joey Kirby lives in Owensboro, KY where his home waters are the Ohio River (Newburgh Pool) and the Green River in Western KY. The 45-year-old Kentucky angler recently visited Alabama to fish with his friend Stacey Gaston for a few days. Joey serves as cohost with Stacey on SmackDown Catfishing. On one faithful night, he helped Gaston land a 99-pound blue cat. As things began to settle down from that experience, less than 5 minutes later, his rod buried and the drag started screaming. Kirby then landed his personal best 91-pound blue! The very next evening he landed another monster blue that weighed 82 pounds. He’s addicted!