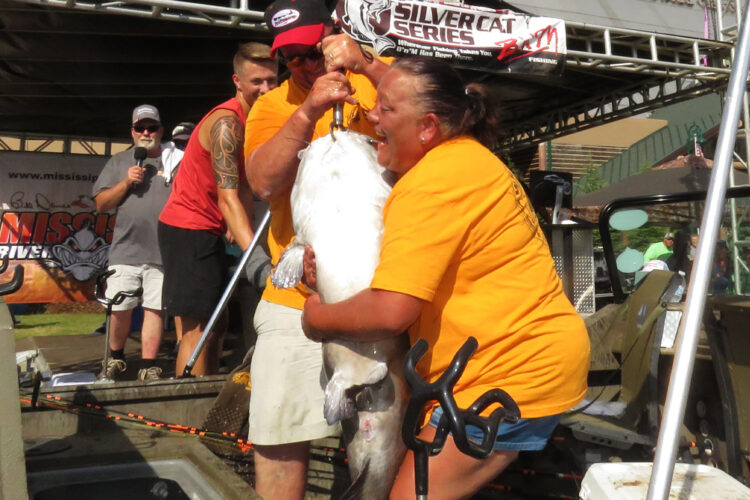 Diane Palovchik Stone speaks from experience when she says never give up. She and her husband Terry were fishing the 2019 Mississippi River Monster Tournament on the Mississippi out of Memphis.

They arrived early to prefish and develop their strategy only to realize they had lost their depth finder. Then one of their batteries died and they had to buy three to get back on the water. Several friends stepped up to loan them their extra electronics.

Admittedly, they were so discouraged at one point they considered packing it up and going home. But with encouragement, reassurance, and love from their fishing family they stayed.

Their prefishing yielded almost nothing and on tournament day they never caught a fish until about 10 am. Then, around noon Diane hooked a Mississippi River monster that ended up being the Big Fish of the tournament at 68.7 pounds.

“Catching that big blue changed everything,” said Diane. “It brought our determination back. Winning big fish for the tournament was amazing and everything else that happened seemed like nothing—not to mention how many of our wonderful anglers stepped up and offered us a depth finder to use—such amazing people.”

“Never give up,” said Diane. “Sometimes things may not go your way but when they do you realize it was all worth it. Most of all, however, have fun!”