Why We Catfish: A Guest Editorial by Amy Williams 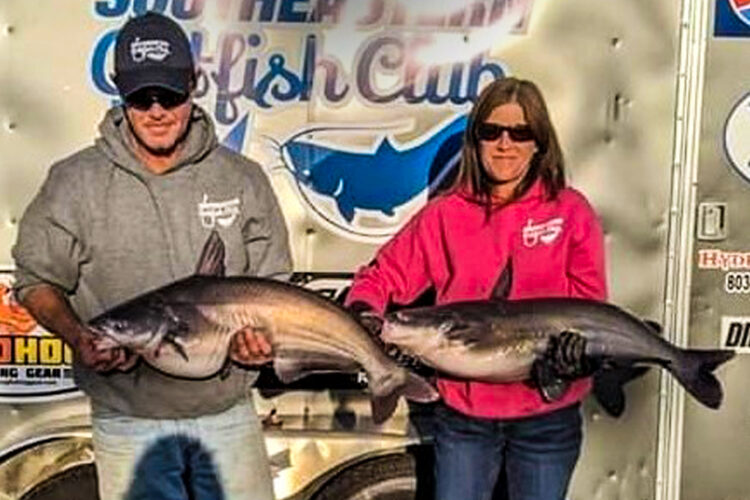 Amy and Sam began tournament fishing with the Southeastern Catfish Club. They haven’t missed a club tournament since.

Date Night on the “Toon.”

I have been fishing for as long as I can remember. My daddy introduced me to fishing at an early age and I was “hooked” after that.

I loved to fish for anything that would bite. We were lucky enough to have a pond at our house so when I was a kid, I could fish almost anytime I wanted. My daddy would also take me to Lake Wylie on the weekends and we would fish day and night at my aunt and uncle’s place. I loved every minute of it. That is where I caught my 1st catfish and made many memories.

I was lucky enough to marry a man who loved to fish just as much I do. When we first got married, we would go to Lake Wylie and Lake Wateree, which are our home waters and bank fish. We would fish for hours sometimes and not catch a thing but that was fine. Fishing isn’t always about catching, rather it is the time spent together and the memories, those things can never be replaced.

As soon as our kids were old enough to hold a rod, they were fishing with us. We definitely passed our love of the sport on to them.

My husband grew up predominantly fishing for catfish. He passed on his knowledge and love of catfishing to me and we quickly started fishing only for cats. One of our good friends took us out on his boat several times fishing for bigger catfish than what we were catching from the bank. I had only seen fish that large—never caught one.

It didn’t take us long to realize that targeting trophy catfish is what we wanted to be doing. I never knew you could catch fish like that until we went out with our friend.

Eventually we were able to purchase a boat. This was a whole new experience for us. We were able to fish areas on the water where we had never fished before. A process began where we started slowly learning about targeting trophy blues and flatheads. We have learned a lot in the last four years and are continuing to learn every time we hit the water.

About four years ago we had another friend of ours mention to us that we should come fish a night tournament that the Southeastern Catfish Club was putting on. We decided to give it a try. This was the first tournament we had ever fished and haven’t missed one since. Fishing tournaments and the people we have met along the way are probably my favorite things about catfishing.

We fish with some great guys and gals and have made a lot of new friends through our club, which I consider to be the best around. We fish nine tournaments a year with them and attend several others as well. The catfishing community is an awesome community and I am proud to be a part of it.

We also help out when we have the opportunity to take kids or veterans out for a day of fishing. It is a very rewarding experience to be able to introduce someone to fishing that may never have had that opportunity before.

I am also a big advocate for CPR. We need to let these trophy fish live so future generations have a chance to experience the thrill of reeling one in. It is definitely an experience you will never forget.

I have so many great memories of fishing, it’s hard to just pick one. I guess my most recent favorite moment came when I caught my PB blue catfish. My husband and I had gone to Lake Wylie to enjoy a night of fishing. The first spot we anchored on produced pretty good. We caught 20 fish, mostly in the high teens. We decided to move around 1:00 am to see if we could find some bigger fish.

We anchored up on that second spot after riding and looking for over an hour. I noticed two pretty large marks on the side scan so we decided to give it a try. Within 10 minutes a rod started screaming. I grabbed it out of the rod holder and held on.

After a 5- to 10-minute fight, which felt like an hour, we netted the fish. It was a whopping 66 pounds. Talk about an adrenaline rush. We took a lot of pictures and released the fish to be caught another day.

I catfish for a lot of reasons. I love to spend time on the water with my family and usually, that’s where date night takes place. I’d rather be on the water fishing than sitting in a movie theater or restaurant any day. It’s just a peaceful time, whether you catch fish or not. We fish in rain, sleet, or snow, it doesn’t matter. We have spent countless nights sleeping on our pontoon boat and plan to spend countless more. I wouldn’t take anything for that time and look forward to many more years of catfishing.

Editor’s Note: Amy Williams can be described best as an avid and passionate cat woman. She has lived in York, SC all of her 44 years and has always loved to fish. As fate would have it, she married her best friend, Sam Williams, who also loves to fish and is now her favorite fishing partner.