Why We Catfish: A Guest Editorial by Jake Jellison, Top Tactic Fishing 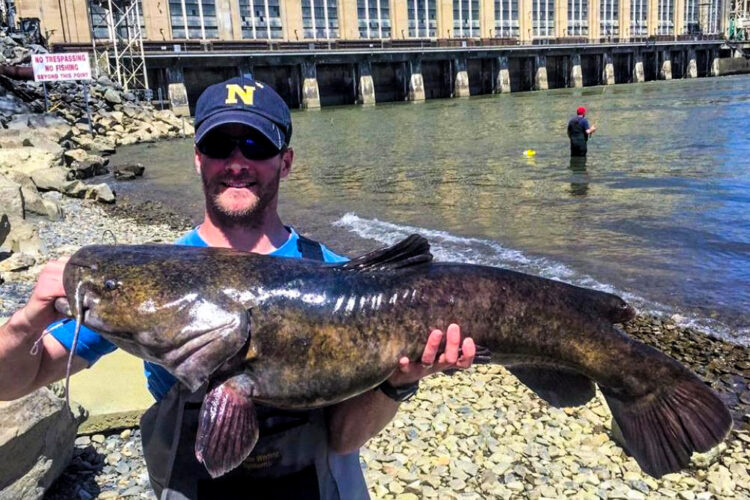 Jake is shown here with a nice flathead that he caught at Conowingo Dam on the Susquehanna River in Maryland.

Fishing for the camaraderie, fun, and sharing of the sport.

My name is Jake Jellison, I am 33 years old from Springfield, Pennsylvania. My wife Rachelle and I have three wonderful kids. I work full time as a Family Nurse Practitioner and have now been in the Navy Reserves for more than seven years.

For me, fishing started when I was six years old. I grew up outside of Cincinnati, Ohio and remember going to my grandparents’ house during the summer to stay the night and fish. My grandfather loved to fish, and he would show me the basics such as how to put the hook on my line and put the worm on the hook. Even though we didn’t catch fish every time we went out, the time spent with him and my grandma during those times were more rewarding than fishing itself.

I would fish occasionally all the way up through and past college, but I really didn’t get into fishing until I got married in 2012. My twin brother, Joe, as you might know as “Chatt Cats Fishing” was also getting more into fishing. He was living in Tennessee at the time and was learning the ropes of catching big blue catfish. Seeing his success over time in catching these big fish, I was able to learn some of his tactics.

The Schuylkill River in Philadelphia is usually where I fish when targeting catfish. The river predominately holds channel and flathead catfish. Unfortunately, there are no blue catfish in this body of water yet.

When it comes to catfishing, the most important take away is not how big of a fish you can catch. I believe that testing your limitations is the most rewarding experience in catfishing. Getting out of your comfort zone either by exploring a new body of water, using different bait, or a different rig is what helps you become a better catfish angler. While it is nice to catch big catfish, I count that as a bonus when it comes to catfishing.

My favorite catfish memory is an outing I had with my brother. He took me out on his boat for a night bite. I caught what ended up being my personal best at 42 pounds. Even though this fish ended up being my PB, it was not the reason why it is my most memorable catfishing adventure.

More importantly, I was able to spend time and fish with my brother. We never get a chance to see each other very much given that we live in different states and we each have families, jobs, etc. We make the most of our time together when we do fish and its always a blast no matter the outcome with the fishing.

Additionally, the conditions were not ideal given that the current flow was elevated. He took me to a new area that he had never fished before. We found an area where there was a barge and it ended up being a success. In my opinion, there is nothing more rewarding than catching your targeted species at a new location!

I have my own YouTube channel at Top Tactic Fishing where I focus on carp and catfishing. I enjoy teaching and giving my educational perspective for catching these fish. We all have something to learn, but remember to also just have fun. I will see you all out there. Fish on!

Editor’s Note: Jake Jellison has followed his passion for fishing since his early days fishing with his granddad, through deployments in his military career, and with occasional visits with his twin brother, Joe. Even while on a National Guard deployment to assists with the coronavirus pandemic in New York he found time to fish in Central Park. He has created a YouTube channel which he uses to educate others about fishing. You will find a link to his channel at the end of the story.