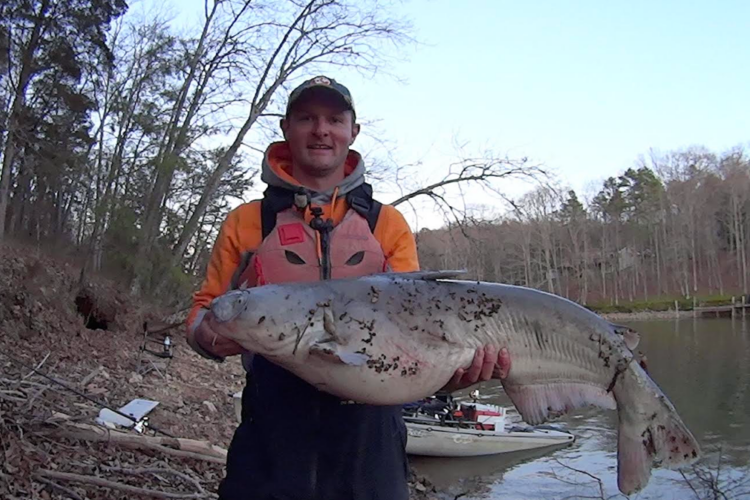 This nice blue was caught from a shoreline that was not accessible by foot.

Take It to the Bank

The experience of hooking and landing a trophy size catfish from a kayak is a thrill that is hard to replicate. It is a one on one battle with only a small piece of plastic separating the angler from the fish in the water.

For many, the intimacy and excitement of kayak fishing becomes a full-on addiction. There are others, however, who don’t get the appeal of fishing from a kayak. Anglers in the latter category shouldn’t just immediately dismiss owning a kayak though. It can be a valuable tool for the non-kayak fishermen as well. This is especially true in regards to bank fishing.

The number one complaint of bank fishermen across the country is the lack of access to places where they can fish. Shore bound anglers are often limited to fishing at public parks, boat ramps, and dams. While these locations may be convenient, they aren’t always ideal fishing spots.

Prime water where big catfish live may be out of casting distance from the best spots. Public fishing areas can also become overly crowded during certain times of the year making it difficult to even find a place to wet a line. This is where having a kayak can be a real benefit.

A kayak can allow anglers access to other areas of shoreline that aren’t reachable by foot. This not only opens up more fishing opportunities but also helps avoid the crowds. Oftentimes just moving a few hundred yards down the bank can make a world of difference in your fishing.

Fishing kayaks today are often filled with gadgets and features that not only inflate their cost but also increase their weight. It is not uncommon for a fully rigged fishing kayak to weigh in excess of 100 pounds. This kind of weight can be difficult to manage when dragging along steep or uneven shorelines. Thankfully, there are some lightweight kayaks available for bank fishermen that are much easier on the back.

The Native Ultimate 12 (49 pounds) and the Old Town Discovery 119 (56 pounds) are two lighter weight options currently on the market. Both have an open floor plan that offers a ton of storage space for hauling gear and rod holders can easily be mounted with aftermarket accessories. If price is a factor, both models mentioned retail for under $1,000 brand new but many good deals can often be found used at great prices.

Utilizing a kayak for bank fishing also allows anglers to simplify their gear. Many shore bound catfish anglers resort to using long surf casting rods and large saltwater reels with increased line capacity due to the distances they have to cast to reach the deeper catfish haunts. By being able to set up closer to the holes you want to fish, this specialty gear can oftentimes be eliminated.

There are other pieces of equipment that can be done away with as well. Molded in rod holders that are common features on many kayaks can be used in place of bank fishing holders. This is especially helpful when fishing on rocky shorelines where it can be difficult to drive bank holders into the ground.

Kayak manufacturers have realized how important comfort is to a successful day of fishing and have improved the quality of their seats dramatically in the last few years. Many of these seats are designed to be removed from the kayak and used on the shore. Since bank fishermen oftentimes carry a foldable chair with them, this is another item that can be left at home when using a kayak.

Every fisherman in the world has a story about the big one that got away. It is not uncommon to hear tales of a monster fish that got wrapped around a stump or a potential state record that spooled a reel causing the angler to miss out on the fish of a lifetime.

A kayak gives bank fishermen in these situations a fighting chance by allowing them to hop in the kayak to chase down big fish or get over the top of an obstruction to try to work a snagged fish free versus having to break it off.

Kayaks can save anglers money on tackle too. Hooks and sinkers aren’t cheap and bank fishermen tend to go through a lot of them over the course of a season. Many times, a rig can be saved by simply getting on top of it or pulling from a different direction which is easily doable from a kayak. After a few years, you might even save enough in tackle to cover the cost of the kayak.

The bottom line is that kayak fishing isn’t for everybody. That doesn’t mean you shouldn’t consider adding a kayak to your arsenal though. There are a lot more uses for it than just an on the water fishing platform.