Why We Catfish: A Guest Editorial by Timothy Daniel King 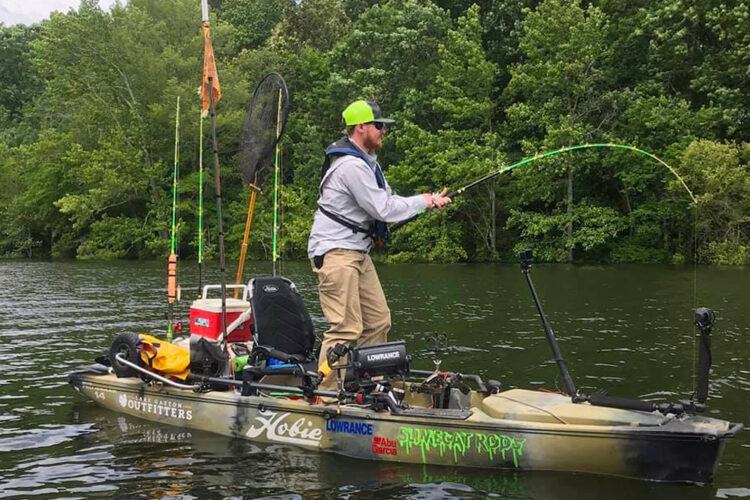 Fishing for the Challenge of Trophy Cats from a Kayak

My name is Timothy King. I am 31 years old and reside in Bullock North Carolina with my wife and son. I am lucky to be located near Kerr Lake between North Carolina and Virginia. You might know it as Buggs Island Lake. It is a big catfish haven.

I have been fishing the Kerr Lake waters since I was 10 years old. My grandfather, Robert Paynter, lives on the lower end of the lake. Fishing with him is where I got hooked on catfishing

We started out jug fishing until we met some people from Santee Cooper and they showed us how to drift fish. Once I felt the fight on rod and reel I never looked back. That was all I would ever use from that point on.

I bought a 2002 Hobie Outback Kayak when I was 19 years old. It was then that I started fishing on my own and forming my own style of fishing, some would call it an addiction.

I mainly targeted catfish on the Staunton (also known as the Roanoke River) and the Dan River. Both are tributaries to Kerr Lake. I would catch flatheads and blue cats, all the time developing and refining my fishing skills.

As I became comfortable on the smaller waters, I started hitting the bigger more challenging waters. I transferred the same tactics that worked on bigger boats to the kayak. The result was a dramatic increase in the number and size of the catfish I was catching. That success made the addiction even worse and it led to me becoming a guide on Kerr Lake and Gaston.

About 13 months ago I started shooting video of my guide trips on my GoPro Hero 5. I post the videos on both my Facebook and YouTube channel (Kings Catfishing) as a way to share and educate others about the fun of catfishing on Kerr Lake and Gaston. I intend the videos to boost my ultimate dream of being a successful guide.

My interest in fishing has given me the opportunity to take veterans out for a day through American Legion Post 45 in Clarksville, Virginia. Prior to COVID-19, we would take veterans from Durham, Lynchburg, and Danville hospitals to the lake.

The veterans could either come on the boat and go fishing or just hang out by the lake with others where lunch was served. The program allows several patients to get outside and just enjoy God’s creation. It’s not much but it’s something that I can do to show my appreciation for their sacrifices by sharing what I love to do.

I also like to take kids fishing. There’s nothing more satisfying than seeing a kid overjoyed and literally breathless while reeling in a fish. I have noticed over the last couple of years that there are very few young people that get outside and enjoy outdoor activities. So, when I meet a child that is really into it, it touches me in a very special way.

Good trips are the ones that keep me coming back for more. My most memorable Kayak fishing trip occurred in October 2019. I was participating in the Trophy Catfish Kayak Anglers (TCKA ) online tournament. It was the last day of the tournament. Luck was with me and I caught three citation eligible blue catfish and a few smaller ones in the last two hours of the tourney. It was a day I will never forget.

The action was so good and I shot so much video that it made three videos. You can see the action on my channel. The series is called Monster Catfish / Bass chaos Kerr Lake, Parts 1, 2, and 3. The adrenaline was pumping and I was howling with joy and relishing every moment. It is experiences like this that I want to share with others.

After learning to fish from the kayak I bought a boat. I soon discovered it was just not the same as fishing from a kayak and I went back. A 10-pound fish is so much stronger when you have to fight him sitting down without much leverage. Once you hook into a 40-plus-pound catfish in a kayak it will be an adrenaline rush that’s out of this world.

Those trophy cats will drag you all over the place. They spin you around and make you feel like you’re going to flip with every pull. Then when you see that big head come up you get even more excited.

With the trophy cat hooked you have to stay safe and get the fish in the boat. It’s a timing thing to reach down and grab him by the mouth and hold on with everything you have. They often slip away and start peeling drag again. Once I do land a big one, I feel like screaming from the top of my lungs in celebration of what I have accomplished and I realize why I catfish.

Editor’s Note: Timothy Daniel King loves to catch big cats from his kayak. He is a member of the Lake Gaston Outfitters and the Hobie Kayak Fishing Team. He shares his knowledge of kayak fishing with others through his YouTube channel with the intent of teaching others how to catch catfish. King is supported in his endeavors by Slimecat Rods, Nocturnal Nation, Lake Gaston Outfitters, Hobie Kayaks, Amped Outdoors, Bobcats Bait and Tackle, and Monster Rod Holders. He is following his dream to guide on Kerr Lake in a pontoon boat but says his passion is and always will be kayak fishing.