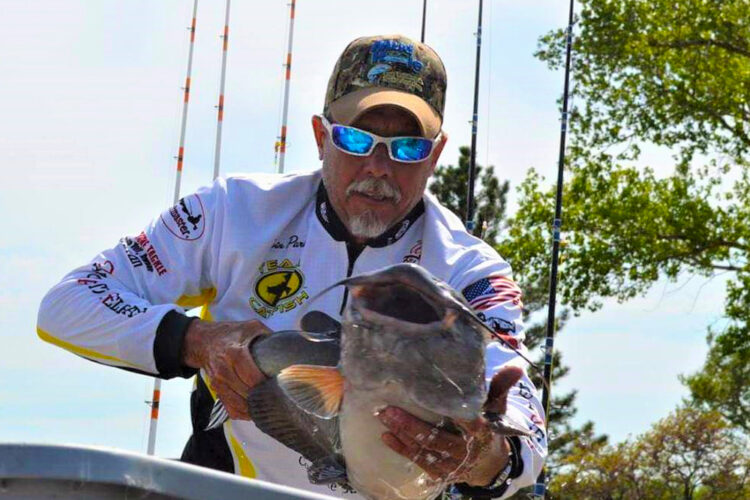 There was nothing subtle about the bite Ty Wolf got on a cool mid-October day last fall.

Trolling in shallow water on John Redmond Reservoir in eastern Kansas, he watched his planer board race across the surface, and his fishing rod bent sharply.

Has to as be a big blue cat,” Wolf thought as he fought the heavy fish.

“That fish absolutely smoked it,” he said. “She hit in only two to three feet of water. She must have  been in there chasing shad, feeding up for winter.”

The size of the channel cat didn’t come as a total surprise to Wolf, a tournament catfisherman. In Kansas, a state known for its channel catfish, fall is a great time to target the big boys and girls.

And John Redmond Reservoir in eastern Kansas is a great place to do it. The 9,400-acre reservoir is known for its extra-large size channels, annually producing fish weighing in the upper teens and low 20s.

The whiskered fish often start stirring as the water temperature starts to drop, signaling it’s time to feed up for winter.

When the baitfish move to the shallows, the channels usually aren’t far behind. They often roam the flats, staying on the move as they prowl for their food.

“I don’t usually find them stacked in one place,” said Wolf, who lives in Olpe, KS  “They might be in one general area, but they’re spread out.”

That’s why Wolf likes to troll. He usually starts his day by netting shad, then uses them as cut bait. He will use the electronics on his boat to find flats holding baitfish, then will start trolling.

The key to his success? He uses Parks Planer Boards, designed by his friend, Kevin Parks.

The devices, which clip to the line, carry the bait far off to the side of the boat where fish won’t be spooked by the boat in shallow water. He uses his bow-mount trolling motor to move as quietly as he can.

He sets the speed (usually 0.6 to 0.8 miles per hour) and automatic pilot on his trolling motor so he can work a specific contour. Then he waits for the fishing rods to bend.

“Getting the lines way off to the side of the boat is the key,” Wolf said. “When you troll straight behind the boat, you spook the fish when you’re shallow.”

“But with the lines off to the side, the channel cats might spook and move out 20 to 30 yards and that’s where our lines are going through.”

Wolf uses 80-pound test braid as the main line. He ties a swivel to that line, then attaches a 2- to 3-foot long mono leader to that. He adds a sinker slide with a 2-ounce pencil weight above the swivel and  a small peg float to the leader about 3 to 5 inches above the hook to make it float up a bit off the bottom.

There are many planer boards on the market, and they have helped anglers catch a lot of big cats, particularly blues. But Wolf is confident the homemade planer boards he uses gives him an advantage, especially when trolling in shallow water.

“When you’re fishing shallow, it’s important to have a planer board that doesn’t get hung up a lot,” Wolf said.

His fishing partner will do the same thing on the other side of the boat, so that the team has a web of lines in the water by the time they’re done.

That system of fishing shines in the fall, Wolf said, when he is probing the shallows in search of feeding channel cats.

“You’d be surprised at how shallow the channel cats will move in the fall,” Wolf said. “Sometimes we’ll catch them in just a couple feet of water.”

Though he often tries to troll a contour such as a ledge, a channel or any other change in bottom contour, he knows it all boils down to one fact. Find the shad and you’ll usually find the channel cats.

That mobile fishing style is what Parks had in mind when he designed his boards several years ago. Planer boards were nothing new. They have been used for years by fishermen chasing everything from walleyes to Great Lakes fish. They also made a splash in the catfish game, with tournament fishermen using them to catch big blues.

But Parks wasn’t satisfied with the models he tried, finding that they often hung up in shallow water. So, he designed planer boards of his own design with a foam top and an aluminum bottom, and he began catching big blues and channels on them.

When the word got out, he started selling them and they became an immediate success.

“I still make them one at a time in my shop,” said Parks, a welder by trade. “I want to control the quality.”

Parks has caught blue cats as big as 80 pounds and channel cats in the mid-20s on his planer boards.

“I will troll as long as the water temperature is above 50 degrees,” he said. “Below that, they usually won’t chase a bait.”

Wolf finds his best fishing from mid-September to early November. That window might be extended or reduced by the weather. But in the heart of fall, trolling can be a deadly pattern.

“Channel cats are eating machines in the fall,” Wolf said. “Cold fronts and calm conditions will shut them down. But as long as there is a chop on the water and the weather is pretty stable, you can find some great fishing.”