Why We Catfish: A Guest Editorial by Mike Greenwell, Greenwell Fishing 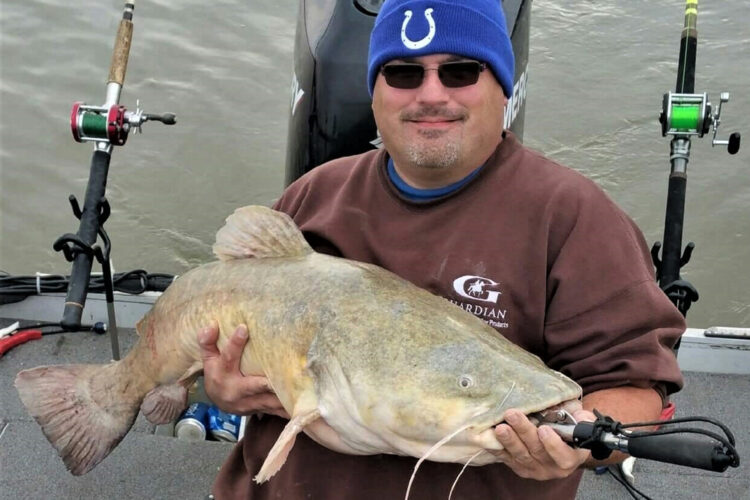 Shown here with a nice flathead, Greenwell enjoys showing others how to catch fish like this.

Still Chasing that Big One

I never fished as a kid. It was about 5 years ago and about 3 years after making the decision to be sober that my addiction changed from a bad one to a good one. My cousin invited me to go out on his little jon boat. We fished some pits in a local Fishing Wildlife Area.

That trip to the Bluegrass FWA with my cousin sparked my interest to see what our local river (Ohio River) had in it. It was May of 2014 and I was brand new to fishing. I went to Walmart and bought a Zebco 606 combo. Every chance I got after that I went down to the Evansville Riverfront to fish.

One night I was sitting down there on the Riverfront with my Zebco baited up with chicken liver. My rod was straight up in a spring-like rod holder that I had pushed down in the tar between the cracks of the sidewalk. I watched while that rod started bending over.

The rod just kept going until I heard a loud pop and then it came shooting straight back up. The 12-pound line that came on my Zebco had snapped like a twig. I learned that I didn’t have the drag set. It was way too tight! Lol. I’ve been chasing that fish ever since!  Of course, I have upgraded equipment, learned a little more, and moved on to do more tournament fishing.

I lost that big fish in Sept of 2014 and fished my first tournament in October of 2014. It was a JKV tournament out of Owensboro, KY. I fished with Scott Mattingly and we finished 8th out of 27 boats. Our weight included my new personal best blue cat at 15 pounds and I was hooked even deeper.

In 2015 I had the chance to buy a buddy’s boat for a great price and I jumped on it. After I got comfortable with the boat, I started fishing a few smaller tournaments. I was able to meet a few good people in the catfishing world and by fishing with them I was able to learn a lot!

The next year one of my buddies asked me to go to the very first Mississippi River Monsters (MRM) with him. It was 2016. I was excited as all get out. We didn’t do well but what an adventure that was. I knew there were going to be more tournaments in my future.

Since then I have won a few tournaments and placed 12th in the 8th annual (2017) Monsters on the Ohio tournament in Owensboro.

As my experience grew, my awareness of fish care grew too. I saw many anglers practicing CPR and it became very important to me. I smile like a kid every time I catch a nice fish. Putting the big fish back so maybe a kid can catch it when it’s bigger is an awesome experience for me.

Now I take people fishing just for fun. It is an opportunity to pass on what I have learned to others. I took a guy from work who’s a bass fisherman. A 15-pound blue cat is a huge fish to him. We caught about 15 fish that night and he had a blast.

One of my good memories includes a guy I met through Facebook. He and his wife were getting into catfishing and my tournament partner had something going on. I ask the guy to fish a tournament with me at my home ramp. He agreed and I taught him how to bump for catfish and we won that tournament.

A few weeks before, a buddy had put a 28 pounder in my boat and that was the biggest fish to date until I caught a 37-pound blue cat for the big fish of the tournament. I still remember that rod slamming down in that rod holder.

That was my first bigger tournament win. I Had won a few smaller pot, 1 fish weigh-in tournaments, but this one was memorable because it was a 5 fish weigh-in and we took the win and big fish that day.

Fast forward to 2019. My partner and I won 4 of the Poorboy catfish tournaments, and I had won a JKV tournament also. Success just makes me want to fish more and I have grown to want to include kids.

I have taken several guys and their sons out. They enjoy getting on some fish to remember. But my most memorable moment has to be when we got 3rd place in the very first Poorboy Benefit Tournament. The benefit was for a young lady who was there at the event. We boated a 31-pound blue and she wanted a picture with me and that catfish. That memory will last forever!

Think of all those memories. The thrill of fishing the river; that rod bending in the rod holder; knowing it could be anything from a 1-pound channel cat to a monster blue or flathead; and seeing the smiles on the kids. I have fished with many people from experts to beginners and one thing gets us all excited. We can’t wait until that next bite! And that is why I catfish!

Editor’s Note: Mike Greenwell can be described as a self-made catfish angler. Once he made the decision to catfish, he kept his eye on the ball and became truly hooked on the catfish game. Once the hook was set it led directly to a liking for tournament fishing. With the Ohio River as his home waters, he developed his catfishing skills in the shadow of one of the nation’s most popular tournaments. He lives in Evansville Indiana near the Newburgh Dam and just 20 miles downriver from Monsters on the Ohio in Owensboro, KY. He produces a YouTube channel named Greenwell Fishing where viewers can see his fishing memories.