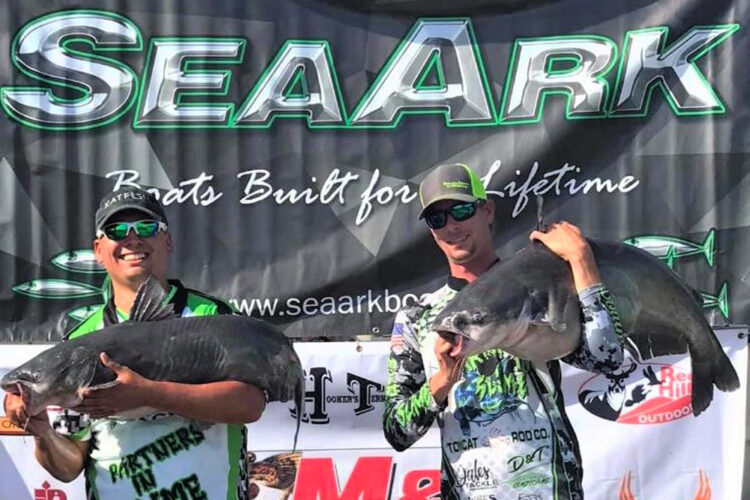 Finding Peace in the Outdoors

His friends call him Bobby. With his 35th birthday approaching Aaron “Bobby” Churchwell looks back on his catfishing experience with pride and contentment. As he looks forward, he anticipates an adventure in diversity.

From his hometown of Joplin Missouri, he served a stint in the military and now lives in the Greater Atlanta area. Except for his time in the military, Churchwell has always been into fishing, especially catfishing, but the real passion came when he started tournament fishing.

“I started fishing when I was young,” revealed Churchwell. “I grew up fishing creeks and ponds in the southwest corner of Missouri. Occasionally we would go to Riverton, Kansas, or Grand Lake in Oklahoma where we would catch eater size blues and flats for the dinner table. When I was five years old, I knew I had a true knack for fishing. I always chose fishing over hunting anytime I had the opportunity.”

“A lot of people have influenced me to become the angler I am today,” continued Churchwell. “I am always listening to other anglers and picking up new things to try. My stepfather would probably be the one that influenced me the most though. Every trip with him was a chance to learn something new or try something new.”

Churchwell’s willingness to try new tackle and techniques is likely the reason that friends and other anglers see him as they do. He is known in catfish circles as an angler who is able to catch fish wherever he goes.

“I honestly love going to a new body of water,” Churchwell said. “It is a challenge to pattern the fish on new water. Sometimes it gets old going to the same body of water over and over again.”

From his base In GA a four-hour drive will land him on Wheeler Lake in Alabama or Wateree and Santee Cooper in the Carolinas. He spends a lot of time on the Tennessee River and on the Coosa River which he considers his home water.

Churchwell joined the army when he was 18 and didn’t fish much while on active duty. But when he got out of the military, he found what he described as “peace” in fishing and being outdoors. In fact, it was after the military when his true addiction to catfishing began, and it related to tournament fishing.

“My passion for catfishing started about six years ago,” Churchwell said. “I had a friend invite me to fish a tournament with him on the Coosa River. From that point on my drive to fish tournaments started. Now my passion continues as I watch the sport grow and I find more opportunities to share new techniques or new ways to target fish with other anglers.”

Churchwell views catfishing as a community of anglers with similar values and goals. He sees tournament fishing as an opportunity to share and compete.

“I fish tournaments because of the competition,” explained Churchwell. “At the end of the day, it’s all about who pattern the fish the best or just got the luckiest. But it is more than that. I love the crowd. I love the people. I love the other anglers. Catfishing is like a huge family. We’re all out there to win, but at the end of the day we are all there to help each other too.”

Churchwell understands the importance of conservation and fish care. He is a steadfast supporter of selective harvest and CPR. His passion for catfishing and his loyalty to conservation makes him eager to help others learn the proper procedures for taking care of the fish.

“I think conservation is key in any fishing sport,” suggests Churchwell. “There are enough people in this world that if we do not practice selective harvest, we can deplete any species of fish. We have already seen it firsthand on the Ohio River and it is happening other places too. Anglers can make a difference and they need to educate others on the importance of conservation.”

Looking to the future, Churchwell wants to continue to learn all he can about being a better angler. But at the same time wants to help other anglers learn the sport.

“I want to be remembered as the greatest catfisherman alive,” joked Churchwell. “Not really, I’m just kidding. I think it would be awesome to be remembered as someone that was always willing to help and/or teach other anglers to be better at what they do.”

“I would be lost without fishing,” continued Churchwell. “Robin says I am more dedicated to fishing then I’m dedicated to her. The reason I love the sport is because of the brotherhood. The catfish community is like one continuously growing family. I honestly believe that my health or old age would be the only things that would ever stop me from catfishing.”

“My biggest goal is to help grow the sport in a positive and professional manner,” concluded Churchwell. “I think we should all strive for the same goal. There’s too much negativity that revolves around catfishing today.”

As a proud veteran, Aaron “Bobby” Churchwell was a natural fit with Leslie and Troy VanDerau’s Heroes Outdoor Therapy (HOT). Hot is an organization dedicated to supporting veterans by coordinating their travel to various outdoor events. They network with other outdoor-friendly organizations to cover travel expenses for the veterans.

Aaron and Leslie met on social media because of their common interest in the outdoors and probably the fact that they were both veterans. Now, Aaron enjoys a relationship with HOT as an angler.

Leslie’s post was an occasion Churchwell could not pass up. He messaged his friend and invite her to fish with his team, Partners in Slime. It was Leslie’s first catfish tournament. Now, HOT is well known and active at various catfish events and in the catfish community.

“We have been amazing friends ever since,” Churchwell said.