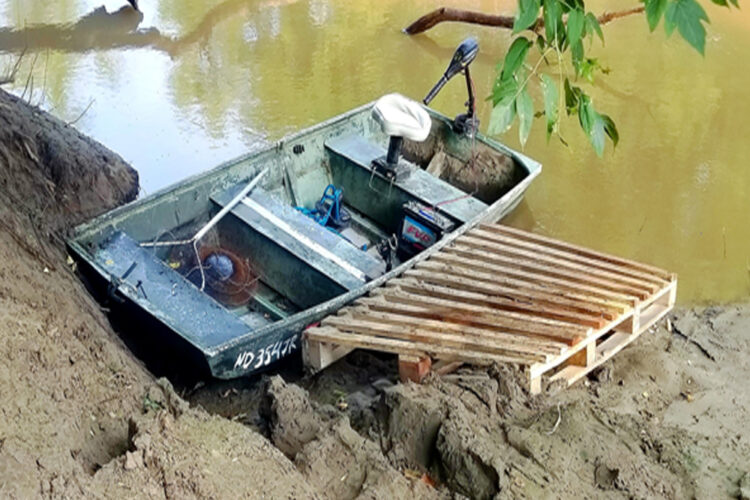 A small boat can lead to big possibilities.

Like many rivers around the country, my home river has a healthy population of channel catfish. Shore fishing is a fine way to spend a few hours and catch a few fish, but by utilizing a small aluminum Jon boat, practically unfished waters can be enjoyed.

It does not take a fancy boat to fish small rivers effectively. A variety of small craft can work, including canoes, kayaks, and Jon boats. When selecting a small craft, the first issue to address is safety. The boat must be stable, as well as being outfitted with personal flotation devices.

The size and weight of the boat are also something to consider. While a fourteen-foot boat may be wonderfully stable and comfortable, if it can’t be safely landed in the water it is worthless. My river has steep banks and silty soil, requiring some serious work to get the boat in the water. For that reason, I use a ten-foot aluminum boat I don’t mind getting dented or dinged.

My river is lined with a variety of tree species, growing at the highwater mark. In addition to contributing to the beauty of the location, the trees serve a utilitarian role as well. Tired of dragging my boat up the bank under the summer sun, I knew there had to be a better way.

Retiring to my garage, I rounded up a 2’x4’, some bolts and screws, and an aluminum winch. I made a pedestal for the winch by attaching the boards into a V-shape. Ensuring everything was snug and strong, all it took was a pair of ratchet straps to attach the winch to a handy tree. By attaching the hook at the end of the line to the front of the boat, I could easily pull it out of the water and up the bank, barely breaking a sweat. Best of all, it attaches to a tree anywhere along the water, making it portable as well.

Even small rivers can possess strong currents. If the plan is to drift downstream every trip, a simple set of oars is all that is needed. I prefer to be able to fish both upstream and downstream, and paddling against the current is not something I want to undertake. While a small outboard motor would work well, I don’t want to have to mess with a separate fuel tank.

My knowledge of outboard engines is rather sparse, and I could imagine monkeying around with a balky motor for hours. My choice to push the boat is a transom-mounted trolling motor. When fishing alone, the battery acts a ballast towards the front of the boat, and it doesn’t require gasoline and oil. Keeping the battery on a trickle charger all summer ensures its ready to go when I am.

My friend Ryan Thorson had been interested in spending a day on the river. On a beautiful mid-week day, we launched the boat and started to fish. Rather than running up the river against the current and floating back, we decided to go with the current for nearly 8 sinuous river miles before pulling the boat up the bank into my pickup. Dropping the truck off at the take-out point, we only had a 10-minute drive back home. Traveling on the water, we planned on spending 8 hours. Slipping down the silty bank and getting seated in the boat, we were primed for some action. Ryan pushed off the bank and we were in the current.

Within sight of my house, I dropped the anchor into the silty brown water. It took a moment to catch, leaving us 20 feet from a large snag. With three rods for the two of us, we hooked up a different bait on each one. I had scarcely settled into my seat when the rod to my left slammed down towards the water. The fish stayed deep near the snag, giving me a great fight before finally surfacing. Ryan deftly handled the net and brought aboard the 26-inch fish. It was a great way to start the day.

A few hours in the float, with the morning sunshine still cool on our faces, we ran into a problem that would have thwarted a larger boat. Guiding the boat around a corner, with my eyes on the bank searching for raccoon tracks, Ryan’s shout stole my attention. Stretching completely across the 40-foot wide river was a massive cottonwood tree. Brush and debris had built up around it, and the river ran under the mess.

Idling around the brush, I was unable to find any way to slip by it. With no other option, we beached the boat. Up to our knees in soft river mud, we portaged the boat around the snag. Twenty minutes of hard work had us back on the water. Had we been fishing out of a larger boat, we would have had no option but to turn back for home.

It seems that each day on the river is different than the last. Usually, I can count on dip bait to be the start on any given trip, but it was outfished three-to-one by cut goldeye. Ryan worked his way through a carton of nightcrawlers, catching plenty of the fish. The fish on the crawlers ran quite small, with only a few breaking the three-pound mark.

The sun had reached its peak, settling towards the distant horizon when we anchored up upstream of a hole. The bank had sloughed noticeably, indicating the water was quite deep. The anchor seemed to take forever to hit bottom, and we tossed our lines out. A few minutes into our wait my rod was nearly pulled out of the boat.

Starting to reel, I knew immediately that it was a big fish. The previous week I had fished the Red River with famed guide Brad Durick, boating my personal best channel that weighed nearly 23 pounds. While this fish wasn’t that large, it was feeling much bigger than anything I had caught before on my river.

Slowly the fish rose in the current, and when it surfaced both Ryan and I gasped. It was a giant. As it slowly neared the boat, Ryan readied the net. Just as it was close enough to net, it produced a tremendous splash and sounded. It took me a moment to realize that it had pulled the hook and was no doubt back at the bottom of the river. Being too old to cry, there was nothing to do but laugh over our misfortune.

As is usual when undertaking an extended float, the day quickly passed by. Content with a great day fishing, we zipped towards the take-out point. As boat traffic is exceedingly rare on the river, the wildlife didn’t seem to know what to make of us. Canada geese honked noisily on sandbars, flying around the bend to land. Time after time we flushed the same flock. Wood ducks whistled overhead, and beaver splashed down the bank. Whitetail deer stared at us before snorting and dashing back into the woods. It was a beautiful day to be alive.

With two people, getting the boat out wasn’t difficult. Rather than hooking up the winch, we decided to manhandle the boat off the water. I pulled the boat up the bank while Ryan pushed. Loading the boat into my pickup, with both of us covered in river mud and smelling of fish and bait and sweat, a passerby would have guessed that they were witnessing two large children playing Huck Finn and Tom Sawyer. I wouldn’t have disagreed with them.