“The Painted Catfish of South America” by Larry Larsen 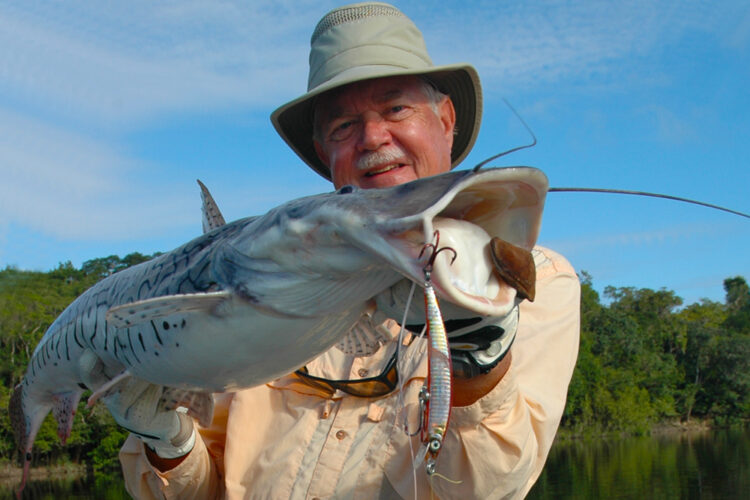 “The Painted Catfish of South America”

The most beautiful catfish in South America are formidable, resemble a painted canvas, and readily strike lures!

My partner and I were taking a break from casting in the 95-degree Equatorial heat by slow-trolling a couple of giant 1 1/2-ounce Super Traps. We had checked out most of a large lagoon off the Rio Cumina when our Indian guide turned the boat into the narrow, 200-yard long cut back toward the river. We never made the exit.

Our rods buckled simultaneously as powerful fish took off, fortunately in opposite directions. After formidable battles, we each pressured our fish to the boat and finally netted a “double” — two 12-pound “painted” catfish that the Brazilians call Surubim.

We turned the boat and made another pass and two more fish slammed our huge vibrating plugs. We landed one of the colorful fish that time. We made two more passes and again had strikes and landed more of the speckled/striped cats. Then we shut down the small outboard and started casting our lures to the productive stretch of water.

We let our giant ‘Traps’ fall in the water column about 12 feet to the bottom and slow cranked them back to the boat. About every fourth or fifth cast, the big plug never made it. The short, narrow channel from the lagoon to the river was loaded with catfish. In just 45 minutes fishing the cut that afternoon, my partner and I landed about 20 feisty surubim weighing from 8 to 16 pounds!

Focusing on The Hideout and Fight

On another trip the following year, the sun was just peeking through the jungle trees as I lofted my 5-inch long minnow bait toward a long bar at the mouth of a quiet lagoon. I cranked the reel a couple of times to position the Yozuri near the sandy bottom in three feet of water. My rod jolted with the tremendous strike and I hung on to what I knew was a giant fish.

Like other cats in South America, a surubim will boil on the surface during a fight but won’t clear the water’s surface with a leap straight up. Often, they are on the bottom in relatively shallow waters moving about slowly in search of forage. They don’t have far to charge to the surface but usually, they will bull it out in the depths, provided there is plenty of room there.

My big fish headed straight for the deeper river channel, stripping line from my baitcaster. I had no idea what species it was. After more than a 10-minute struggle, I finally gained much of my line back and pulled the fish to the surface about 15 feet from the boat. Long whiskers waved at me as I worked it in toward the guide’s waiting net.

My partner and I laughed at the strong 22-pound striped catfish and admired the beautiful fish resembling a black and white canvas with painted hieroglyphics.

My guide unhooked the fish and pointed out that it interestingly had a 3-inch circular chunk of its skin missing, revealing red meat. Querying my guide about the large hole in the fish’s side, he answered, “boto”, meaning that one of the river’s freshwater dolphin had recently taken a bite out of the big fish. Although we were trying to catch peacock bass in the Unini River Basin that morning, the catfish was a very welcome diversion.

Artificial lures like the giant Rat-L-Traps, large crankbaits, oversized spoons, and most big swimbaits are all very effective on the painted cats. I have caught numerous surubim catfish averaging between 10 and 35 pounds on lures while fishing different river systems throughout South America, even those rocky rivers having rapids and swirling currents. The “leather fish” tend to congregate in small areas where forage is present or moving through confined channels. There are often so many hungry catfish present in fact, that it is easy to focus on them, as I have done often.

There are two Surubim species, plus the Pintado, and all are occasionally mis-identified as one of the others.

The Cachara Surubim, which has a “zebra” pattern, can exceed 150 pounds and are more available in lower water (dry season) times.

The Caparari Surubim has a “tiger” pattern with thicker stripes and is often called “El Tigre” in most bordering South American countries.

The Pintado, a similarly painted catfish, sports a dark, bluish-gray back and white sides with black “dots” or fawn-like markings all over. They grow to over 180 pounds.

The 3 catfish species, Pintado, Caparari and Cachara, are all commonly called “surubim” or “suribim” (also a common spelling) by locals from various areas around the Amazon. They inhabit the shallow waters of the watershed’s rivers and adjacent lagoons. The strikingly-patterned fish often school up in low water on the inner bends of the rivers and in the deep holes as well. The best fishing for the biggest catfish is usually early in the morning and just after sunset around the dark moon phase.

On several occasions, I have heard stories of anglers in my party being spooled by giant painted cats as they fished cut and live baits on 12/0 hooks off the fantail of the mothership we were aboard. The best fishing for most of these catfish is usually at night and on cut bait. Cadete is a small pacu fish that makes excellent bait, as does whole piranha, Peau (a common forage fish), and small payara (or Dracula fish).

Fishing the baitfish live can be a fun experience; the guide initially takes his machete to the jungle bank, cuts down a 7-foot branch, cuts off all bark, and ties on 8 feet of monofilament line and a small hook. Then, with a paddle, he scoops decaying leaves in 6 inches of water up on the bank and picks out tiny minnows that are buried in them. He then uses the minnows to catch the larger baitfish, which in turn are put on giant hooks and fished under balloons.

The bait selection process may seem primitive, but it works. Surubim are usually eager to grab a live fish that they can get in their mouth and provide a heck of a battle!

Notes of Interest About Brazil

Official Name: Federative Republic of Brazil
Capital: Brasilia        Population: 190,000,000
Climate: Varied; predominantly subtropical
Language: Portuguese         Currency: Reals
Area: 3.3 million square miles; the fifth largest country in the world
Amazon:  Contributes 20% of all freshwater to the world’s oceans. It discharges more water than the Nile and the next seven largest rivers in the world combined!
Wet Season: Varies from South to North; Most rivers in the country may rise 30 to 60 feet and inundate vast areas of up to 60 miles from the main channel.