Caleb Like, Brian Like, and Morris Arnold Team up to Win Bama Blues on Wheeler with 137 pounds in their three-fish limit. Their bag included Big Fish at 82.95 pounds.

The first tournament of the season for Chris and Cory Ramsey (Pipeline Tackle) took place out of Rogersville, AL, and Joe Wheeler Lodge on Wheeler Lake.

Registration was limited to 100 boats, and 100 teams registered for the January 2, 2021 event out of First Creek Ramp. The mandatory captains meeting was held at the Joe Wheeler Lodge. The tournament was a 3-fish limit with only two overs. At the end of the day, sixty-four teams weighed in.

The 67,100-acre lake is created by Wheeler Dam and provides catfish anglers about 60 miles of Tennessee River to fish. The northern Alabama lake is known for its huge catfish and it did not disappoint the Bama Blues anglers and spectators at the weigh-in.

The day started off chilly but with calm winds that made it more bearable. The days preceding the tournament were characterized by lots of rain and high winds. The official weather records show a low temperature of 38 degrees and a high of 58 for tournament day. 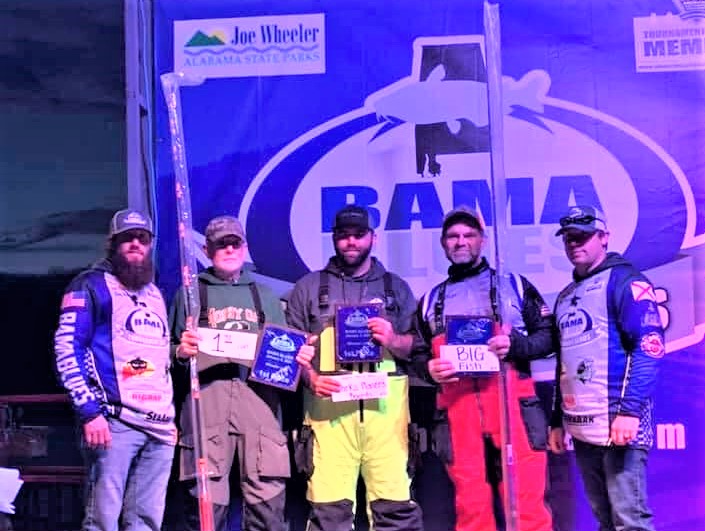 The top spot at Bama Blues went to Caleb Like, Brian Like, and Morris Arnold. They made the trip to Wheeler Lake from Indiana to compete at the popular Alabama lake.

“I had to work New Year’s Eve,” reported Caleb. “I got off work around midnight and we headed for Alabama. We arrived in the early morning and met up with some friends from Indiana.”

The team launched their SeaArk shortly after daylight on the first of January. They spent the first hour prefishing and then spent the rest of the day scanning and marking fish. They returned to the lodge to get some rest from time on the road and running without sleep for quite a few hours.

On tournament day they targeted one area and stuck with it the whole day where they found the fish tight to the bottom.

“We work the area over a section at a time,” explained Caleb. “Mainly we were dragging baits on planer boards and caught a few unders in the first hour or so of the tournament.”

They began using various sizes of skipjack in an effort to find out what the fish were wanting. By day’s end, they had caught fish on all sizes of bait, so there wasn’t really a pattern that they determined.

“We ran Carolina rigs with peg floats,” continued Caleb. “We were dragging baits in water that ranged from 45 to 55 feet of water. The weather had most of the fish we caught buried in the mud.”

Their third fish was the 82.95 pounder that held up as Big Fish of the tournament. They were pretty excited by now as they followed with a few more unders and then caught a 43 pounder for their second over. They were on their way to the winner’s circle.

“We would like to thank all of the staff at Bama Blues,” concluded Caleb. “They did a spectacular job with their first big tournament. We would also like to thank our friends and sponsor Cory and Chris Ramsey from Pipeline Tackle for always going the extra mile to support our team.”

The runner-up spot went to Josh Brown and Trevor Nederhoff. They didn’t do any prefishing the week preceding the tournament. Brown wanted to leave a couple of areas alone that he had guided on the week prior. Circumstances prevented them from prefishing right before the tournament.

“To begin the week our Hummingbird was stolen,” revealed Nederhoff. “That eliminated our ability to do any prefishing or scanning.”

The day before we had heavy rainfall and strong SW winds,” reported Brown. “The wind tends to move bait and fish on this lake. Everywhere we fished on tournament day had heavy winds the day before.”

Recent cold weather had the water temperature low. Tournament day started off with air temperatures in the upper 40s to lower 50s. The water temps were running about the same at 48-50 degrees and the winds had calmed to nearly zero. It was a flat kind of day.

According to Nederhoff the team started out dragging baits. Since the dragging didn’t produce any fish, they started anchoring on small pieces of structure and that paid off. The team’s strategy was to fish a spot for 30 minutes max, and if they didn’t catch a fish they moved on to the next spot.

“I think the anchor fishing was working because of the low water temps,” continued Brown. “The low temps had the fish lethargic and not actively moving around much. They were only eating tiny baits; we threw skipjack heads the size of a half-dollar all day long.”

“We were rigged with a 3-way swivel tied to the mainline,” added Nederhoff. “We clipped a sinker to one end and added a two-foot-long hook leader. Our fish were coming from 25 feet of water where we were fishing on the bottom with no floats.”

The team caught seven fish on the day and only one was an under. The overs ranged from about 25 to their biggest fish of the day at 64 pounds. The one under they caught weighed in at 14 pounds to make their three fish limit. Their weigh-in fish pulled the scales to 130 pounds and claimed the second-place spot. They both thanked the Ramsey brothers for running a great tournament. 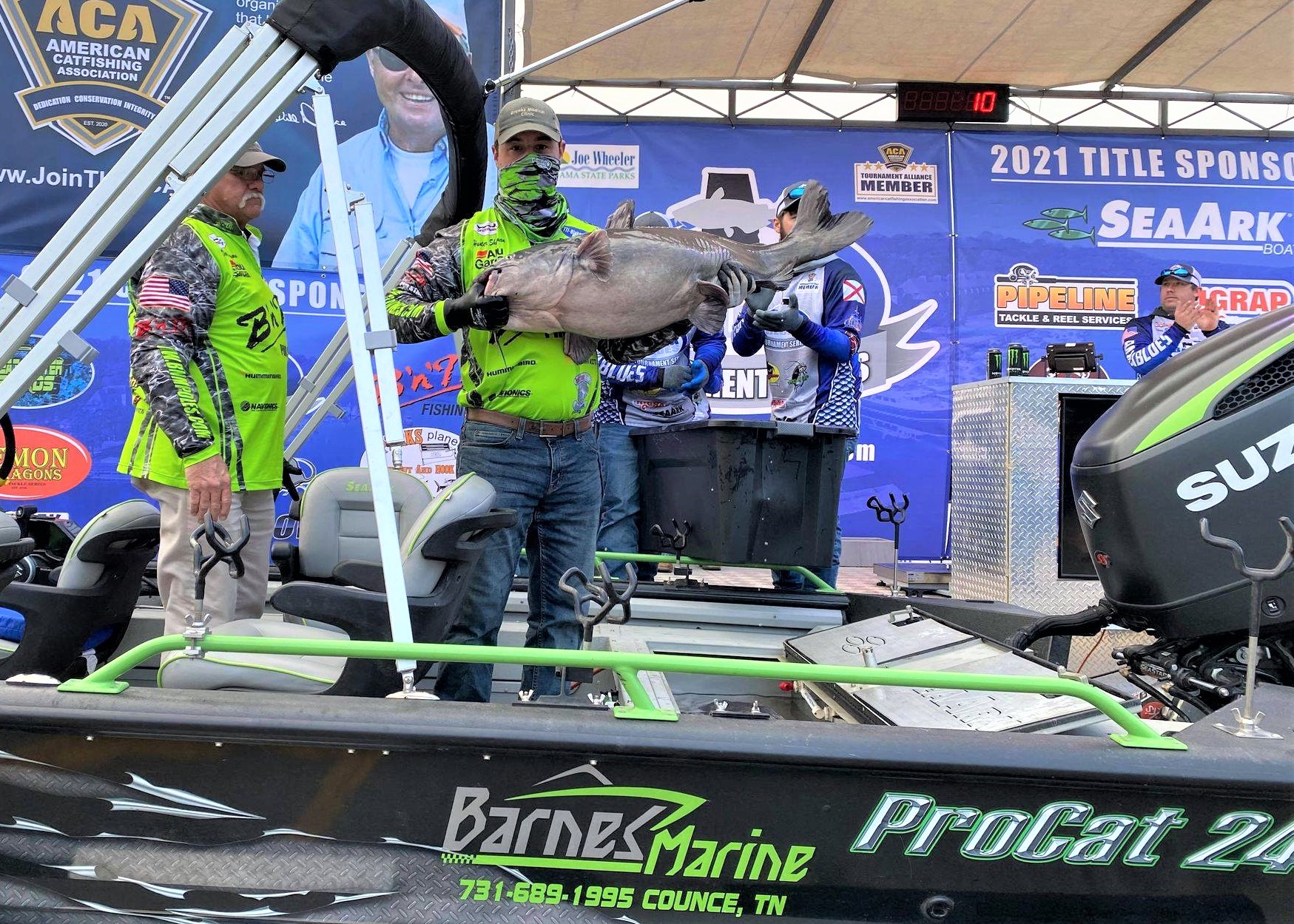 Third place went to David and Hunter Shipman from Corinth, Mississippi. They pulled their SeaArk ProCat 240 up to the scales with a total weight of 122.70 pounds.

“We didn’t prefish,” reported David. “We just went to one of my brush piles. It sets in 27 feet of water on the river bank drop off. We marked a few fish before fishing time so we just spot-locked above the brush.”

When it came time to fish, they suspended two poles off the front of the boat with fresh bloody skipjacks. Next, they rigged up with 1-ounce sinkers off the back of the boat and slowly let the current take the bait back towards the brush piles.

“I’m always gonna’ be in some structure,” explained David. “We rigged up using only one hook so as not to hang in the brush too much. I don’t think we hung up one time”

“We caught the first fish quickly,” recalled David. “It went 16 pounds. Then about 8:30, we got one around 55 pounds. The next one came about lunchtime and was a 50-pound fish. If we didn’t get a bite after sitting in the brush a little while we would reel in, put on some new fresh bloody bait, and go again.”

Even though it was a slow bite they decided to stick it out on the one spot. Just before quitting time Hunter caught a 26-pound fish.

“We had a couple more bites that didn’t hook up,” concluded David. “But the day turned out pretty good for us. Not a lot of fish but some good ones.”

“We are very humbled at the outpouring of support of the entire catfish community for our first 100 boat event. The catfishing industry is booming and we are very proud to have the Bama Blues Tournament Series setting as one of the top events of the southeast region. Thanks to all the anglers, sponsors, and our crew for the support and we look forward to an exciting 2021 season.”

The Wheeler Lake event was a great start to the 2021 season. Chris and Cory Ramsey will now turn their attention to the Bama Blues Tournament Series for 2021. For tournament information, follow them at https://www.facebook.com/BamaBluesCatfish.