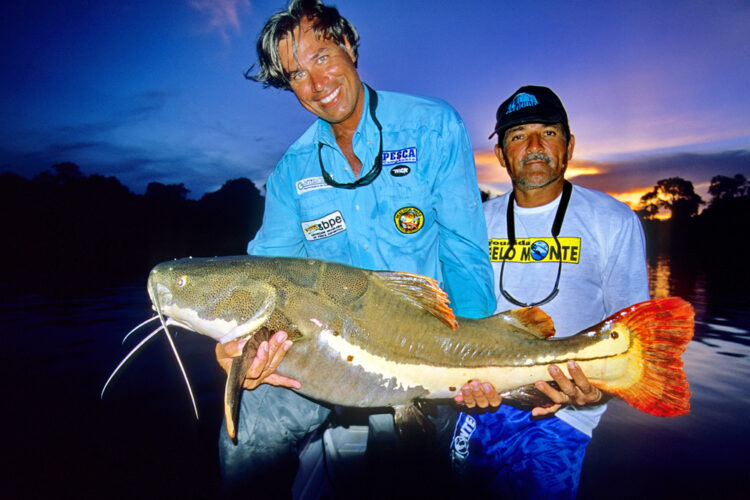 The final photo of the trip was also the most memorable: Ian Sulocki (left) and Manasses Aranha posing at sunset with Ian’s 65-pound redtail catfish. (Keith Sutton Photo)

My Catfishing Adventure on the Xingu River

For the whiskerfish angler, a trip to the Xingu is a trip to paradise.

Some trips are memorable because of the people you meet or the fish you catch. Others stand out because they happen in places that are exceptionally beautiful. Few trips stay in your mind because they contain all three elements, but such was the case when I visited Brazil’s Xingu River in 2004.

The Xingu flows 1,118 miles through Mato Grosso and Para states. My visit took place on a stretch of the clear-water river near Altamira, a sultry city of 60,000 just three degrees south of the equator. My goal was to catch as many species of Xingu catfish as possible. But, to add an extra measure of adventure to my trip, I went during April, the peak of the rainy season, when the Xingu reached levels unseen during the previous 30 years. Few American anglers have ever fished there during high water.

Getting from my home to the river was an adventure itself—more than 4,600 miles of air travel over three days—Little Rock to Atlanta to Miami to São Paulo, Brazil, to Campo Grande to Cuiabá to Brasilia to Belém to Altamira. Then, a 40-mile drive along the treacherous Transamazonica Highway, a muddy track through the jungle that led us to our final destination at Belo Monte Lodge. There I met my fishing companions for the week, angler Ian Sulocki and guide Manasses Aranha, two of Brazil’s most knowledgeable catfish anglers.

When I first gazed out at the river, I wondered if this would be more of an adventure than I anticipated. The Xingu looked like the Mississippi during a 100-year flood, with only the highest branches of 150-foot-tall jungle trees still visible above the water. The only dry land for miles around was the mountaintop on which we stood.

We used two kinds of bait: small fish like piranhas and sardinas, and the minhocucu, a Brazilian worm the size of a small snake. I had baited my hook with the latter and was listening to the booming calls of howler monkeys when the first catfish hit. To my delight, it was a species I had never seen.

“A pacamao!” Ian said—an unusual catfish he was eager to show me. It was a froggy-looking creature with big bulging eyes. Long, knifelike fins on its sides can lock down on the fingers of unsuspecting anglers, which I learned the hard way.

My second catfish was another unusual species the locals call cuiu-cuiu. Its body is fully armored and decorated with numerous spikes. I did not know it at the time, but the one I caught was a species never before described by science, as photos later proved.

Flat-whiskered catfish loved Ian’s 2-foot-long worms. He caught dozens of these comical looking cats, each with six long whiskers surrounding the mouth, whiskers as long as the catfish itself. In 2001, he caught the all-tackle world record in the Xingu, an extraordinary specimen that weighed 16 pounds, 15 ounces.

Redtail catfish were amazingly abundant, too, and hardly an hour passed during my four days of fishing that one was not caught. We landed several 10- to 15-pounders, and many smaller ones. All fought hard, and all greeted us at the water’s surface with unusual belching sounds.

The piramutaba—a sleek catfish with long filaments on its fins—we found schooled on an inundated sandbar. Ian and I landed several of these powerful cats.

The mandube, or palmito, also proved quite common and easy to catch. Unlike most cats, it has no whiskers. Its broad mouth resembles a duck’s bill.

The tiger surubim, or cachara, proved more elusive than other species. Manasses was eager for me to catch one, but it was late the third day, raining hard, when I finally succeeded. We admired the beautifully barred skin of the magnificent 20-pounder and released it back into the river.

In all, we caught seven species of Xingu catfish, each more interesting than the last. But it was the last catfish, a spectacular giant hooked just as the sun was setting, that all of us will remember most.

Ian smiled and enjoyed a long battle with the powerful fish, but finally he pulled the huge redtail catfish to the surface. The cool water could not extinguish the brilliant flame of its blood-red tail, a tail that provided a convenient handle for Mana. The little guide quickly boated the enormous fish.

The sunset swirled with a palette of violet and gold, the perfect backdrop for a snapshot of this stunning fish. Ian smiled as he and Mana lifted the 65-pound brute. I pushed the shutter release and captured an unforgettable image of the last minute of my last day on the Xingu, a wonderful end to an adventure I will never forget.

The Brazilian government is planning to build what would be the world’s third largest hydroelectric project on the Xingu River. As one of more than 60 large dams being planned for the Brazilian Amazon, Belo Monte Dam would divert the flow of the Xingu River and devastate an extensive area of the Brazilian rainforest, displacing over 20,000 people and threatening the survival of indigenous tribes.

Belo Monte will be one of the largest, most devastating infrastructure projects ever to be built in the Amazon if it continues. As its cost estimates rocket skyward and the extent of its impacts over the Amazon become more evident, it is clearer than ever that Brazil doesn’t need Belo Monte, and that the project will bring destruction—not development—to a unique region.
The fight against the Belo Monte Dam has reached a critical juncture where the survival of the rainforest, the river and indigenous people hangs in the balance. For more information, visit www.amazonwatch.org.