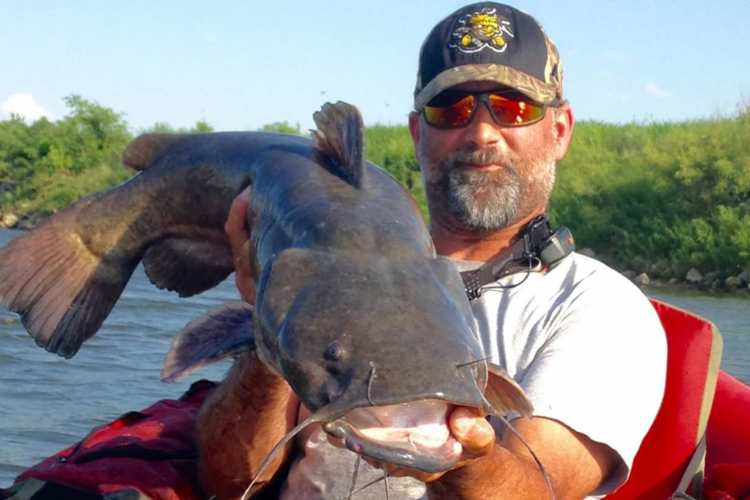 Teaching the World to Respect Flatheads

The journey started for Keith Severns in Wichita, Kansas. Now 45 years later he’s still exploring the same Kansas countryside that hooked him early in his life. His profession of 35 years as a licensed Land Surveyor in the state of Kansas has multiplied his opportunities to familiarize himself with the state that he calls home.

Although flatheads on artificial bait are his true passion, he’s happy to catch other species too. Like so many other passionate anglers, Severns started fishing early in his childhood with his father.

“I was age 5 when my father introduced me to bass and bluegill,” recalled Severns. “I can’t thank him enough for that. Those early years were amazing times! It was some of the greatest bonding moments a father and son could have. When he took me to the lake, I felt like a kid in a candy store. The whole experience of watching a bobber and worm go down or wading around the water while trying to fool fish with artificials was wondrous to me. After that, it became a constant quest to be able to get as good as my father.”

Severns described his mind as “…like a brand-new sponge…” as he soaked up as much information as he could. He read every fishing magazine or book that he could find. And he watched every fishing show that the family TV could get.

“The more I learned, the more my passion grew,” he explained. “I was constantly hounding the Ol’ Man to take me to the waters. My passion for fishing soon exceeded his, and so did my skills. I quickly found waters within bicycle distance to practice and fuel my new love and obsession.”

The years have not dampened the passion, only changed the presentation. Now a float tube is his vessel of choice and artificial lures are his preferred bait as he chases the whiskered fish, especially his favored flatheads, in the waters near his home.

“After fishing what seems like every waterway within a 200-mile radius, you would think that the exploration part for this area would be over,” commented Severns. “That is far from the case. Wichita has more waters than I could ever fish.”

In addition to the Arkansas and the Little Arkansas Rivers, he targets two nearby reservoirs. He often fishes Cheney Reservoir to his east and El Dorado Lake to his north. His area also has an abundance of deep sandpits, ponds, small lakes, creeks, and floodway canals. All these possibilities feed his passion for fishing and add variety to his catches.

“I am a multi-species angler and love to catch anything with fins,” confessed Severns. “But I have this special affinity for flathead catfish. I just think they are prehistoric and one of the coolest species on earth. I think of the flathead like they are the sharks of the freshwater world. They are fascinating to me and there is this aura of mystery about them.”

Severns’ addiction to flatheads began in 1987. He was jigging up some crappie out of laydowns along a floodway when the unexpected happened.

“I was float tubing from laydown to laydown,” recalled Severns. “I was vertical jigging with small jigs and plastics. I hit a promising brush pile and something clobbered the small offering. It felt way too big to handle on an ultralight with 8-pound test, but I got lucky when the fish swam out of the brush.”

Now in open water, the fish pulled him around all over the place, sometimes spinning his tube 360 degrees. For about 20 minutes he hung on for dear life. Then the fish headed back for the brush where he was caught.

“I tightened the drag and was flipping my swim fins like crazy to hold him,” explained Severns. “He nearly spooled me as he made it back to the brush. I felt him wrap once so I just held tight for 5 minutes.”

Severns knew that if he gave up any more line the fish would wrap him more. He remained patient and the fish finally unwrapped and came free.

“I was able to turn him out of the brush,” continued Severns. “The fish was finally tuckered, and I brought a magnificent 30-pound flathead onto my lap. I sat there for a moment after releasing him and wondered what I had missed all these years by chasing the wrong species! This was the moment that changed everything for me and began my addiction to flatheads.”

As Severns aged his passion for flatheads grew along with his respect for the conservation of all species. Especially the older, bigger flatheads that have defied countless odds just to survive.

“My conservation philosophy is simple,” explained Severns. “I am all for the time-honored tradition of table fare but prefer doing it while practicing the concept of Selective Harvest.”

When reminiscing about his best days on the water Severns thought of days with his boys when he started passing down his fishing knowledge to them; days that involved personal bests; and days where he didn’t catch anything but learned a lot.

Severns enjoys passing along his fishing knowledge to others. In fact, he is known in several catfish circles as “Sensei” which translates to teacher.

He describes his passion for fishing as an almost overwhelming desire and desperate need for more. Somewhat like an addict, but the Tug is his Drug.

“Fishing is pure therapy to me,” said Severns. “As I’ve grown older (I’m 50 now) I’ve realized it’s not just about a fish on the end of my line. It is about losing yourself in the magnitude and magnificence of Nature herself. It is about the challenges of putting together the puzzle pieces of the hundreds of variables and decisions to be made, with every day being a new puzzle.”

Keith Severns’s passion is far from spent. He has always enjoyed “piddling” with different lures and experimenting with different presentations, all the time studying fish behavior. He is sure to continue his experimentation and bring more flathead knowledge and tools to the rest of us.
“In the future, I would really like to bring my knowledge of scents to the forefront,” Severns said. “Possibly I will come out with my own line of flathead scents.”

He would also like to open a fishing school for youth anglers. His idea is to get kids off their video games and teach them about nature and the art of angling. A youth fishing school could open new passions within them just as Severns father did with him.