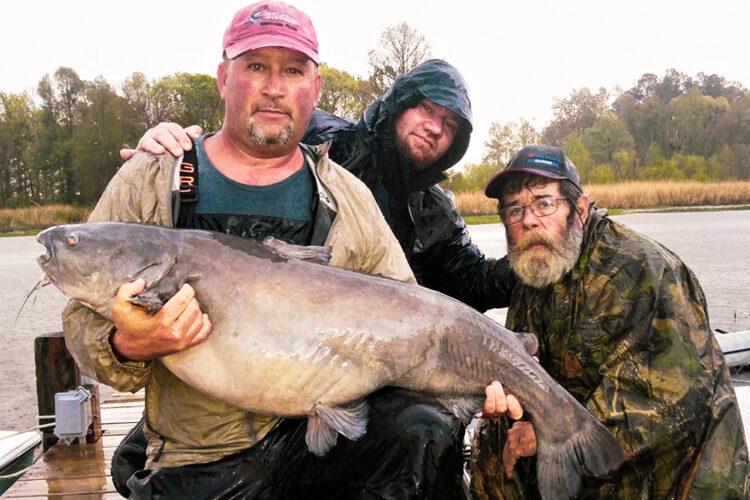 Doug Cole is shown here with Ronnie Johnson and Will Lowery. They won the first Santee Cooper Monster Quest in 2017 using the drift rigs that KC showed him.

Straight from the Horse’s Mouth

One man’s solution answered hundreds of angler’s questions—how to drag bottom without hanging up.

The Santee Cooper Drift Rig is one of the most popular, if not the most popular fishing rig used today for catfishing. The most popular version is a circle hook tied to a leader with a peg float slipped on the leader and pegged about 8 to 10 inches above the hook. A barrel swivel connects the main line and the hook leader. A slinky weight is added to the swivel on the top eye. Mainly used for drifting or trolling, it has been adapted to other types of fishing like anchoring or bottom bumping. It is a versatile rig.

The Santee Cooper Drift Rig was developed and perfected by Mr. KC Nelms, a frequent catfish angler on Santee Cooper back in the 80’s. If you ever fished any of the Randolph’s Tournaments on Santee in the 80’s you would have heard of KC Nelms. If you fished the 2020 Santee Monster Quest you heard of him, He won 1st place total weight and Big Fish of the tournament.

KC and a bunch of his buddies from the Hartwell, Royston area of GA travelled to Santee Cooper back in the 80’s to catfish. Local anglers recall names like Ed Smith, Jerry Whitfield, and several other men from that area. As a young teenager, Doug Cole lived in Cross, SC at the time these guys were fishing Santee Cooper.

Doug hung out with these guys and learned everything they knew about catfishing. When these guys first started going over to Santee, they didn’t fish the lakes, they fished in the canal or the river below the dam in Moncks Corner. When fishing the canal or river they used a typical three-way rig with a drop weigh. They would either anchor or drift the canal bumping along the bottom in the current.

KC got tired of pulling anchors and he didn’t like fishing the canal. He started venturing out into the lake. Before Santee became known for its catfish, it was a striper fishing lake. The techniques for striper fishing was to drop live baits straight down under the boat and let the wind push you around. If the wind got up too much, and we all know the wind can get up on Santee, they would switch to anchor fishing.

KC could avoid the anchor pulling by fishing the lake for catfish just like he would striper. He just let his three-way rigs drag along the bottom. He started catching some good fish, but he was getting hung up a lot and breaking off.

He wanted to figure out a way that he could drift and not get hung up so much. His first change was to get away from the three-way rigs. He started using the basic Carolina rig with a weight on the main line tied to a swivel leader and hook. This seemed to help, and he experimented with different types of weights looking for the one that worked best.

He wondered if this setup would spook the fish, but on his first trip out he got his answer. He started catching more fish and hung up less. This improved rig was working so well he won both Randolph’s tournaments in 1986, 1987 and 1988.

When KC was not fishing the tournaments his fishing buddies Ed Smith, Jerry Whitfield and Doug Cole were using his rig and they were wining in KC’s place.

When KC came into to the marina’s he would hide or cover up his equipment to conceal his rigs. An angler noticed the float on his rods and asked him what the float was for. He told them he was crappie fishing.

After winning the Randolph’s tournaments in 1988 the tournament director called KC and asked him not to enter any more tournaments for a while. In fact, a new rule was established that if you won a tournament you could not fish the next two.

KC found the final piece of his drifting rig in 1988 when he went salmon fishing in the Kenai River in Alaska. He joined a guide on his boat and noticed that the guide was using the same rods and reels that KC used at Santee. The guide was also using the same rigs with the float on the leaders. The only difference was the weight.

KC discovered that the guide’s weight was a nylon cord filled with lead shot. The local anglers called them a Slinky Weight. The guide explained that they would be drifting the river and the bottom had a lot of rocks. He used the Slinky Weights to keep from getting hung up in the rocks. This was the last piece of the puzzle for KC’s drift rig.

I started fishing the Santee Copper Lakes in the mid 1990’s. All the Santee guides that I knew of were using this rig exclusively. When you go there now it is hard to see a boat fishing for catfish that does not use these rigs. From my very first trip until today the Santee Copper Drift Rig has been the go-to fishing rig to catch the trophy catfish that Santee has to offer.

Different versions of this rig have been coming out over the years. Companies have been started and new markets developed because of the Santee Drift Rig. Different types of floats, different styles and sizes of weights, and even planner boards to pull the rig have been developed and put to use.

Thanks to KC for thinking outside the box and developing the Santee Drift Rig that so many of us now enjoy using. It was especially good to see him come out of retirement and win the Santee Monster Quest this year!