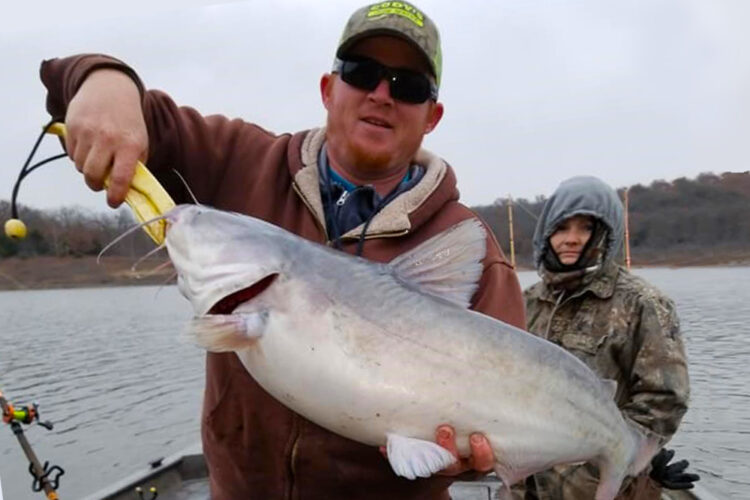 Guide Cody Vannattan knows that winter is prime time for catching big blue catfish at Missouri reservoirs Truman and Lake of the Ozarks.

Dealing with the Winter Blues

It’s a bone-chilling January morning, and most Missouri catfish anglers are staying inside. But not Cody Vannattan, a popular guide at Truman Lake and Lake of the Ozarks. Bundled up in winter clothing, he is in his boat, taking another group of fishermen out.

In January? To the uninitiated, that might seem like the worst month to chase big blue catfish.

“A lot of people think that catfish stop eating when it gets cold,” he said. But they don’t. The blues won’t be as active as when the water is warmer but they’ll still eat.
“Last year, January was my best month for guide trips. We had big fish almost every time out.”

Vannattan has the photos on his Facebook page to prove it— 50-, 60-, even 70-pound blue cats that are as healthy as you will see.

His scheduling book also serves as proof. He is booked solid in January and into February with warm-blooded souls who are willing to endure the cold to get in on some hot fishing.

“We’ve had days when we had to break ice to get out on the main lake,” he said. “But if you dress for it, it’s not so bad. And my customers warm up when they start reeling in those big fish.”

The winter bite starts when the water temperature drops to 44 degrees, according to Vannattan. That’s when the blue cats at Truman and Lake of the Ozarks often start to school and feed up for a long, cold winter. But it’s not an aggressive bite. The fish often lay in the mud and move only when they need enough food to sustain themselves.

“The blues aren’t going to chase a bait, and they’re not looking for a big meal,” Vannattan said.

That’s why he anchors or ties to a tree to keep the bait stationary and uses only bite-sized offerings.

“Their metabolism slows down so much that they’re not going to expend a lot of energy,” Vannattan said. “They’ll just mosey along and eat something here and there. I’ve had the best luck with small baits, cut bait about the size of my thumb.”

Vannatan often finds the big blues grouped in the channels. That might be 30 to 40 feet depths on the lower end of Truman.

“Even in that deep water, a lot of times they’re right on the bottom, which makes them easier to catch,” he said. “They’ll be in those channels in the summer, too, but they’re suspended.”

Farther up the lake, the blues will still relate to the channels, though at shallower depths, which can make them harder to catch.

At Lake of the Ozarks, Vannattan fishes from the 70-mile marker down in the winter.

“The blue cats follow the shad down lake in the wintertime,” he said. “That’s where all the big creek mouths are, and that’s where the shad will go.”

Vannattan starts his day by throwing a castnet to catch shad. He then cuts them up into small chunks and starts his search for big catfish. He relies heavily on his electronics, his Humminbird 1199 and 1197 units. He will use side-scan to pick up fish relating to channel edges.

“I don’t drop a line until I see fish on my electronics,” he said. “You have to do a lot of graphing in the winter to find fish and stay on them.”

Once he marks fish, he will often swing around and get within a long cast of those fish and tie to a flooded tree, nose his boat onto shore or drop anchor.

He uses 8-foot-long Meat Hunters rods and Shimano Tekota reels with 80-pound test braided line. He uses 3- to 5-ounce weights, depending on the depth he is fishing. He adds a leader with a hook about two feet above the weight so that his bait will float up off the bottom.

Vannattan will give each spot 35 to 40 minutes. If the fish don’t bite, he’s off to another spot. Even in the winter, he isn’t satisfied until his customers catch at least 15 to 40 catfish a trip.

At both Truman and Lake of the Ozarks, there is a slot limit on blue cats. Fish measuring 26 to 34 inches must be released, and the daily limit of 10 may include only two fish measuring 35 inches or longer.

The best winter bite lasts from January into February most years. The key factor is the winter shad kill. When large amounts of baitfish start dying from the cold water temperatures, the bite also dies.

“There is just too much food in the water,” advised Vannattan. “But until that happens, the large Missouri reservoirs can produce some outstanding winter action.”

For Vannattan, guiding for big blue catfish, paddlefish and hybrids is a year-round job. He and his wife Jessica also own Cody’s Bait and Tackle outside Warsaw, Mo. When Cody isn’t on the water, he’s often is at the shop, talking fishing with customers.

“If you want to learn what’s going on with the catfish, my shop is the place to be,” concluded Vannattan. “There’s usually a lot of fish stories being told.”

For information on the blue cat fishing at Truman and Lake of the Ozarks or to inquire about guide trips, call 660-723-5115.